How Much Cash Are Corporations Really Hoarding? 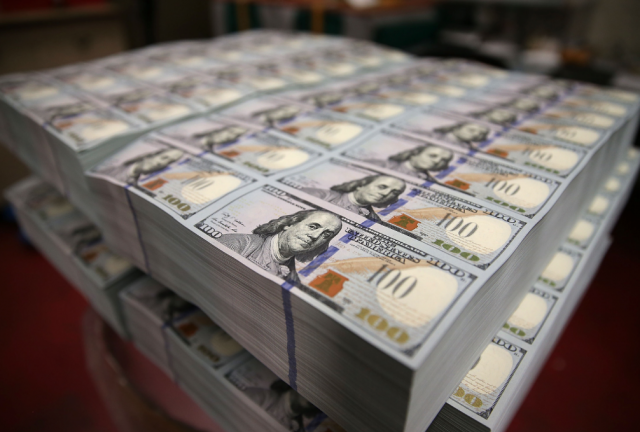 Corporate America is the standard punching bag for criticism exercises across the nation. No matter the topic, major corporations are often seen as financial heavyweights that constantly hit below the belt, at the expense of everyone else. In recent years, corporations have been called cash hoarders not willing to spend money on the country’s future. While this may be true to some extent, the full scorecard provides a less unanimous decision.

How much cash is hitting corporate balance sheets? A new analysis from FactSet finds that cash, measured by cash and short-term investments, for S&P 500 members (excluding financials) totaled $1.43 trillion at the end of the fourth quarter for 2014. That is a new record high and a $200 billion increase from a year earlier. On the other hand, before we start booing and hissing at that trillion-dollar figure, which routinely lands in headlines, more context is needed.

The infamous cash hoard is not equal. Out of the 10 sectors in the S&P 500, only six posted a year-over-year increase in cash balances, while four logged a decline. Furthermore, five of the 10 companies with the highest cash balances at the end of 2014 were in the information technology sector: Microsoft (NASDAQ:MSFT), Google (NASDAQ:GOOGL), Cisco Systems (NASDAQ:CSCO), Oracle (NYSE:ORCL), and Apple (NASDAQ:AAPL). These five companies alone account for $284.9 billion of the total $1.43 trillion found on S&P 500 balance sheets. The top 10 companies holding the most cash account for $505 billion. 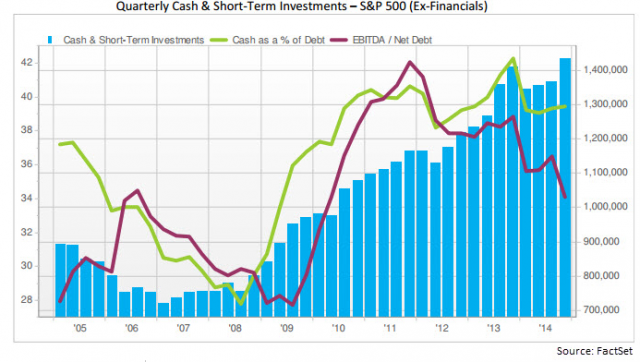 As any accounting student worth his or her passing grade will explain, there is more to a balance sheet than assets. In addition to record cash balances, liabilities are also making a strong appearance, which hinders the allure of cash balances, since these are real obligations that require repayment — albeit at low interest rates.

In the fourth quarter, companies issued $89.4 billion in net debt, the third-highest total for a quarter over the past decade. As the chart above shows, cash as a percentage of debt was 39.4% at the end of 2014, down from 42.3% a year earlier and only slightly above its 10-year average of 36.1%.

Perhaps the most important lesson to learn from record cash balances is that if you can’t beat them, join them by becoming a shareholder. Distributions in the form of dividends and net repurchase of stock increased by 1.7% year-over-year to $175.4 billion in the fourth quarter.

That marks only the second time in the past nine quarters that year-over-year shareholder distributions failed to grow by double digits. The Consumer Discretionary sector reported the highest growth in distributions (23.9%), while the Information Technology sector paid out the largest aggregate sum ($52.2 billion).