How Much Did the Great Recession Cost You?

The Great Recession technically lasted from December 2007 to June 2009. During this time, economic conditions around the planet deteriorated rapidly, sharply declining in the third quarter of 2008 in the wake of the collapse of Lehman Brothers, once the fourth-largest investment bank in the world. The collapse was a major contributor to a contraction in U.S. gross domestic product that persisted until the first quarter of 2010.

To say that the late-2000s financial crisis was devastating would be an understatement, but there doesn’t seem to be a generally accepted set of adjectives to appropriately describe the situation, thus ‘devastating’ is a good stand-in. The non-partisan Congressional Budget Office estimated in February of 2013 that U.S. GDP growth would remain below its potential until at least 2017, indicating that not only did the recession destroy years worth of economic productivity, but that it had hamstringed growth for years to come.

The CBO wrote that, “The total loss of output, relative to the economy’s potential, between 2007 and 2017, will be equivalent to nearly half of the output that the United States produced last year.”

Quantifying the impact of the recession has been an enormously difficult task, but the challenge hasn’t stopped researchers at the Federal Reserve Bank of Dallas from trying. In an economic letter published at the beginning of September, three researchers — David Luttrell, Tyler Atkinson, and Harvey Rosenblum — suggested a possible dollar range for what society gave up during the crisis. They wrote the following.

“Our bottom-line estimate of the cost of the crisis, assuming output eventually returns to its precrisis trend path, is an output loss of $6 trillion to $14 trillion. This amounts to $50,000 to $120,000 for every U.S. household, or the equivalent of 40 to 90 percent of one year’s economic output. This seemingly wide range of estimates is due in part to the uncertainty of how long it might take to return to the precrisis growth trend. However, output may never return to trend — the path of future output may be permanently lower than before. If that’s the case, the crisis cost will exceed the $14 trillion high-end estimate of output loss.” 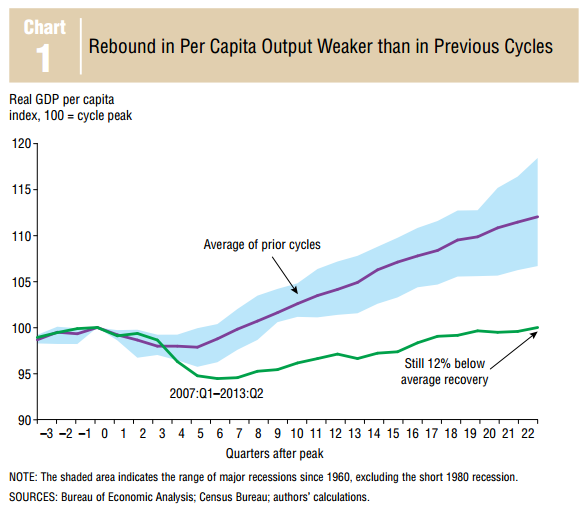 However, it’s clear to even a casual observer that attaching a dollar figure to the costs associated with the recession is a fairly arbitrary task. To put it bluntly, unemployment has been way too high for way too long and in particular, long-term unemployment has been a persistent problem. The U.S. Bureau of Labor Statistics defines long-term unemployment as labor force participants who have been out of work for 27 weeks or more. As of July, 37 percent of the 11.5 million people without work in the U.S. fell under the umbrella of long-term unemployed, a near-record rate that is down only slightly from post-crisis highs of more than 40 percent in 2012.

“Although subjective well-being can be hard to quantify, one study estimated a cost of as much as $14 trillion from loss of security in the workforce due to rising unemployment. This figure represents the lost income of the unemployed, the value of the loss of subjective well-being among the unemployed and the negative spillover effects on the employed, including the adverse effects of high unemployment on future income and job prospects.”