How Much Do We Spend on Beauty?

Between showering, fixing our hair, and potentially, putting on cosmetic products, it’s an ordeal. Women in particular, spend a pretty penny on these make-up products. Statista reports indicate that the cosmetics industry brings in over $55 billion annually, as of 2014.

Have you ever wondered just how much you (or your loved one or significant other) spend on being beautiful? You may be surprised to find out just how much of an expense beauty really is. 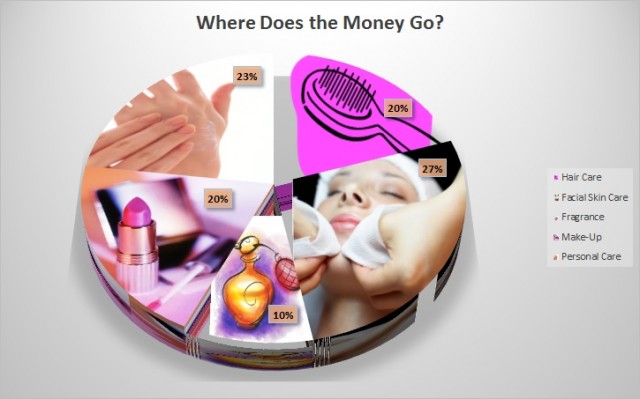 They’ve become part our daily routine and many of us feel as though we can’t live without them: Cosmetics and hair products are luxuries that place a serious dent in our wallets. Drugs stores, grocery stores, big box stores, and department stores alike stock their shelves with cosmetics products. If you go into a store like Walgreens, you have around a dozen different cosmetics brands to choose from, as the drugstore generally has around 25,000 beauty units in stock, according to the Beauty Company.

The Beauty Company also reports that between the ages of 16 and 65, a typical women shops for cosmetics at least five times each year, spending around $43 on a typical trip. This means, that over the course of a year, she’s spending around $215. This money could have bought a new iPhone (with a contract) or paid for a large chunk of a car insurance bill perhaps. Over a lifetime, a typical women spends $15,000 on makeup products. If that $215 went into a standard retirement plan (like a traditional IRA), instead of into makeup), it would yield around $100,000 at age 70. Go figure. 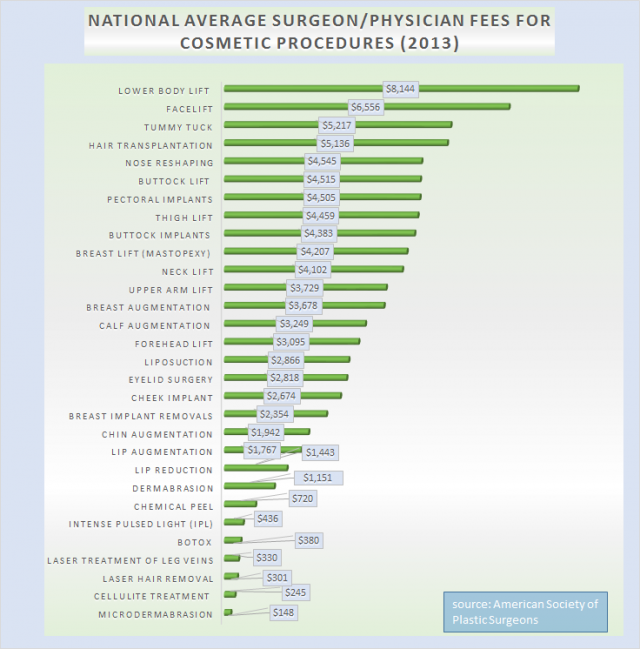 Sometimes people will “go the extra mile” in efforts to be beautiful. According to the American Society of Plastic Surgeons, 15.1 millions cosmetic procedures were performed in 2013, which is a 3% increase from the previous year. Of these procedures, most of them — 13.4 million — were minimally invasive procedures, like botox injections and chemical peels. But a large number of people — around 1.6 million — went under the knife to have invasive procedures, like breast augmentation surgeries, nose reshaping surgeries, and liposuction surgeries.

These procedures are expensive. As you can see in the chart above, a minimally invasive procedure, like microdermabrasion will cost you around $150 in physician or surgeon fees, but a procedure like a face lift or lower body lift can cost thousands of dollars. 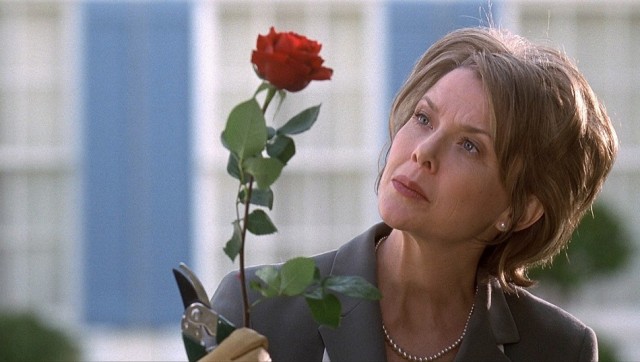 How things have changed

People have used different methods and products in efforts to be beautiful for generations and generations. A major difference between the beauty industry today, compared to the beauty industries of past generations, is the amount of regulation it faces. For instance, what ingredients are allowed and are not allowed in cosmetics, labeling, etc.

It was only around 70 short years ago that we finally outlawed X-ray hair removal, which shot dangerous levels of radiation directly at customers who wanted to have clear, hair-free skin.

“In some cultures, for example, women used arsenic, lead, mercury, and even leeches to give themselves the pale appearance deemed beautiful in the old days. Thankfully, we’ve come a long way from the days of using toxic and deadly mixtures to enhance our looks,” reports WebMD in its History of Makeup.

So, we’ve always been willing to spend big money (and even take big risks) all so that we could look good. Will that ever change?