How Much Is the Average Retirement Age Really Rising? 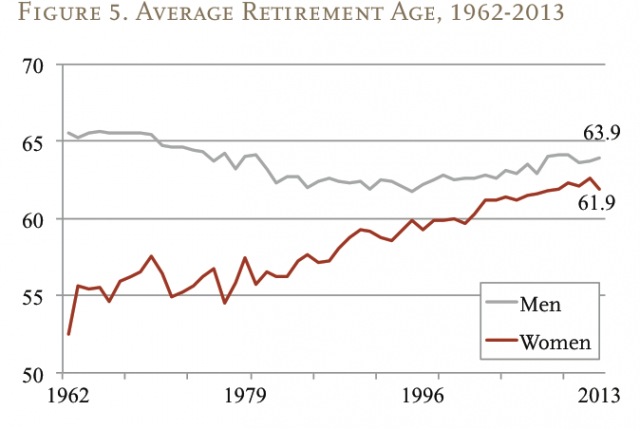 Age is just a number, until you realize that it can also indicate how well you are prepared for retirement. Once upon a time, workers retired with a company pension and the traditional gold watch. Those days have been gone for decades. Now, more older Americans are entering the workforce and delaying retirement. However, there might be a silver lining in this trend.

While vanishing pension plans and the recent financial crisis certainly deserve some of the blame for postponed retirements, numerous factors since the 1980s are also responsible, and not all of them are detrimental. In a new report, the Center for Retirement Research at Boston College (CCR) finds that the average retirement age is about 64 for men and about 62 for women. Positive factors lifting these averages include improved longevity, more education, less physically demanding jobs, and Social Security incentives for working longer. A change in social norms is also a contributing factor.

Today, the labor force participation rate for women is now close to that for men. Yet women can still inadvertently delay retirement for men. On average, wives are three years younger than their husbands, and couples often like to coordinate their retirements. If wives wait to retire until age 62 to qualify for Social Security, that pattern would push their husbands’ retirement age toward 65, which is near where the average retirement ages currently stand for men and women.

Retirement ages may be stabilizing due to marginal returns on the aforementioned positive factors. The Center reports: “Social Security’s delayed retirement credit is fully phased in; the shift from defined benefit to defined contribution plans is nearly complete in the private sector; delay due to the availability of Medicare has played its role; education is no longer increasing; improvements in health may have stabilized; and increases in longevity may not be salient.”