How Much Should We Pay Santa Claus?

Delivering gifts and toys to children all over, Santa Claus has a skill set that’s unparalleled. He’s a leader, a planner, an organizer, and a decision-maker all throughout the year. And on Christmas Eve, he flies a magic sleigh, brings joy to all of the boys and girls, and travels at lightning-fast speed.

With abilities that are unmatched by anyone, how much should Santa Claus get paid? (That is, if he were paid a salary.) Insure.com recently published the 2014 Santa Index, which attempts to answer that very question using data from the Bureau of Labor Statistics and the public’s opinion. The Santa Index is a valuable measure, as it provides us with insight into the job market’s conditions relative to last year. We can also use this index as a tool to help calculate our own earning power.

Overall, the insurance website broke down 15 of Santa’s responsibilities, comparing them to real-life occupations, determining how many hours per year Santa performs these duties, and placing a dollar amount on each one. For all of these tasks, Santa’s annual salary for 2014 would add up to $139,924 — this is about a $2,000 raise for Santa compared to last year’s index. 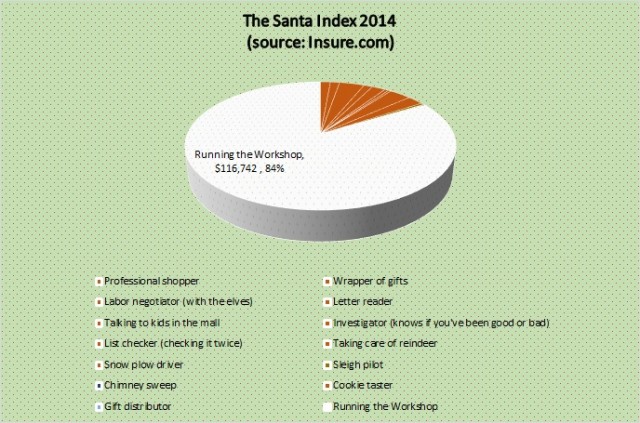 “Most of Santa’s pay comes from his duties as industrial engineer managing the North Pole toy factory. At eight hours a day 364 days a year, that comes to $116,742,” reports the Santa Index. For his labor negotiations with the elves, driving a snow plow, and caring for reindeer, Santa earns less than $5,000 annually for each of these tasks.

If Santa earned a salary of around $140,000, he would earn less than typical physicians, Congress members, and even CEOs. What do you think about that? Is Santa’s “salary” high enough?

During the holidays, we see Santa Clauses all over the place. They’re at the mall, they walk down the street, and they ride on parade floats. And while some of these Santas volunteer their services, some are paid. In Southern California, mall Santas can earn between $6,000 and $8,000 during the holiday season. Some Santas are paid these $8,000 wages for around 60 to 90 hours of performing — this can break down to wages that are in excess of $100 per hour. Thinking about putting on a red suit?