How Much Should You Really Spend on an Engagement Ring? 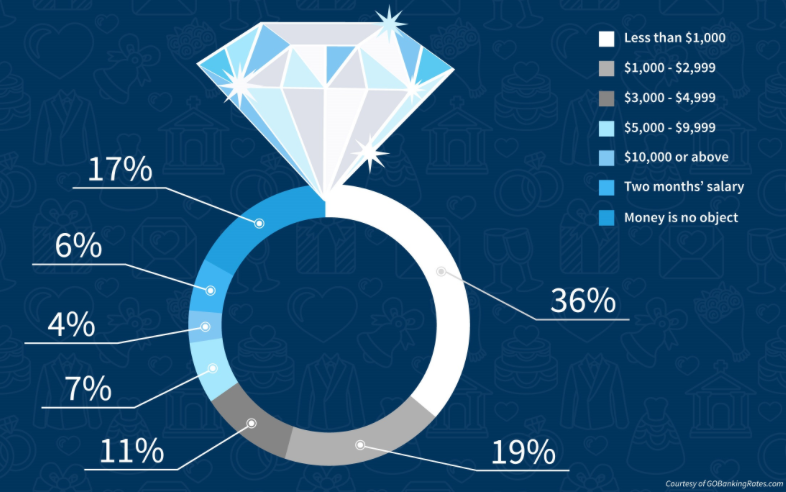 There’s no price on love, unless of course you’re paying for a wedding. Tying the knot is one of the most expensive celebrations in America. Lovebirds spend an average $31,213 just to begin their marriages, not including the honeymoon. Between the reception hall and various services, it’s not hard to rack up thousands of dollars in expenses for the big day. However, the spending spree begins with the much-debated engagement ring.

How much should you spend on an engagement ring? It’s a classic question many adults will face at some point in their lives. The standard advice says you should spend two months’ salary, but that appears to be outdated. A new survey from GoBankingRates proposed the “how much” question to 5,000 adults and offered seven possible dollar amounts. Thirty-six percent, the largest group by far, believe you should spend less than $1,000 on an engagement ring. Nineteen percent say you should spend $1,000 to $2,999, 11% say $3,000 to $4,999, and 17% say money is no object. Only 6% believe the two months’ salary rule still applies.

“The days of following ‘traditional advice’ is long over, especially for millennials struggling with student loan debt and averse to too much credit usage,” said LaTisha Styles, a millennial money expert and host of Young Finances TV, to GoBankingRates. “The Great Recession truly caused a shift in spending priorities.”

Student loan debt in America stands at about $1.2 trillion, with millennials accounting for the majority of that burden. It’s not surprising they aren’t excited to spend their life savings or go into debt for an engagement ring. PricewaterhouseCoopers finds a staggering 81% of millennials owe at least one long-term debt obligation, while 30% are overdrawing on their checking accounts, 20% are borrowing or withdrawing money from their retirement plans, and 34% are unsatisfied with their current financial situation.

Ultimately, you should only spend what you feel comfortable spending on an engagement ring, and any other wedding expense. A wedding is meant to be a celebration of love, not a hindrance to financial prosperity. Pressure is expected from vendors wishing to sell you a lavish experience, but if the pressure is coming from within your own relationship, you may have bigger problems. A recent study from Emory University finds that spending $20,000 or more on a wedding is associated with higher divorce rates than couples spending less.

If your partner is unwilling to compromise on any part of the wedding and “must have” the finest everything, you may want to take a good look at the person you are marrying. Are they financially responsible in other areas of life? If not, the royal wedding may be your final red flag.