How One Simple Decision Could Displace Millions of American Workers 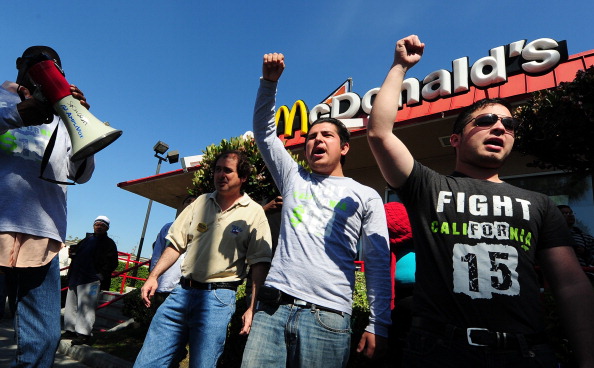 What do waste management, french fries, and the National Labor Relations Board (NLRB) all have in common? They’re all involved in a pivotal labor dispute that could have a cascading effect across the entire economy. Specifically, the case involves fast food workers, waste management employees, and what actually defines an employer as an employer.

The NLRB recently filed a series of complaints — 13 involving 78 charges, to be exact — against fast food giant McDonald’s, relating to the company’s low wages and the alleged company responses to protesting employees.

According to the NLRB, which issued the complaints, the charges against McDonald’s “include allegations of discriminatory discipline, reductions in hours, discharges, and other coercive conduct directed at employees in response to union and protected concerted activities, including threats, surveillance, interrogations, promises of benefit, and overbroad restrictions on communicating with union representatives or with other employees about unions and the employees’ terms and conditions of employment.”

Since McDonald’s has previously been judged to be a joint employer by the NLRB, it has thrown a wrench into the way that many businesses operate, including the hiring and retention of employees brought on board by staffing companies and other third-party entities.

A joint employer is a company that is — along with a staffing agency or other third-party company — found to actually employ workers. While many companies try to skirt legal obligations to full-time staff by using contractors or temporary workers, there has been a bit of crackdown lately.

Waste management company Browning-Ferris is at the center of the dispute, as the company’s union employees are arguing that it, too, is a joint employer, although a previous judgment ruled otherwise. That case is now set to go before the national labor board to either confirm or overturn the decision. That board’s judgment is what could change everything.

So how do we determine whether an employer is a joint employer? From the Browning-Ferris court documents, “the Board analyzes whether alleged joint employers share the ability to control or co-determine essential terms and conditions of employment.”

“Essential terms and conditions of employment are those involving such matters as hiring, firing, discipline, supervision, and direction of employees.  However, the putative joint employers’ control over these employment matters must be direct and immediate.”

Why is this important, and why does it have business groups, labor groups, and Americans of every stripe and color watching like hawks? It could ultimately redefine who or what constitutes “employers” and “employees.” This has been in the headlines quite a bit lately, including with other companies like FedEx.

But how could this affect millions of other workers around the country?

For contracted or temporary employees, a decision to side with laborers could have big consequences in that companies will either become much more engaged with them or they will create some distance between the company and worker in order to not fall under joint employer status. Businesses like the current setup, as it saves them considerable amounts of money on salaries and benefits, and they argue that siding with workers would ultimately cost jobs. Workers, on the other hand, see this as a part of a growing business trend to cut costs at the expense of employees.

That trend has also played a part in growing inequality, stagnant wages, and a slow economic recovery.

If the NLRB sides with workers, there will undoubtedly be some major changes across the economy, and it could ultimately lead to much different employer-employee relationships in the future. It’s just not clear if those redefined relationships would benefit workers or businesses.

The Associated Press reports that 42% of businesses plan to incorporate temporary or contract workers into their business strategy in the coming year, and that’s something that could change dramatically depending on the NLRB’s decision.

It’s a decision that will have a big effect on millions of American workers. The only question is: Which way will the NLRB lean?