How Scott Pruitt Spent $4.58 Million as Trump’s Man at EPA

Of all the Trump administration officials who burn through taxpayer money, none has been as reckless with public funds as EPA administrator Scott Pruitt. That’s probably because he still had his Cabinet position (and Trump’s unwavering support) despite 13 ethics investigations in 15 months.

Other famously corrupt officials, including the high-flying Tom Price, were  forced to resign in 2017. That hasn’t been the case for Pruitt, who limped into June 2018 still abusing privileges at White House dining rooms. (After the latest revelations, including an attempt to score a Chick-Fil-A franchise for his wife, two of Pruitt’s top aides resigned.)

To commemorate Pruitt’s 15 months of wild spending during his reign at the EPA, we added up all the dollar amounts confirmed through government records and other official accounts. Here’s what Pruitt did with $4.58 million of taxpayer funds at EPA in just over one year. 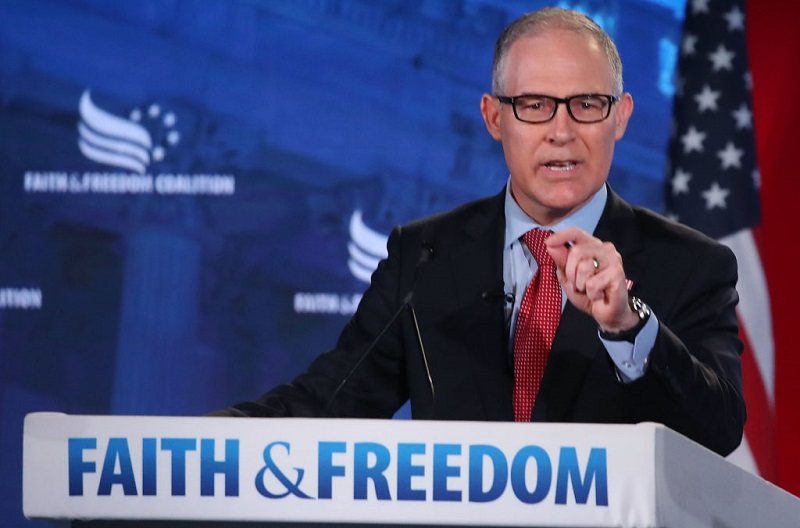 Pruitt was still making public appearances in June 2018. Here he is at a ‘Faith & Freedom Coalition’ Conference on June 8. | Mark Wilson/Getty Images

Did you ever feel like you need to sweep your home or office for listening devices? Scott Pruitt did a few months after landing at EPA, and it cost taxpayers $3,000.

Just after the AP reported that news, Pruitt and his staff had to abandon a $120,000 contract it was about to pay to a Republican public relations firm.

Next: Office supplies are expensive these days at EPA. 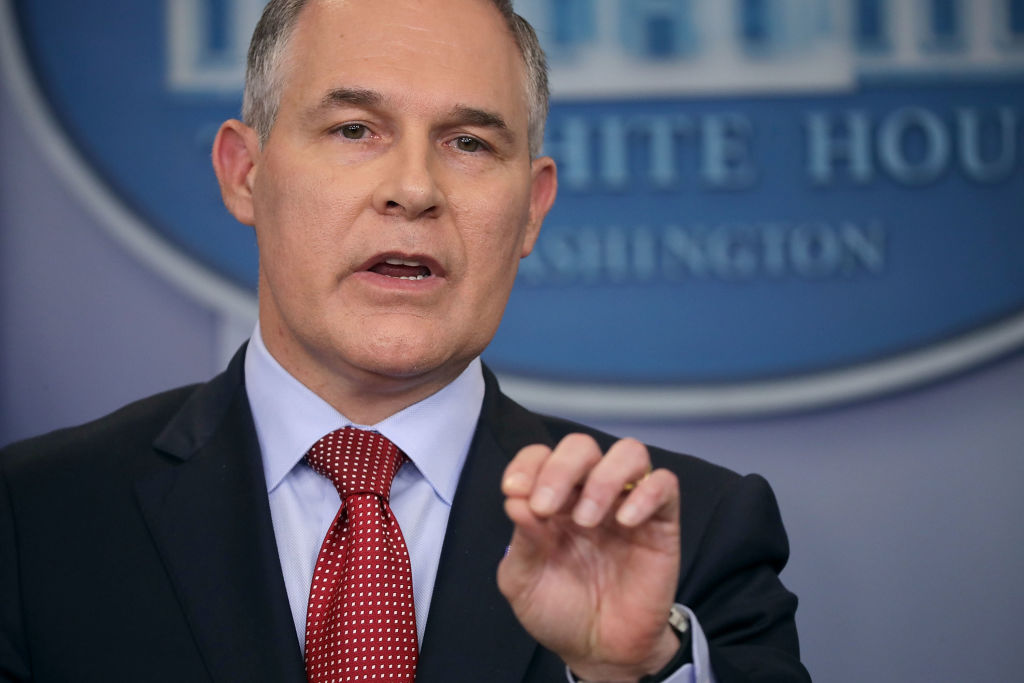 As millions of Americans remained out of work in 2018, the country’s EPA administrator was getting silver pens customized with his signature. The total cost came to $1,560 for 12 of these pens.

But what’s a custom pen without a personalized journal to write in? Pruitt answered that question by spending another $1,670 on journals. These costs accompanied requests for other expensive office goods, The New York Times reported.

Next: Once you sweep for bugs, are normal locks going to cut it? 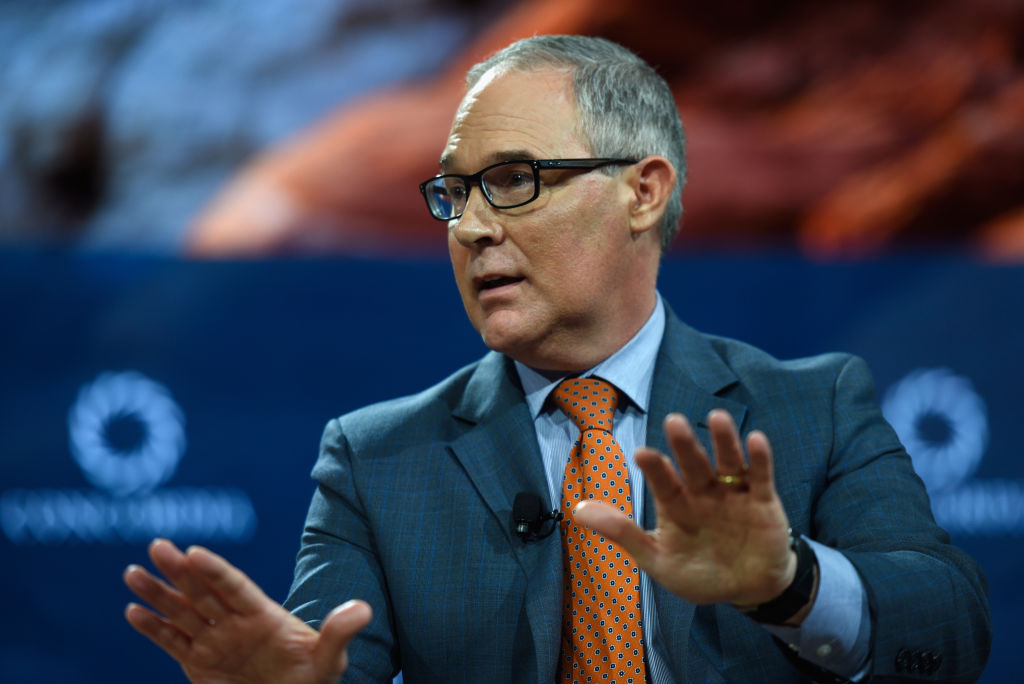 When the AP reported details of Pruitt’s unusual surveillance sweep, along with came reports of biometric locks that cost taxpayers $5,835. Yet the context of these expenses are almost important as the dollar amount.

Since purchases over $3,500 usually involve pubic disclosure, Pruitt’s staff split the costs into two. As with his secretive travel and meeting schedule (a first at the agency), Trump’s EPA administrator apparently felt he had something to hide with his daily spending.

Next: Pruitt almost doubled the amount allowed for decorating your office. 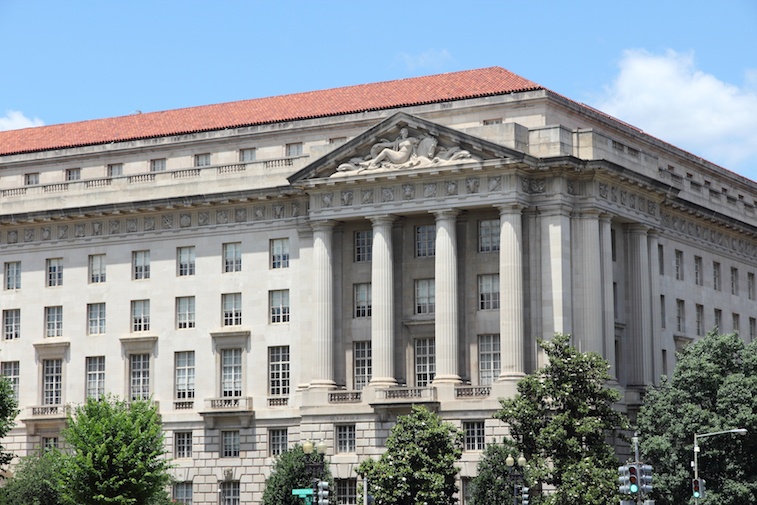 Let’s say, hypothetically, you were trying to cut back on government waste. Would you spend double the amount of money allowed for office decorations ($5,000)?

Scott Pruitt did, and had an EPA spokesman try to explain the costs away when The Hill learned about them. The expenses included a $3,000 desk for Pruitt and $2,500 to frame items, one of which was a picture of the EPA chief with Trump.

Next: While Pruitt asked for a $70,000 bulletproof desk, he had to settle for an expensive phone booth. 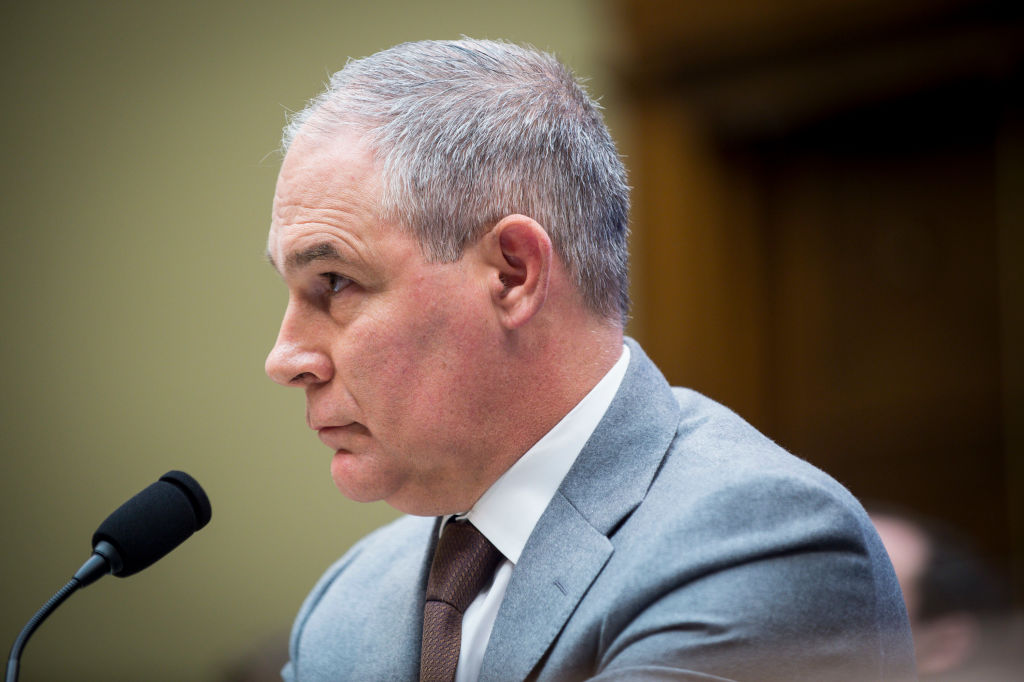 Despite having his office swept for listening devices, Pruitt still did not feel comfortable talking inside EPA offices. So he had a soundproof booth constructed for him at the cost of $43,000.

It turned out Pruitt also asked for a bulletproof desk (cost: $70,000), but you might say he got shot down on that request.

As for needing a secure place where Pruitt felt comfortable talking on a telephone, the strange part is EPA already had one. It was just another Pruitt embellishment.

Next: Pruitt got his staff big raises on the sly, and then lied about it.

Of all the things that would get someone fired at a job, lying to your boss about pay raises is the one that would finish off any employee. But Pruitt did that to the tune of $84,000 and still has his job.

Both were friends of Pruitt’s from Oklahoma, and both raise requests were previously denied by the White House. Pruitt made sure they got the money anyway, then lied about it during an awkward Fox News interview.

Next: It’s hard to explain how trips to Morocco with a Comcast lobbyist help the environment (or America) in any way. 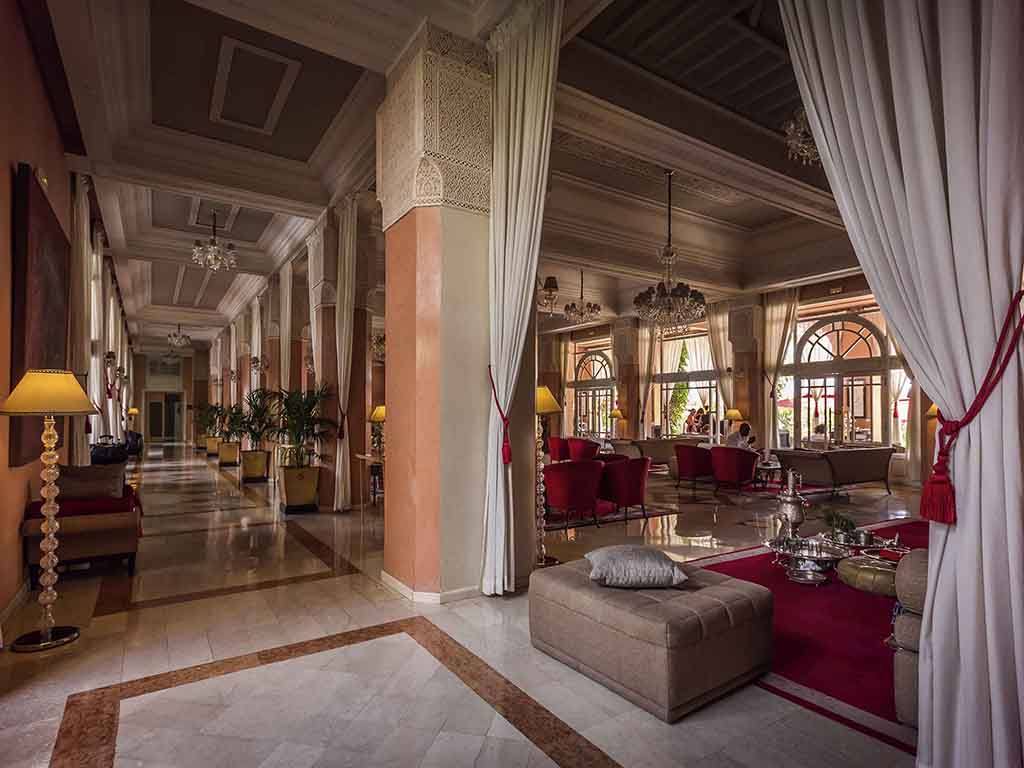 Nothing says protecting America’s air and waters like flying to Morocco with a Comcast lobbyist, am I right? Apparently, that’s what Pruitt thinks, and the December 2017 trip cost taxpayers at least $100,000.

So what does the EPA have to do with any of this? Nothing, except Pruitt wanted to take an exotic vacation, and that’s how he got the money.

Next: Pruitt’s taste for private jets ran taxpayers over six figures in 1 year.

The problem was, Pruitt was running late for a flight to Rome out of New York (cost to taxpayers: $7,003). So he got a military jet to take him there.

It wasn’t the first time Pruitt’s used U.S. Armed Forces aircraft to travel. Just from the flights we’ve learned about, he spent $104,000 on such trips in one year on the job.

Next: We haven’t added up the first-class flights yet. 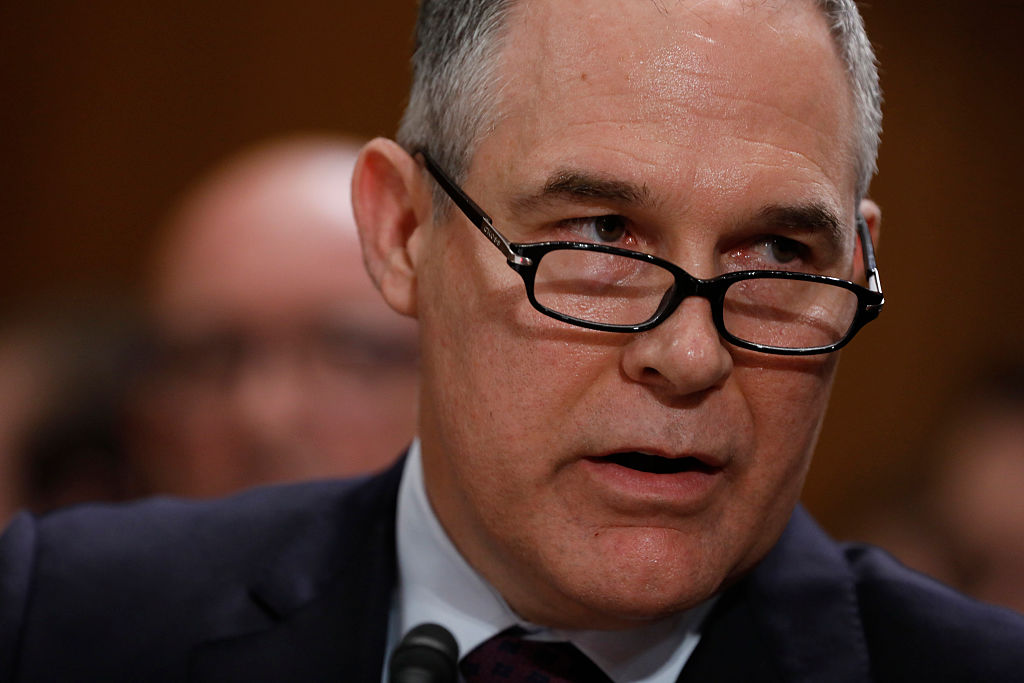 Early on in his time at EPA, Pruitt expressed a desire to stay away from fellow Americans while traveling (yet another thing that separated him from former EPA heads). Instead, Pruitt expected first-class travel at all times, and it cost taxpayers at least $130,000 since he arrived at EPA.

“We believe that the continued use of coach seats for the Administrator would endanger his life,” Pruitt’s chief of security said. It is perhaps the clearest expression of Pruitt’s paranoia on official record.

If he said flying coach would “endanger his lifestyle,” that would have been much more believable. Yet when Pruitt flew home to Oklahoma and had to pay, the EPA chief always flew coach.

Next: The first 24-hour security detail in the history of the EPA has cost taxpayers over $4 million since Trump took office 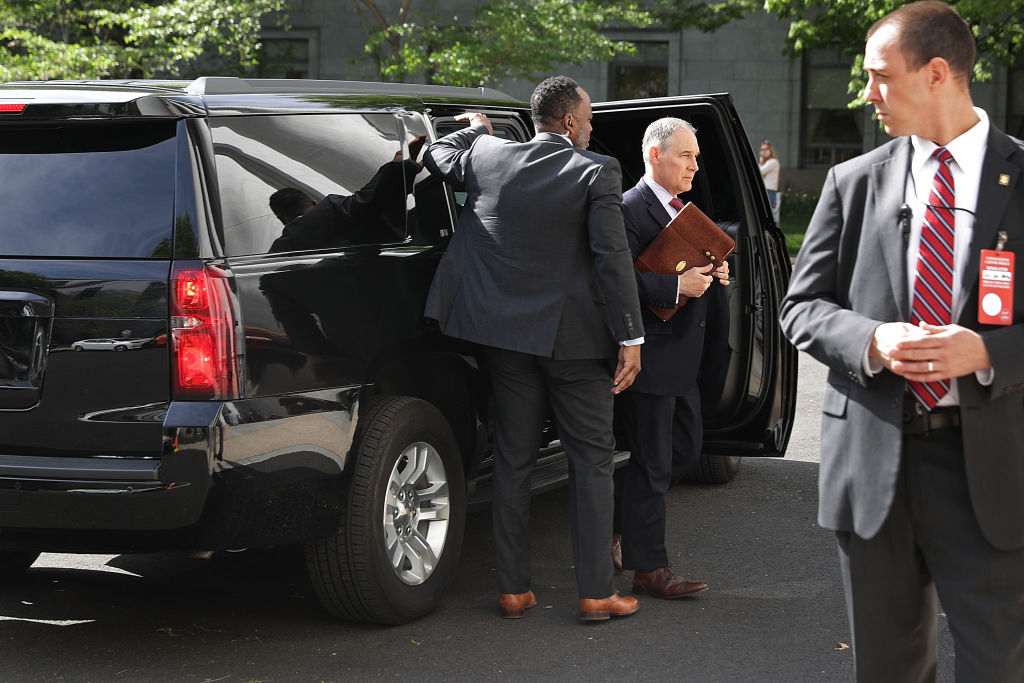 When we learned that Pruitt had his security team run sirens so he can have dinner on time, it was almost a comical example of a bureaucrat on an out-of-control spending spree.

However, learning that Pruitt’s 24-hour, 18-man security detail cost $3.5 million per year falls somewhere between pathetic and criminal. The expenses are close to double what any previous EPA head spent on protection.

In fact, the first calls for a criminal corruption probe of Pruitt followed news of the Chick-Fil-A scandal in June. But as far as taxpayer funds are concerned, those millions are long gone.