How Student Loans Could Actually Hurt Your Retirement

Americans are becoming more concerned with their financial futures as the looming retirement disaster draws near. Between rising health care and housing costs and the strain on the Social Security program, aging workers have a lot of challenges on the horizon. And now we can add another expense to the list of retirement worries: education debt. According to LIMRA Secure Retirement Institute’s analysis of government data, both retirees and pre-retirees are now facing unprecedented levels of student loan debt.

The 2015 report found that among pre-retirees, or those age 55 to 64, education loans made up only 4% of non-mortgage installment debt in 1989. That figure skyrocketed to 30% by 2013. For retirees age 65 to 74, student loans went from less than 1% to roughly 15% over the same time frame. LIMRA published the following charts to illustrate how the debt breakdown changed over this 24-year period. 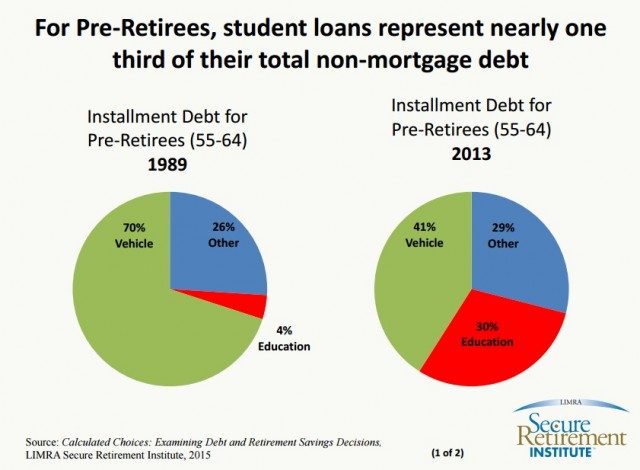 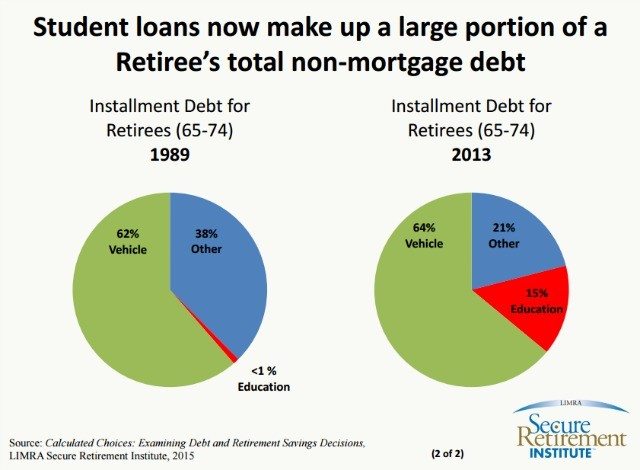 The amount of debt held by each group also rose significantly between 1989 and 2013. The average student loan debt among pre-retirees increased from $600 to almost $8,000, and for retirees, the average education loan debt grew from $400 to more than $2,300.

More Americans are assisting their children and grandchildren with student loans than ever before, but for many families, it comes with financial ramifications in retirement. Mike Ericson of LIMRA said, “That’s a type of debt that can hinder people being able to retire on time.” LIMRA data has also shown that having enough money for a comfortable retirement is the leading financial concern in America, but it seems that goal is getting harder and harder to reach.

Retirees have also brought more auto and mortgage loans with them into retirement in recent decades, making them even more susceptible to financial hardship in old age. With so much money going to paying back debts, there isn’t much left to cover unexpected costs, such as surprise medical bills, or even typical monthly expenses. “When someone takes on additional installment debt in their late working years or early retirement, they have less money available for retirement savings and monthly expenses,” explained Ericson, “which makes it harder to save enough to eventually replace their income.”

It’s not just retirees and pre-retirees who should have concerns. According to the LIMRA study, adults under age 35 average three times the amount of student loan debt they faced in 1989 due to rising tuition costs. American workers and students of all ages now need to take retirement into consideration when it comes to education loans. With certain career paths, the investment is likely to pay off more quickly, but some students are opting for community college or vocational programs because they don’t see a typical 4-year education at a university paying off.

It’s understandable that baby boomers want to help their kids with college by taking out parent loans. But with these debts carrying over into retirement at alarming rates, one would think some parents might change their outlook. Even young parents are increasingly left with an impossible dilemma, choosing between saving for retirement or a child’s education. Not surprisingly, the needs of the child are commonly the first priority. According to a report from T. Rowe Price, 49% of parents are willing to delay retirement to pay for a child’s higher education, and 74% feel guilty that they can’t give more financial assistance.

Each individual’s financial situation is unique, but it never hurts to plan ahead, especially when it comes to sizable loans. With a weak economy and a challenging job market persisting, both parents and students are facing huge financial challenges, leading many to advise Americans to start putting money aside for retirement earlier than ever.