How Taxing the Wealthy Could Save Social Security

It’s no secret that Social Security is in serious trouble, and it seems like every proposal to fix it comes under fire. One such contentious proposal is to eliminate or raise the taxable maximum. It’s been called the taxable earnings cap, the tax wage base, the maximum taxable wage base, and the tax max, but whatever term you use, the idea is that there is a limit to the amount of earnings subject to Social Security tax. For 2015, the cap has been set at $118,500. Every year the wage base increases slightly to account for inflation and changes to cost of living.

The taxable maximum also applies when earnings are used in a benefit computation. In other words, there is a limit to how much the wealthy have to pay in Social Security taxes, but the limit also applies to what they get back.

Nevertheless, critics of the earnings cap claim it’s unfair, as low-income workers end up being taxed at a higher percentage of their overall earnings than those whose earnings exceed the cap. Some claim reforming this aspect of Social Security will also help alleviate the coming crisis. At the current benefit and tax rates, the program is not sustainable. According to the Social Security Administration (SSA), once trust fund reserves are exhausted in 2033, only 75% of scheduled benefits will be covered.

A 2011 SSA policy brief explained the typical rationale behind proposals to reform the tax wage base:

“Some policymakers propose increasing the tax max beyond wage-indexed levels to help restore financial balance and to reflect growing earnings inequality, as workers earning more than the tax max have experienced higher earnings growth rates than other workers in recent decades.”

Although the proportion of workers with earnings above the taxable maximum has stayed relatively constant at around 6%, earnings growth among those above-max earners has been significant compared to the rest of the working population. The most substantial growth occurred in the top 1%, and in particular, the top 0.1% of earners. 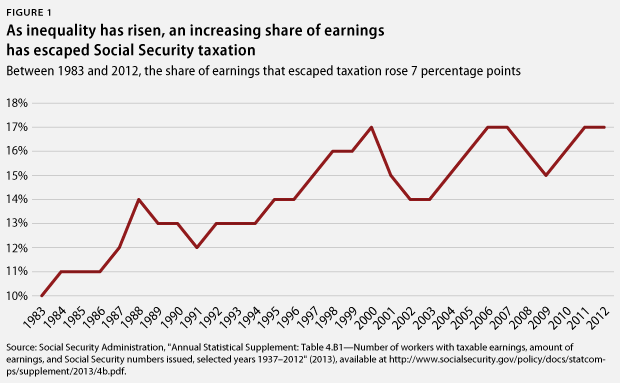 As income inequality has risen dramatically, an increasing share of earnings has escaped Social Security taxation, argues a 2015 report by the Center for American Progress. Looking back, the study explains, “if policymakers had acted to freeze the cap on taxable earnings at 90 percent of covered wages after 1983, the trust funds would be $1.1 trillion larger today, and the shortfall would be smaller by 10.1 percent.”

The wealth gap certainly can’t be ignored in policy discussions addressing the Social Security crisis. But what is the best way to proceed in reforming Social Security today? Seemingly every proposal has faced a certain amount of heat from critics and politicians.

To prevent Social Security from running out, we can either raise taxes or cut benefits. It is often presented as an either-or situation — as in we either raise the age requirement or increase taxes. The tax hike option could go one of two ways: raising the current 6.2% tax rate (12.4% total between employers and employees) or reforming the tax max.

According to a 2010 Congressional Research Service Report, it’s estimated that removing the base entirely and taxing all earnings would generate nearly $100 billion in revenue to the Social Security program, reducing the government’s outstanding debt and shrinking Social Security’s long-range deficit by 95%.

The major problem with removing the cap, many argue, is while it would bring in more money initially, in the long run it would add costs to Social Security by providing higher benefits to those who need them the least. Without severing the link between taxable earnings and benefits, it could end up exacerbating the crisis further.

That’s why others are suggesting, instead, to reduce benefits for high earners. Some propose compromises such as taxing earnings that fall beyond the cap, but at a lower rate, or broadening the sources of income that can be taxed as earnings. Another popular argument is for raising the tax max to cover 90% of total earnings, though this wouldn’t be enough to guarantee full benefits over the next 75 years.

Social Security tax reform is bound to be controversial. The important thing, beyond striving for further research, is not to lose sight of the program’s purpose. According to a 2014 report from the Heritage Foundation, the creators of the Social Security program did not advocate for a tax cap in the first place. They recommended those earning at least three times the national average should neither pay Social Security taxes nor receive Social Security benefits, a suggestion possibly rooted in Social Security’s original intent to prevent poverty in old age.

Of course, the American economy is different now and should be treated as such. Regardless of how Social Security policy does or doesn’t change in the coming years, there are other reforms that can help the situation as well. The Center for American Progress report drives this point home in its closing recommendations, advocating for policies that boost wages, combat rising inequality, and ideally, find a way to modernize the Social Security program’s revenue structure to better reflect today’s economy.