How Will Janet Yellen Handle the Senate Banking Committee? 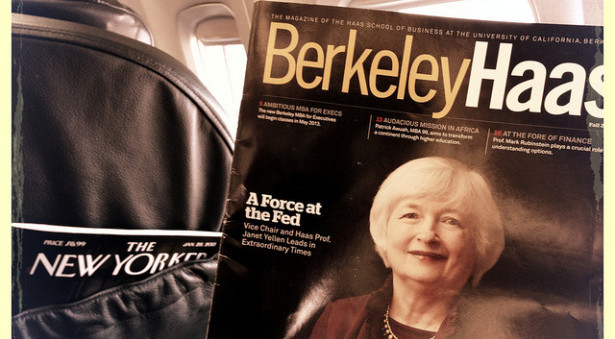 At 10:00 a.m. on Thursday, Janet Yellen will sit before the Senate Banking Committee and defend her nomination to Chair of the U.S. Federal Reserve. Yellen, who has served as Vice Chair since 2010, is expected to face tough questioning from the panel’s 10 Republican members, some of whom have been openly critical of both current Fed policy and Yellen’s position on monetary policy.

At a glance, monetary policymakers can be split into two groups: hawks and doves. A hawk is generally more concerned with inflation (that is, keeping it low), where as a dove is generally more concerned with the level of unemployment. Fed policymakers are ostensibly bound by the dual mandate, which establishes full employment and price stability as the goals of monetary policy, but invariably policy decisions lead to trade offs.

Right now, the trade off is this: monetary easing (or, quantitative easing) is designed to reduce interest rates, stimulate business activity, and lower unemployment. This is all well and good, but no good deed goes unpunished. The other side of the coin is that monetary easing increases inflation expectations — and high inflation, like high unemployment, is economically destructive.

While it’s not necessarily true that the Fed can only lower one at the expense of increasing the other, certain trade offs are necessary. The Fed is currently engaged in a historic, ongoing program of monetary easing that has helped stimulate business activity and reduce unemployment without increasing inflation. In fact, inflation — as measured by the price index for personal consumption expenditures — is, if anything, low, climbing just 1.2 percent on the year in September. The Fed has set an inflation target of 2.0 percent and a 2.5 percent inflation threshold. If inflation expectations breach the threshold, the Fed has indicated that it would reduce stimulus.

Relatively low inflation — coupled with underwhelming economic growth — has generally been interpreted as a “green light” for policymakers to continue asset purchases in an attempt to drive down unemployment. This interpretation has troubled some market watchers who are concerned that inflation will finally catch up with monetary easing in 2014, and Yellen — described by most as a dove — will tolerate the price pressure in an increasingly ineffective attempt to reduce unemployment.

This expectation — that Yellen is a dove and will prioritize unemployment — definitely has some real roots. Perhaps most infamously, a comment that Yellen made in 1995, when she was a member of the Fed Board of Governors, has been cited as evidence. During a policy discussion meeting held by then-Chair Alan Greenspan, Yellen argued against inflation targeting as a policy tool. She said, “Fortunately, the goals of price stability and output stability are often in harmony, but when the goals conflict and it comes to calling for tough trade-offs, to me, a wise and humane policy is occasionally to let inflation rise even when inflation is running above target. When I look at the behavior of the FOMC and other central banks, I simply can’t find a lot of cases in which monetary policy has ever been driven by an exclusive focus on inflation performance.”

When Fed Chair Ben Bernanke testified before Congress in May, Chair of the Joint Economic Committee Congressman Kevin Brady (R-Tex.) asked, “My worry is that the Fed doesn’t have the prescription for what ails our economy. A year ago, the Fed said that it wouldn’t set an employment target rate because it’s generally affected by non-monetary factors. But you’re unwinding the QE based on the employment areas that you have the least control of. What do we make of that?”

Bernanke’s response pretty much confirmed Brady’s concern. “What we are trying to address here is the short-run cyclical gap,” he said. “We are seeing the economy operating at a level below what it is capable of operating at, and many people out of work who normally would have work, and monetary policy can help to put people back to work in the short run.” Yellen is expected to face questioning along these lines on Thursday.