The Bureau of Labor Statistics’s seasonally adjusted Consumer Price Index for All Urban Consumers, or CPI-U, increased by 0.1 percent on the month in August. This is consistent with economist expectations, but the data also mark the continuation of a troubling trend. Inflation has been slowing down over the past few months, which is somewhat concerning given the U.S. Federal Reserve’s aggressive stimulus program.

Quantitative easing — the name given to the Fed’s ongoing purchases of agency mortgage-backed securities and longer-term Treasury securities — has four primary effects on the economy: higher inflation expectations, currency depreciation, higher equity valuations, and lower real interest rates. We have seen most of these manifest in the U.S. to some degree, but inflation data released over the past few months have come in surprisingly soft.

Headline CPI inflation was just 0.2 percent in July, which itself was down from 0.5 percent in June. Year-over-year CPI inflation is 1.5 percent, not low enough to write home about, but worth keeping an eye on. Unusually soft inflation during a period of aggressive monetary stimulus could suggest — as Fed Chairman Ben Bernanke warned about in May — that there are deflationary pressures in play.

August’s core consumer price index, which strips out typically volatile food and energy price movements, increased just 0.1 percent on the month, below expectations for an increase of 0.2 percent but its fourth consecutive month of upwards movement. The core CPI is up 1.8 percent on the year.

With the Federal Open Market Committee sitting down for the first day of a two-day policy meeting on Tuesday, the atmosphere is thick with taper talk. Most economists are expecting Fed policymakers to announce some sort of reduction in the asset purchases program, despite low inflation suggesting that there is room to continue. 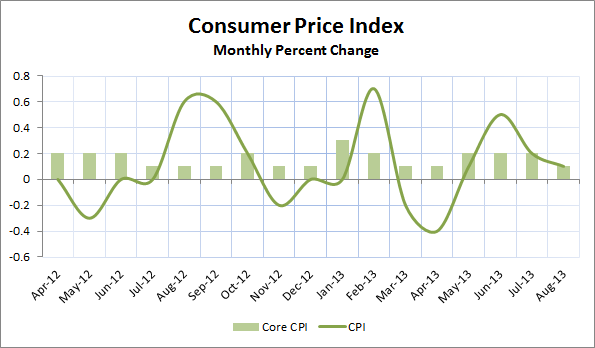 The PPI interprets price changes from the perspective of the seller and can be used as a leading indicator of inflation because it measures input price pressure. The producer price index report is broken down into three broad sections: crude goods, intermediate goods, and finished goods.

Price increases at any stage of production can sometimes be passed down the line and could ultimately reach the consumer, as reflected in consumer price index and the index for personal consumption expenditures. 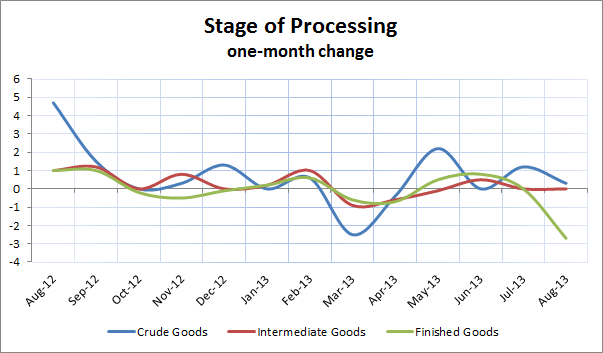 Source: Data from the Bureau of Labor Statistics