How Would a Syrian Strike Affect U.S. Gas Prices?

The U.S. Energy Information Administration reported on Wednesday that commercial crude oil inventories increased by 3 million barrels during the week ended August 23 to 362 million, which is near the upper limit of the average range for this time of year. Total crude oil imports averaged about 8.4 million per day for the week, up by about 423,000 bpd compared to the previous week and above the four-week moving average of 8 million bpd, which is 723,000 bpd lower than the average for the same time last year.

All told, the data from the long-run is consistent with the idea that the United States is heading toward energy independence. Imports rose on the week, but are down on the year. Net energy imports for the January-May period were 4.364 quadrillion btu, down from 6.546 quadrillion in 2012 and 8.03 in 2011. Total U.S. production in May was 6.888 quadrillion btu, which compares against total consumption of 7.604 quadrillion btu.

This news sits against two significant backdrops. One is the surge in domestic energy production made possible by advances in drilling technology — the other is the increasingly tense geopolitical situation in Syria. The two events have played against each other, one pushing prices lower and the other pushing prices higher, and both affecting everything from global equity markets to the price of gas at the pump.

On August 21, before it seemed obvious that some sort of U.S. led military action against Syria was imminent, the EIA reported that unexpected disruptions to global crude oil and liquid fuels production edged up to 2.7 million barrels per day in July, the highest level since at least January 2009. The report explained the following.

“Disruptions to production in Iraq and Libya have had a significant effect over the summer, reducing crude supplies, particularly into the Mediterranean market, an important market for Brent-priced crude oils. In Iraq, persistent attacks on the pipeline from Kirkuk to Ceyhan in Turkey helped push total Iraqi production disruptions to about 290,000 bbl/d in July, up 60,000 bbl/d from June. 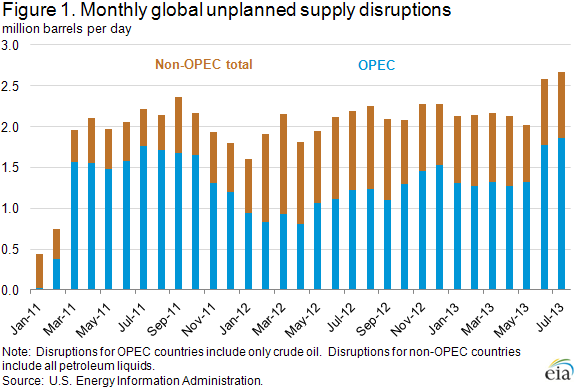 With this in mind, it now seems inevitable that the security environment in Syria — and possibly Iraq — will deteriorate further. U.S. Secretary of State John Kerry has accused the Syrian government of using chemical weapons against opposition forces, in the process committing “indiscriminate slaughter of civilians.”

“By any standard, it is inexcusable,” he said at the State Department in Washington on Monday. “It is undeniable.” The situation has satisfied the conditions for U.S. military intervention in the region, and reports from nearly every corner of the world indicate that some sort of action could be just a few days away.

Syria — which is bordered by Iraq on the east, Turkey on the north, and touches Israel on the southwest — has been engaged in a brutal civil war for more than two years. The country claims traditional allies such as Iran, China, Venezuela, and Russia, and has been led by President Bashar al-Assad since 2000.

The Syrian uprising has taken center stage as one of the most disruptive and violent ongoing conflicts. In June, the United Nations estimated that the conflict has claimed 100,000 victims. Now, with the threat of outside military action looming, the footprint of the fighting is expected to expand. The Syrian government has promised that its defense against foreign military action would “surprise” the world — something many fear means the use of more chemical weapons.

Foreign military intervention likely spearheaded by a long-reluctant U.S. is expected to spill over Syrian borders, both politically and physically. Syria’s proximity to Iraq and Iran — which together account for nearly 20 percent of the output for the Organization of Petroleum Exporting Countries — means that the action could agitate the already volatile political environment.

The markets, in their own way, have already begun to anticipate some sort of fallout. The price of oil has increased dramatically recently, with West Texas Intermediate climbing about 0.8 percent just after noon on August 28 to a two-year high of $109.84 per barrel.

It’s important — or, at least, interesting — to point out that Syria itself doesn’t actually produce that much oil. Production in the country peaked just under 600,000 bpd in the late 1990s but declined steadily through 2010. In 2011, when protests and then war began in earnest, production plummeted. The EIA reports that the nation produced just 157,158 bpd in 2012.

Prices are ostensibly reacting to concerns that any action in Syria could complicate production and transportation in other countries in the region. Iranian Foreign Ministry spokesman Abbas Araghchi recently told reporters in Tehran that foreign military involvement in Syria would “engulf the whole region.”

So how could these oil market disruptions affect Americans at home? Perhaps the most obvious and immediate effect of rising oil prices is rising gas prices. The two move more or less in lock step with one another. As the EIA put it, “All else equal, changes in gasoline prices follow changes in crude prices.” 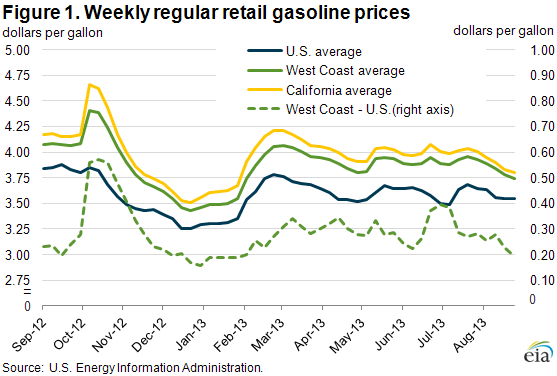 If petroleum prices continue to increase, gas prices — which are down on the year — could come back up. For the week ended August 26, the average retail price of a gallon of gasoline in the U.S. was $3.552. This is down 22 cents from the year-ago period, though up a fraction from the previous week. This is down from the summer-to-date peak of $3.68, which was hit on July 22.

As far as forecasts are concerned, the EIA projected earlier in August that oil and gas prices would decline throughout 2014 — with regular gasoline approaching $3.00 per gallon by the end of the year. Thanks to increased production in the U.S. and other non-OPEC countries, prices could very well still continue to decline after some of the dust has settled over Syria.