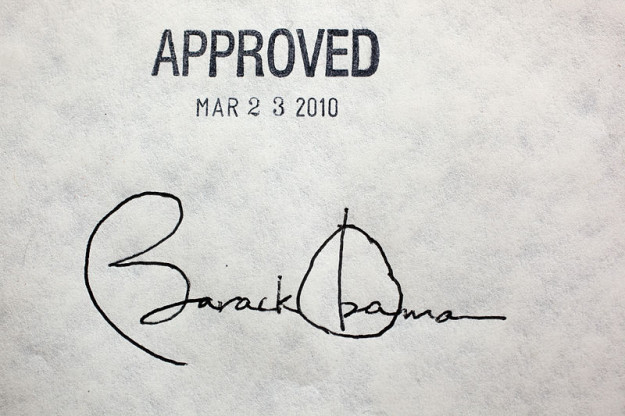 Health insurer Humana (NYSE:HUM) – which offers insurance policies on the Affordable Care Act-created marketplaces of 14 states — reported fourth-quarter and full-year financial results on Wednesday. The company lost $30 million, or 19 cents per share, in the final three months of the year, a drop from the $192 million, or $1.19 per share, it earned a year ago.

Largely responsible for that turn to negativity was a $243 million expense Humana incurred for setting aside funds to support a group of long-term care policies that it no longer sells. But that charge was no surprise: No new policies in that block have been sold since 2005, but current policyholder costs rose thanks to greater longevity and increased use of in-home health care, forcing Humana to boost reserves.

What the insurer did not anticipate were the changes to Obamacare made by the Department of Health and Human Services at the end of last year and the glitch-riddled rollout of the insurance exchanges created by the health care reform law.

CEO Bruce Broussard told analysts on a conference call following the release of the health insurer’s fourth-quarter results that problems with the implementation of the Affordable Care Act that caused the administration of President Barack Obama to backpedal and apologize are resulting in different exchange enrollment figures from what the insurer had anticipated and therefore impacted earnings.

However, the lower-than-expected purchases of Obamacare-compliant exchange offerings did not significantly shift the company’s top- or bottom-line earnings numbers in any meaningful way because the period was relatively unaffected by the Affordable Care Act. Policies purchased through the exchanges did go into effect until January 1. Still, costs did increase in Humana’s retail segment because of higher spending on the exchanges and Medicaid contracts, although those increases were not enough to significantly affect results.

Those startup costs will continue through 2014, with Humana expecting to spend 50 cents to 90 cents per share on investment and startup expenses for new state-based Medicaid contracts and the state-based insurance exchanges.

More importantly, how Humana describes the impact of the Affordable Care Act exchanges and the Obamacare-compliant policies has changed. In earlier 2014 forecasts, the company said the changes to the health care system would not have a big impact on profits this year, but now the insurer expects the effect to be “more adverse than previously expected.”

Alongside earnings, Humana reaffirmed 2014 earnings guidance given in January; the company expects to earn between $7.25 to $7.75 per share, which compares with $7.73 per share earned in 2013. It must be noted that Humana currently generates most of its revenue from the sale of private Medicare plans.

What matters to health care companies and their investors is how successfully the Affordable Care Act extends coverage to the 48 million uninsured Americans, meaning how many people sign up for Obamacare-compliant policies. For much of last year, investors showed signs of excitement at the coming reform of the health care system, because it meant that millions of new customers would flow into the market, injecting billions of dollars per year into the industry.

Exchanges are the key provision of Obamacare, designed to allow consumers comparison-shop for health insurance policies in online marketplaces where their collective bargaining power will theoretically foster competition and drive down prices. That insurance market setup — plus the provision for premium subsidies given to those Americans earning between 138 percent and 400 percent of the federal poverty level, along with the expansion of Medicaid — was meant to make health care accessible for a much broader swath of the American public.

Humana reported that through the end of December, it received 202,000 applications for exchange-based insurance policies, which is far below the 400,000 reported by competitor WellPoint (NYSE:WLP). The company’s predictions for total 2014 individual memberships, which includes plans sold outside the exchanges, indicate that enrollment numbers may not be as strong as hoped this year. The insurer predicts membership to come in between zero growth or a 100,000-person increase.