There are some things in the world only the insanely wealthy can afford. Exhibit A? Luxury yachts. With some careful saving and savvy investing, you might be able to get your hands on the most expensive cars out there. There’s a chance you have enough to take up a pricey hobby that allows you to rub shoulders with the rich and famous. But owning a yacht is reserved for the truly wealthy.

Once you get past the sticker shock, owning a huge boat costs millions of dollars each year. A proposed royal yacht would cost an estimated £10 million to operate every year. The rich and famous live a little differently than us, and these unbelievably expensive yachts are proof. Just how expensive are these yachts? Let’s just say the celebrities who bought these expensive houses would hardly be able to afford the anchor. 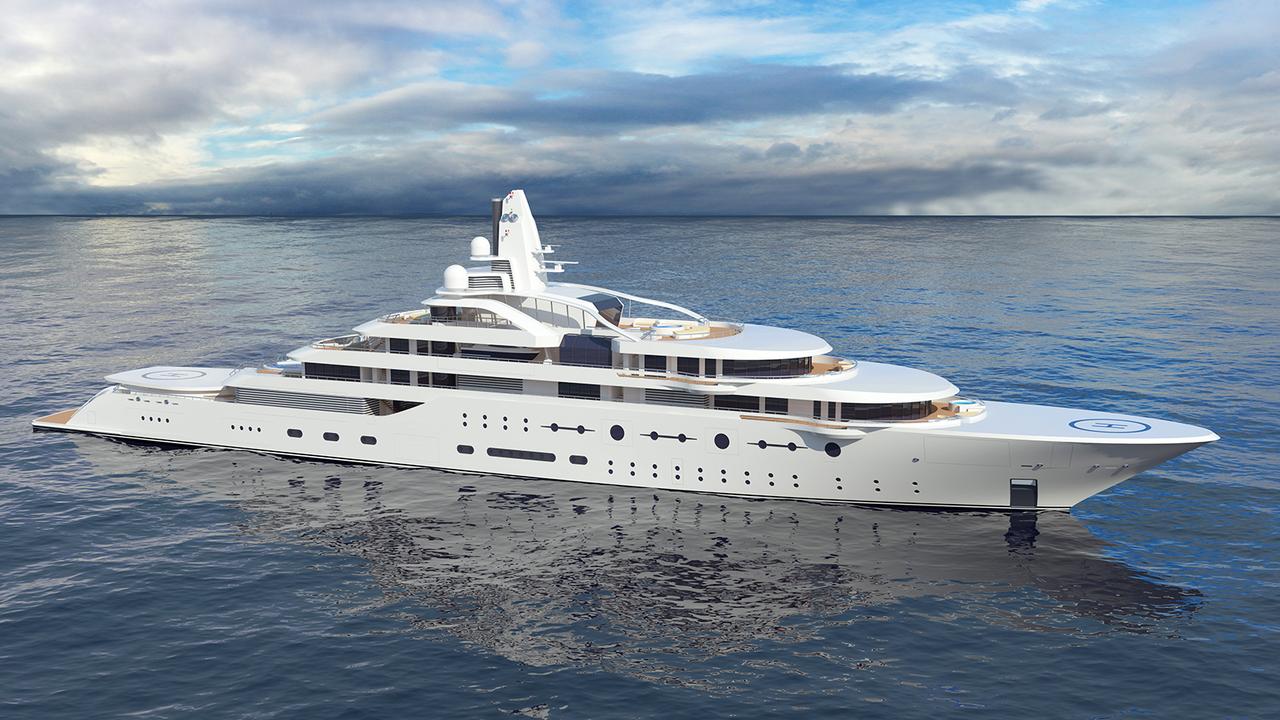 It has not one, but two helicopter pads. | Agent4Stars

The old axiom goes, ‘If you have to ask how much it is, you probably can’t afford it.’ That’s likely the case with this boat, which puts other yachts to shame. We start here because we can only speculate on the price tag, but it’s almost guaranteed that Atom is one of the most expensive yachts out there. At 135 meters long, it has room for two limousines or two helicopters, whichever mode of transportation you prefer. The luxury doesn’t end there as it also has two elevators and an infinity pool.

Next: No oceans are off limits in this boat. 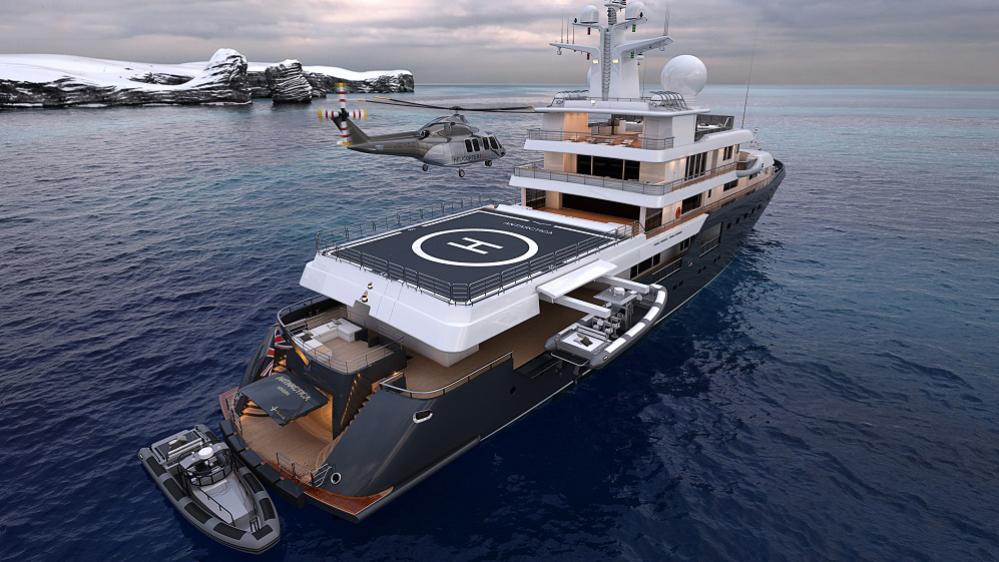 Keep out of the Antarctic chill with your own hot tub. | Fraser

We start our list of yachts with verified price tags with a boat that costs a modest $100 million. True to its name, Antarctica is suited for setting a course through icy Arctic waters. But don’t worry: The boat comes with a hot tub plus a personal cinema for curling up and watching your favorite flick. It’s listed at €85 million. At $1.19 per €1, that converts to $100.8 million

Next: Your life of luxury continues at sea on this yacht. 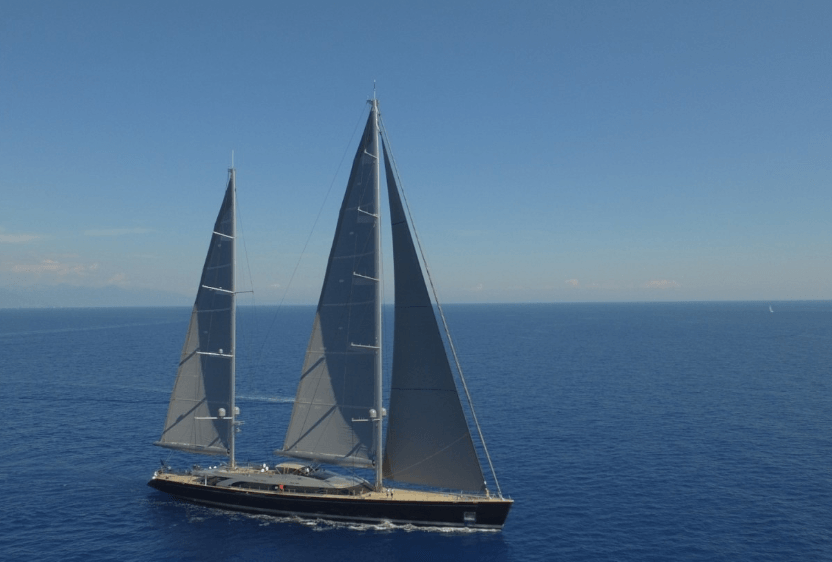 For the sailor who wants a little luxe in their life. | Edmiston

If you can afford a yacht like this, you’re already living a life of luxury. Sybaris keeps up that lifestyle once you set sail with wood paneling throughout, plenty of room on deck, and cabin space for up to 12 people. The €88 million price tag equates to roughly $104.4 million.

Next: It’s all Elemental 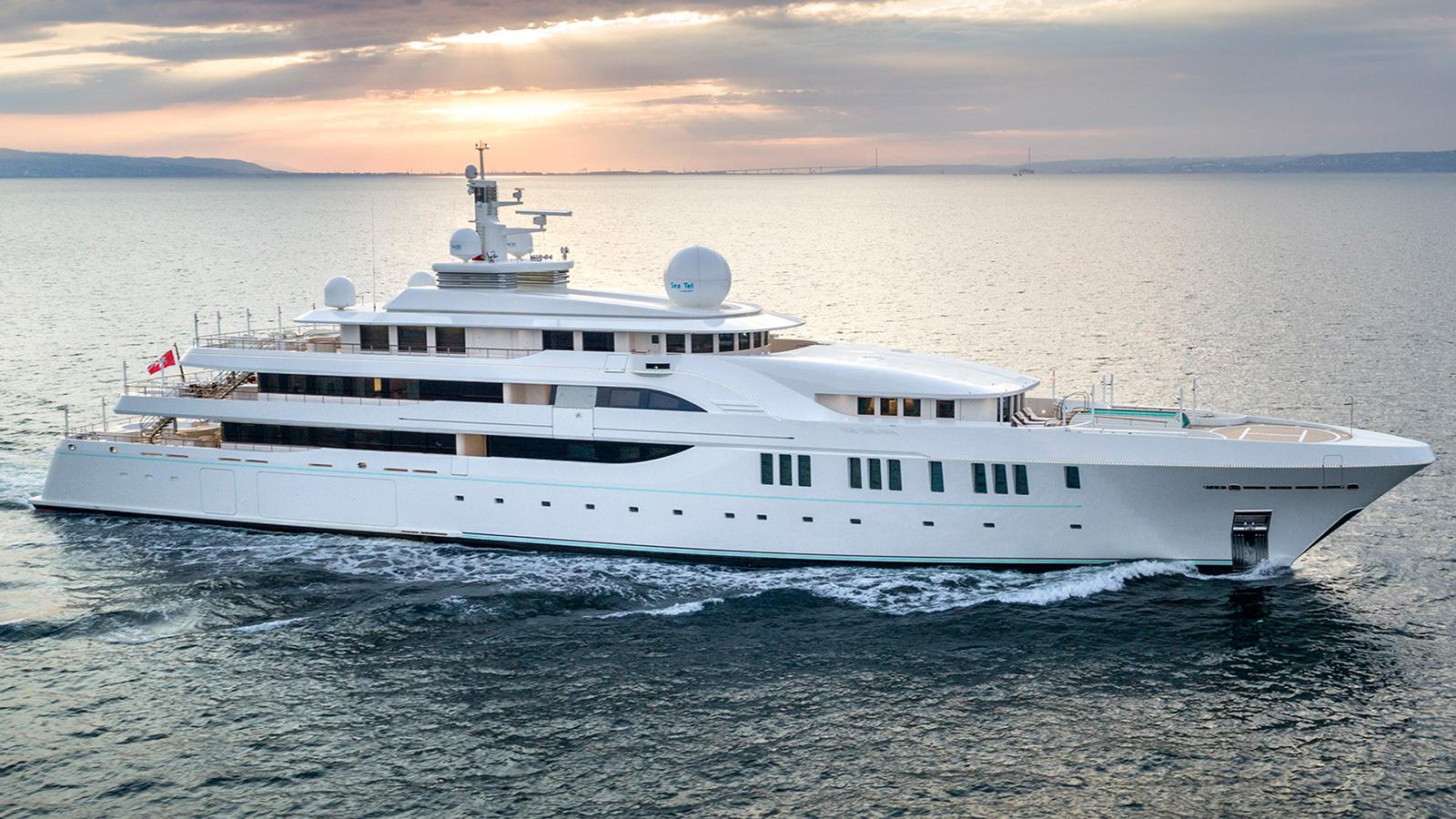 It’s not yet done being built. | Fraser

When this one is done being built, it will be one of the most expensive yachts in the world. Its €112 million price converts to nearly $133 million. If you can pony up that much then you will get what you pay for. A 262-foot yacht with an elegant interior design, room for passengers, and a boat that’s ready to sail as soon as it hits the water.

Next:  To infinity and beyond. 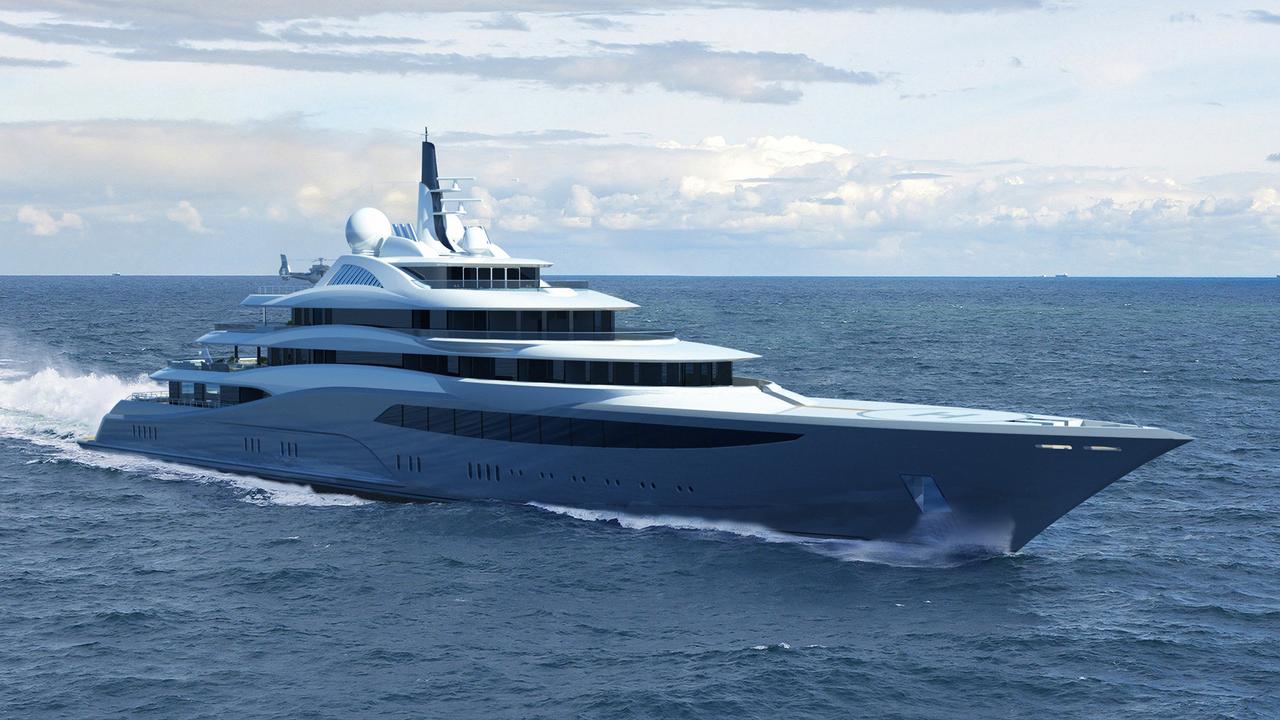 This yacht isn’t for sale yet (it’s scheduled for completion in 2020), but it’ll be worth your money. It’s German-built, will be 104 meters long, will have two movie theaters, and has easy ocean access via a “beach club.” If that sounds nice to you, start following the cues of penny-pinching billionaires to afford the €185 million price.

Next: The beach is always with you on this yacht. 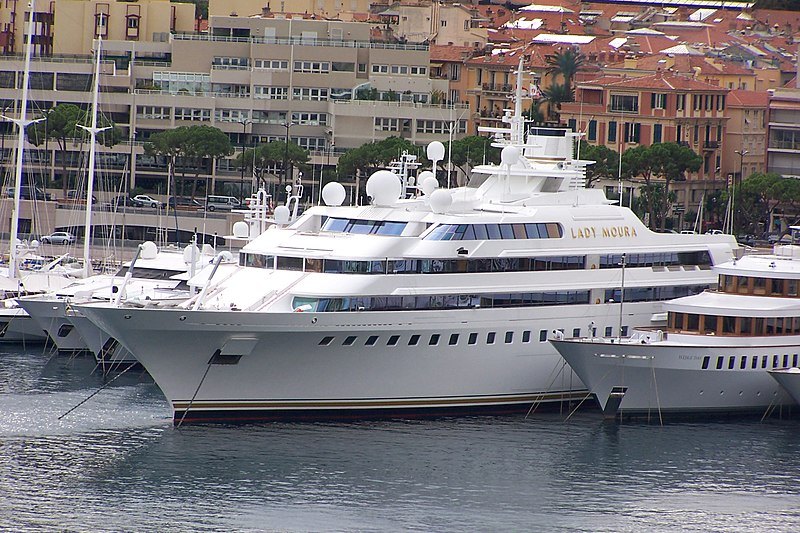 You’ll have to cozy up to Saudi Arabian businessman Nasser Al-Rashid if you want to see the inside of this one. If the outside is any indication, the interior is probably quite nice. The name of the yacht on both sides is made up of letters in 24-carat gold, and a personal beach with real sand slides right down to the water line.

Next: From one beautiful Middle Eastern yacht to another. 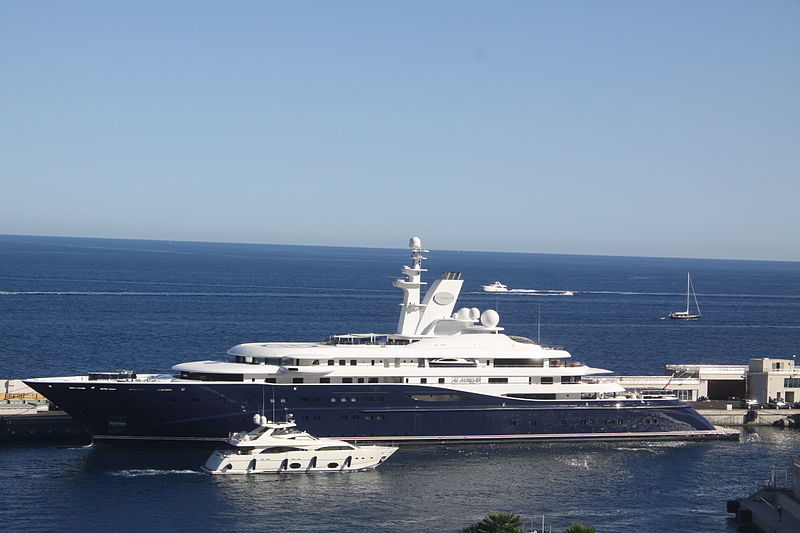 It makes the yacht next to it look tiny. | Piponwa/Wikimedia Commons

Donald Trump wishes he traveled like this. Hamad bin Jassim bin Jaber Al Thani, the former Qatari Prime Minister, is the owner of Al Mirqab. He has close ties to the royal family, and his yacht reflects it. Clocking in at more than 430 feet long, it comes equipped with a jacuzzi, VIP master suites, and the typical super-yacht amenities like a movie theater, helipad, and swimming pool.

Next: Do you see a trend developing? 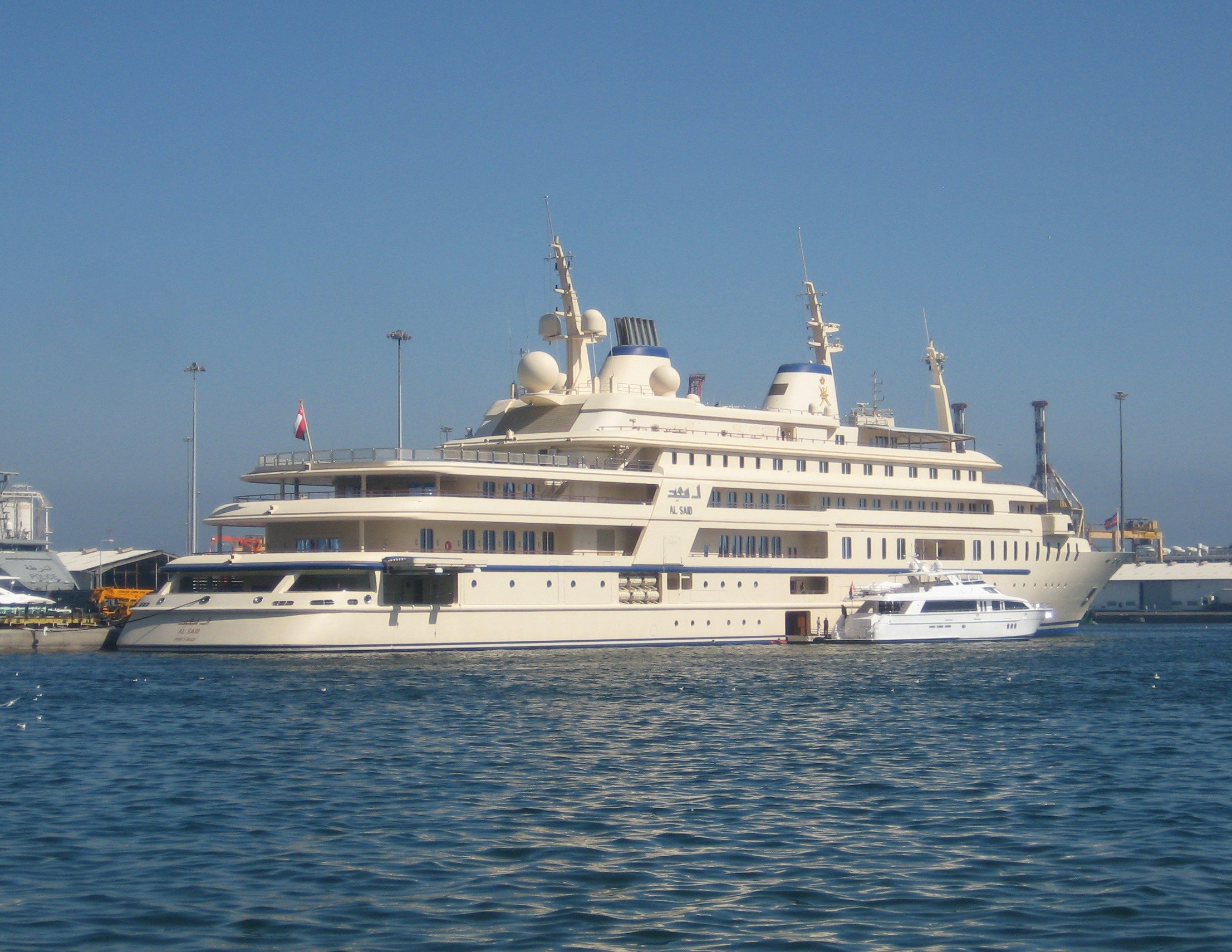 There is also a concert hall inside. | Qatarperegrine/Wikimedia Commons

Another of the world’s most expensive yachts has a port of call in the Middle East. Oman Sultan Qaboos Bin Said Al Said had this boat made for him. In addition to all the usual trappings — including its astounding length (more than 500 feet) and helipad — it reportedly has a concert hall large enough to accommodate a 50-person orchestra.

Next: A plain name for one of the world’s most expensive yachts. 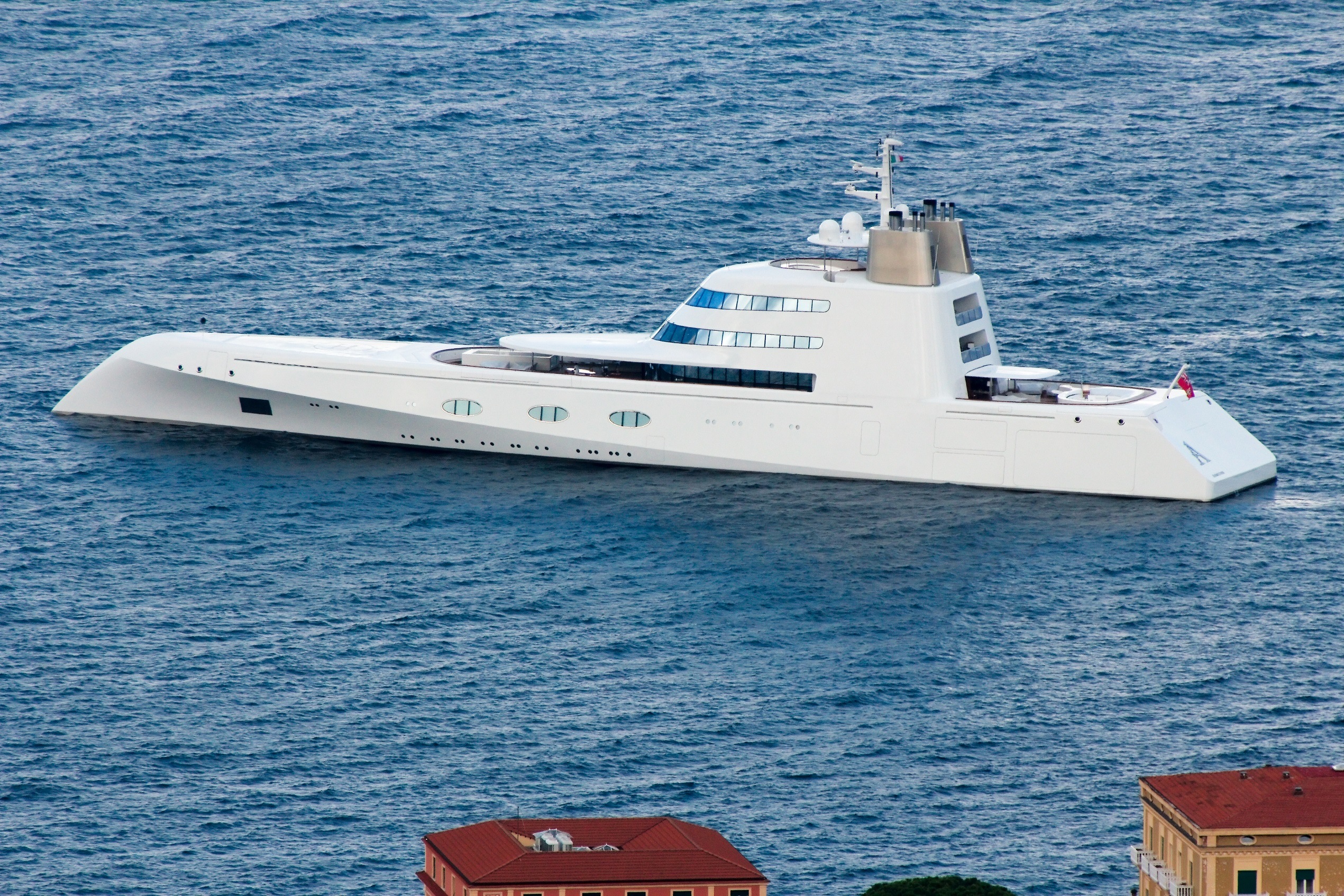 This looks like something out of a Bond movie. | MatthiasKabel/Wikimedia Commons

What this yacht lacks in name recognition it makes up for with its opulence and amenities. The list of elegant features on Motor Yacht A starts with a 2,500-square foot master suite. From there, you get a helicopter hangar, a speedboat housed in the hull, and three pools on board, including a glass-bottomed one.

Next: A grand staircase is one feature of this grand vessel. 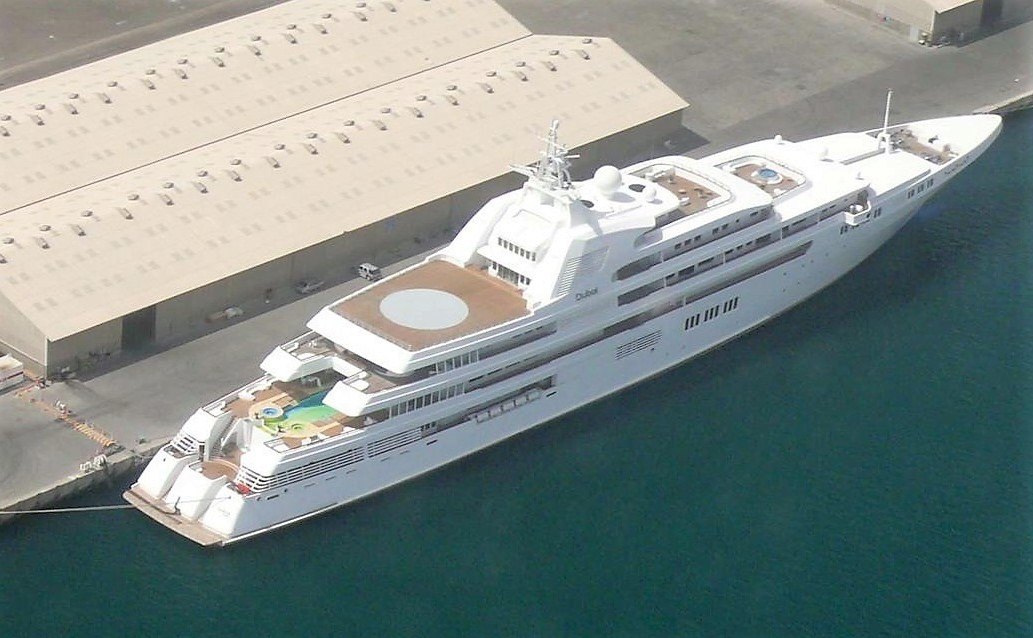 This one now belongs to the ruler of Dubai. | Imre Solt/Wikimedia Commons

First commissioned by the Prince of Brunei, this yacht now belongs to Sheikh Mohammed bin Rashid Al Maktoum. The ruler of Dubai (and prime minister of the United Arab Emirates) has at his disposal one of the fanciest yachts on Earth. At one time the largest yacht in the world, this boat has a grand central staircase in addition to the usual amenities.

Next: A big boat that is also very speedy. 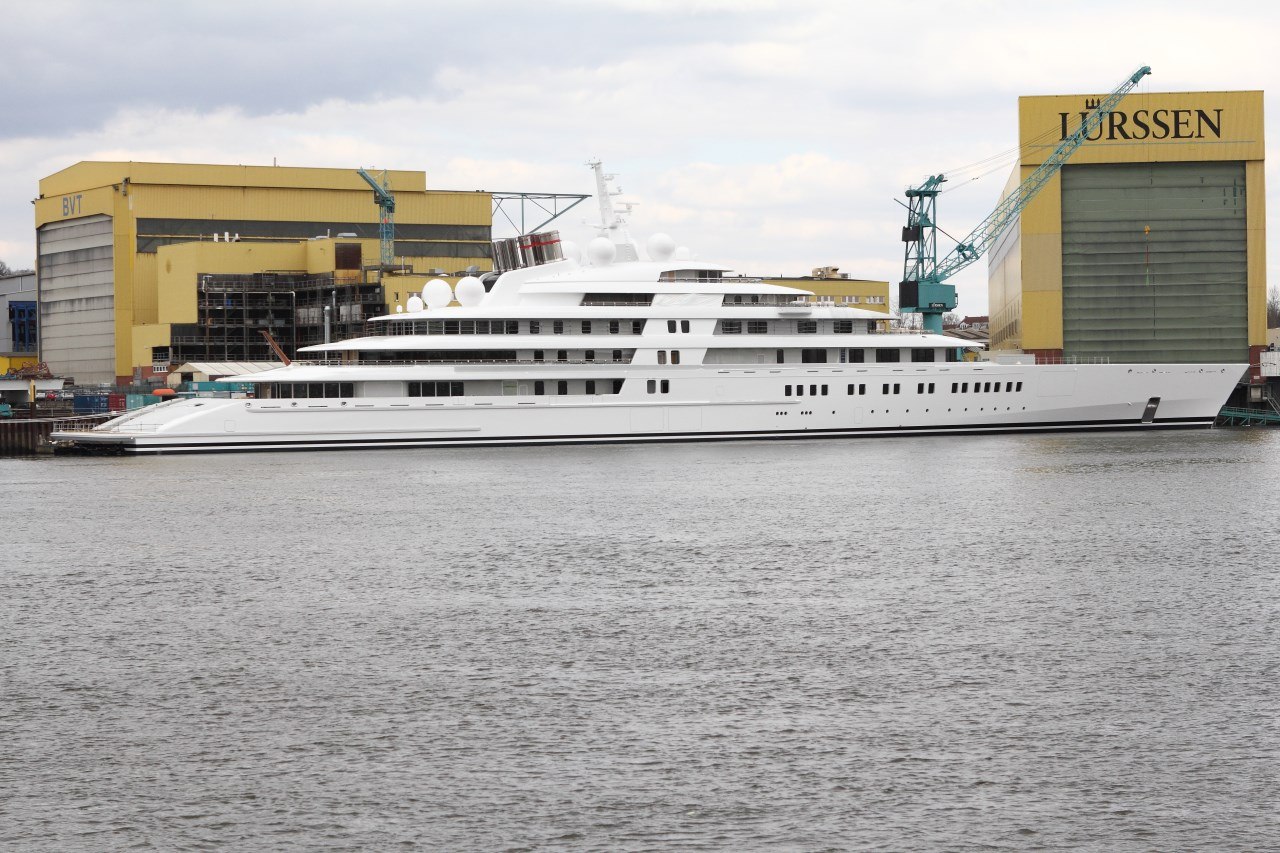 There are many superlatives that can describe Azzam. At close to 600 feet, it might be the longest civilian boat in the world. With a value of $400 million, it’s one the most expensive yachts in the world. Yet one feature truly places it among the most luxurious yachts out there, and that is its top speed. Despite its enormous size, it can achieve 30 knots or close to 35 miles per hour.

Next: You can steal a glance at this yacht, but don’t take any photos. 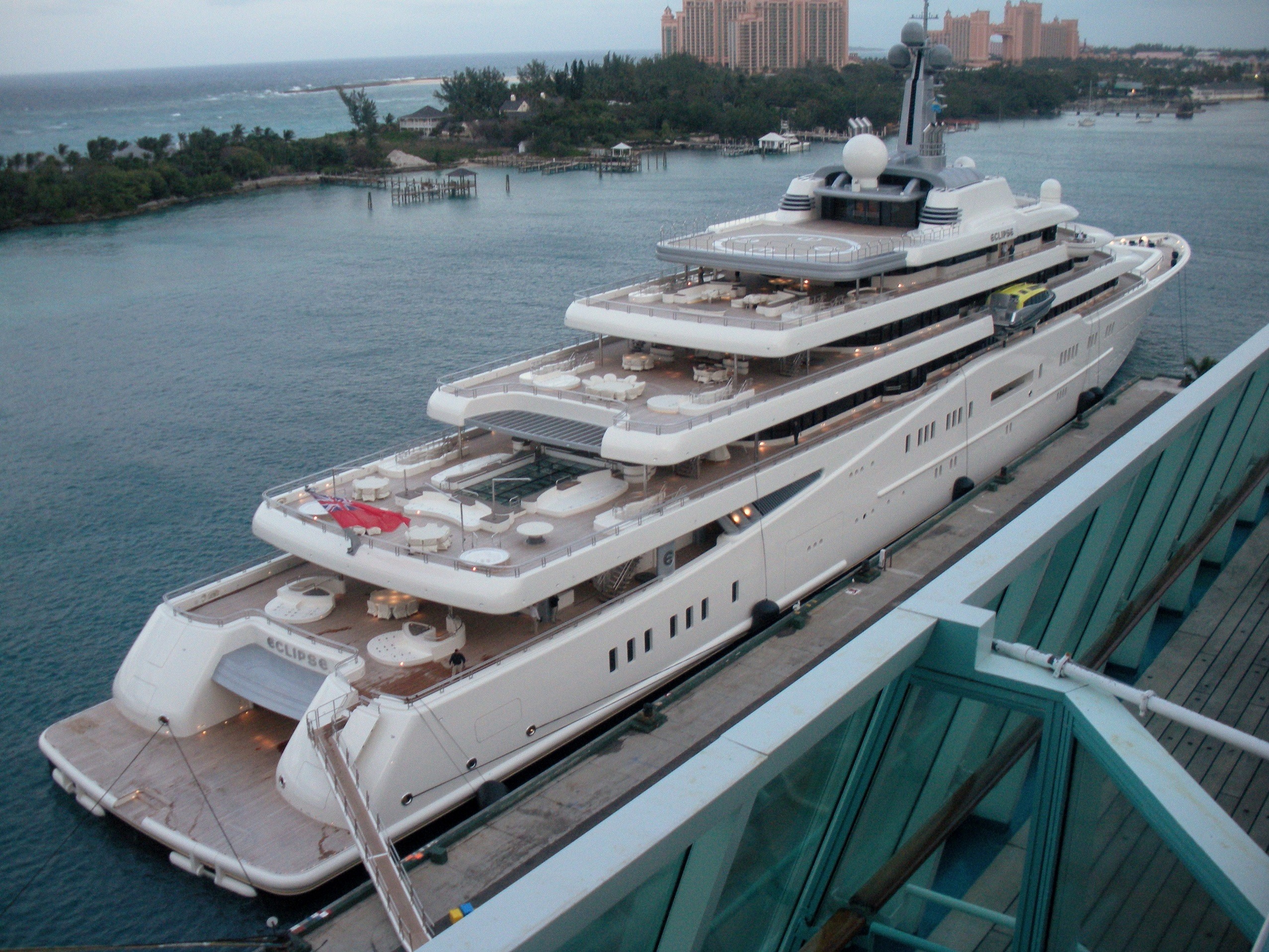 A six-floor yacht is hard to look away from. | DCwom/Wikimedia Commons

You’re not supposed to look at a solar eclipse. The boat named Eclipse? That’s another story. Just don’t try to take photos of the owner. Among the insane amenities, such as a personal submarine, anti-missile system, and bulletproof windows, is a laser system that prevents paparazzi from taking photos. Add it all up and that’s how you get one of the most expensive yachts in the world.

Next: Not to be confused with a summertime dessert. 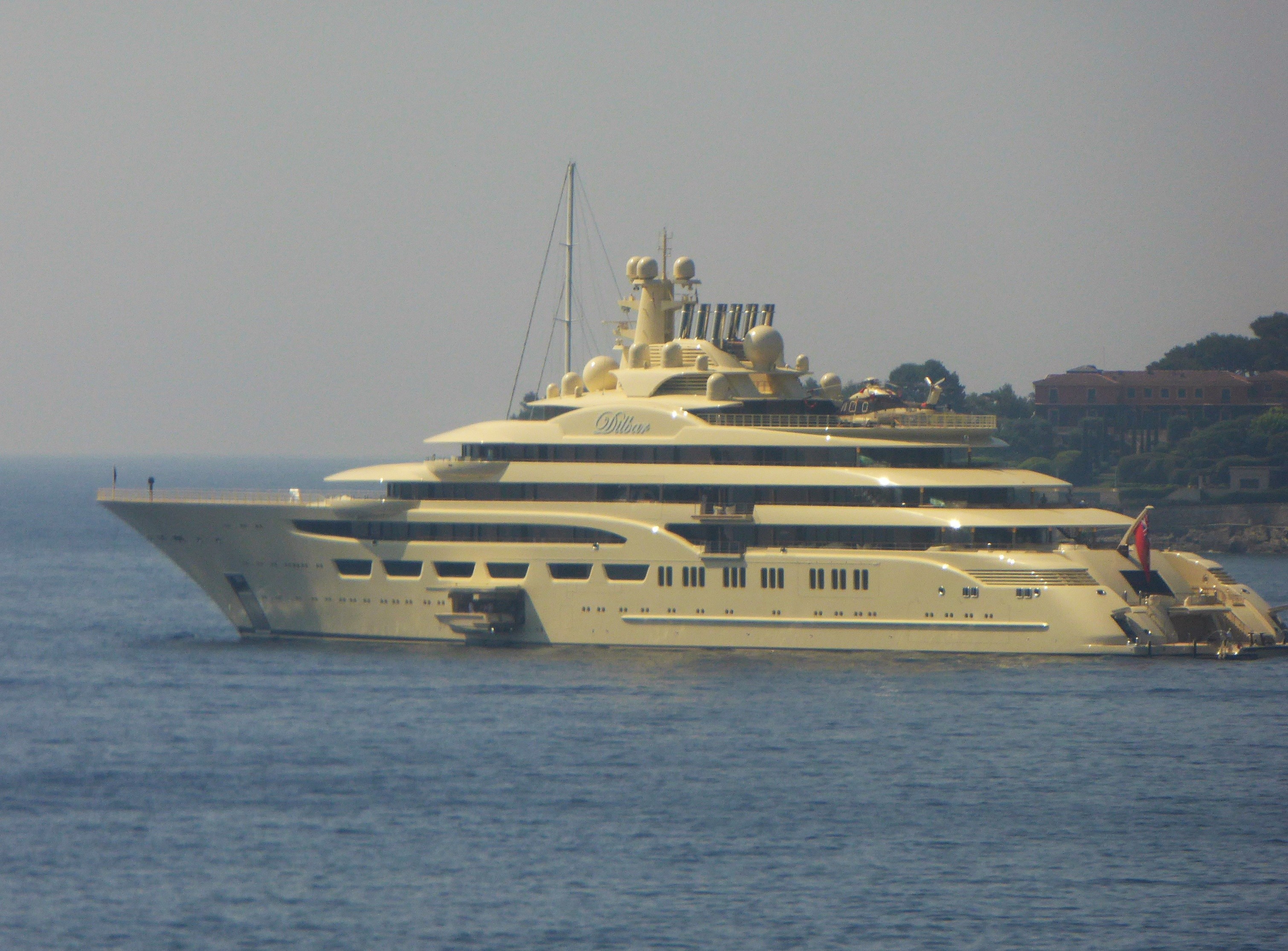 It comes with its own helicopter. | Frankkaribik/Wikimedia Commons

The name of this yacht sounds like a Dairy Queen dessert. Besides one being a mammoth yacht and the other being a frozen treat, the big difference is you can actually afford the dessert. A custom Airbus helicopter comes with this boat, which is one reason it’s one of the most expensive yachts in the world.

Next: A boat made to look like a luxurious city.

This billion-dollar yacht ranks No. 2 on our list, but it might be the most recognizable in the world. That’s because it is made to look like the actual streets of Monaco (Monte Carlo, to be specific). Monaco is a playground for the rich, and the Streets of Monaco lives up to that reputation. The boat features a waterfall, tennis court, an underwater restaurant, and a go-kart course modeled on the track used for the Monte Carlo Grand Prix. When you come up with your own billion-dollar idea, a custom-designed luxury yacht like this could be yours.

Next: No. 1 on our list is worth its weight in gold. 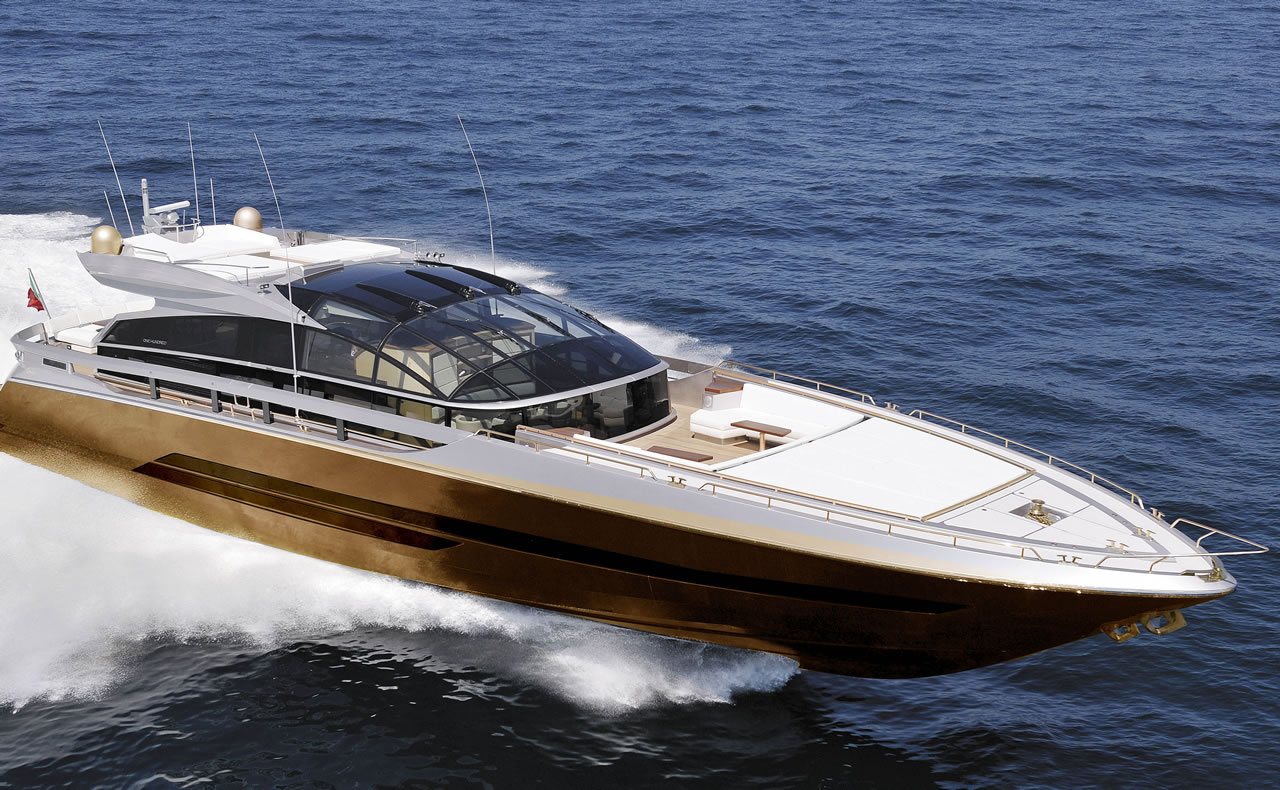 It’s not the biggest, but it’s certainly the most luxurious. | Stuart Hughes

It’s fitting the No. 1 boat on our list has the word history in the title. Because the History Supreme will likely be one of the most expensive yachts in the world for a long time to come. Roughly 220,000 pounds of gold and platinum fixtures can be found throughout, including a hull made of gold. An aquarium made with 24-carat gold and a bottle of liquor with a diamond inside are all part of the package with this boat.