Here’s How To Start Investing in Marijuana

A brand new industry is coagulating right before our eyes. New markets are opening up with each passing election cycle, and entrepreneurs know there is a fortune just waiting to be made. Not only that, but there’s also a mountain of money to be made as an investor. If you thought so, you’re not alone. Marijuana industry penny stocks have undergone a couple of booms and busts over the past few years as profit-seeking professional and amateur alike jumped on the speculation bandwagon. Several large venture capital firms have started getting in on the action and there are even investing summits being held around the country.

However, these early investors could also lose it all if the market and political chips don’t fall in their favor. But that’s all a part of the game. Big rewards call for big risks, and it doesn’t always work out in your favor. In August 2014, the Financial Industry Regulatory Authority (FINRA) issued an alert to would-be marijuana investors, cautioning investors about the risks of such speculative investments and warning them about the potential for fraud. Specifically, FINRA warned about the well-known ‘pump-and-dump’ scheme, in which “fraudsters lure investors with aggressive, optimistic — and potentially false and misleading — statements or information designed to create unwarranted demand for shares of a small, thinly traded company with little or no history of financial success (the pump). Once share prices and volumes reach a peak, the cons behind the scam sell off their shares at a profit, leaving investors with worthless stock (the dump).”

There are still only four states — Alaska, Washington, Oregon, and Colorado (with developments in Washington D.C.) — that have voter-passed marijuana legality laws on the books. While many other states have medical marijuana laws, those markets are generally smaller, more highly regulated, and still exist in a legal gray area. This mix of legal ambiguity (in some cases, legal hostility) and geographical spread makes finding credible investment opportunities extremely difficult. 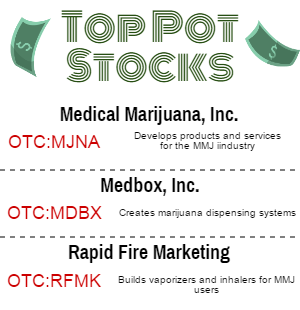 But despite the fact that marijuana is illegal at the federal level, entrepreneurs and investors are still putting their money into play. There actually are a handful of of marijuana stocks — well, pink sheets — that can be purchased right now, for those interested in equity. While a few large pharmaceutical companies have started to dabble in marijuana, most companies with available stock are small and pose significant risk. Shares in the marijuana industry are not listed on the major exchanges, and are instead available over-the-counter, or OTC. There is an inherent danger in this as there is reduced oversight, and therefore increased risk with those stocks.

There are resources and options out there for those interested. Marijuanastocks.com is one of those resources, with listings for numerous marijuana-based stocks and industry insight. Some of the companies that have stock currently available for purchase include Medical Marijuana, Inc. (OTC:MJNA), Medbox Inc. (OTC:MDBX), and Rapid Fire Marketing, Inc (OTC:RFMK).

One of the risks associated with these stocks is that the federal government could, at any time, decide to pull the plug on the entire marijuana legalization movement. So far, they have been reluctant to do anything, as the Obama administration has decided to take a passive approach and respect voter-backed state laws. But that may not necessarily be the case under a new administration, which will enter the White House in 2016. Of course, by that time, the legalization movement may sweep into more states, including California, which would make it very difficult for the feds to pull the plug, considering just how many people  — and how much capital — it would effect.

For entrepreneurs and investors who are willing to look past the risk and focus on the immense potential earnings that the industry could bring in, there is a chance to strike gold. As NerdWallet reports, there are literally billions of dollars to be made, and if the federal government were to reclassify marijuana on a national scale, the industry could become large enough to rival any in America. As they say, with big risk comes big rewards, which is good news for those with the gall to put their money on the line now.

If you want to explore a slightly less risk way to invest in the marijuana legalization movement, look into hemp, which is still in a bit of a tricky area when it comes to the law, but appears to actually be on the fast-track to market. As we’ve explored previously, there is a huge amount of potential within the hemp industry alone, as it satisfies an immense amount of needs ranging from food to building materials. There are even several politicians jumping on the bandwagon to get hemp legalized, recognizing that it can be an economic game-changer for the agricultural industry.

Hemp provides a chance to get into the cannabis market without a lot of the risk associated with marijuana. Though the two plants are cousins, hemp doesn’t have any of the psychoactive agents that marijuana possesses, and really was only placed on the blacklist legally due to a certain level of ignorance when drug laws were crafted. It’s also a good choice for investors who tend to avoid sin stocks in similar industries like alcohol, tobacco, or even defense companies.