IRS to Congress: Obamacare Glitches Not Our Fault 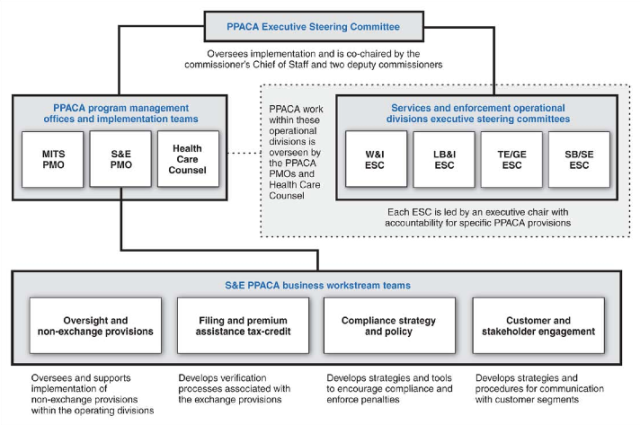 “Basically, HHS has screwed this whole thing up. It’s not your end of the business?” Republican Representative Darrell Issa of California, Chairman of the House Oversight and Government Reform Committee, asked Sarah Hall Ingram, the director of the Internal Revenue Service’s Affordable Care Act office, during a Wednesday hearing. “That’s not the part we’ve been working on, no,” Ingram answered, referring to the troubled website and user experience. “Our systems have come up on time and operated as planned in turning interactions around,” she added.

The number of agencies involved in the rollout of the Affordable Care Act — especially its cornerstone provision, the individual insurance exchanges — has made the search for the party responsible for the glitches plaguing the online marketplaces especially difficult. One of the primary reform aims of Affordable Act was to ensure every American was insured and the primary vehicle of that goal are the state-run or federally-facilitated exchanges.

To keep the insurance plans offered on the exchanges affordable, Americans — whose employers do not offer insurance and who make between 100 percent and 400 percent of the federal poverty line, which tops out at around $45,960 for an individual and $92,000 for a household of four — will be given a federal tax credit to subsidize the cost.

But to determine whether an applicant is eligible for the subsidy or whether they can buy medical coverage on the exchanges, the databases of seven U.S. Agencies, including the Internal Revenue Service and the Department of Homeland Security, must be linked. Since the Congressional Budget Office has calculated 7 million people will enroll on the exchanges next year, and all data — from identity to citizenship to income to family size — must be verified, a massive amount of data will be circulating through the $267-million computer system.

In particular, healthcare.gov, the system that links customers to the online marketplaces for the 36 states with federally-facilitated exchanges, has taken particular heat. Problems calculating subsidies, long wait times, and numerous error messages not only prevented a number of potential enrollees from purchasing policies, but gave the opponents of Obamacare ammunition in their argument that the health care reform is ineffective. Around three-quarters of those 20 million who attempted to enroll reported problems with the system, according to a recent poll conducted by the Associated Press.

However, just as President Barack Obama noted months ago, the administration has maintained that the glitches are a normal part of the rollout of any large government program. In the first weeks of the rollout, administration officials have more often than not chalked up the technical problems with the federally-facilitated exchanges to overwhelming demand.

“Our top issue when it comes to the glitches has been the extraordinary number of people coming to check out plans and find out more about Obamacare. The number has obviously exceeded expectations,” White House spokesman Jay Carney said at a news briefing earlier this week. Similarly, Ingram — the former commissioner of the IRS department for tax-exempt organization — has argued that the implementation of Obamacare has gone smoothly.

The House hearing focused particularly on the role of the IRS in implementation. Since the Internal Revenue Service was charged with implementing the tax-related provision of the Affordable Care Act, most notably the delivery of the tax credit that will assist qualifying Americans finance insurance via the reform’s exchange, the agency plays an important part in its proper functioning. The IRS is also responsible for penalizing larger companies, with 50 or more full-time workers, who do not provide their full-time employees with affordable coverage, and levying the new taxes that fund the law.

On the opening day, October 1, Colorado’s state-run exchange and District of Columbia’s exchange experienced problems calculating subsidies. Yet, Ingram testified that the problems that plagued the launch and stymied enrollment are not the fault of her agency. Of course, the IRS’s job in the implementation of the Affordable Care Act is much less visible than that of the Department of Health and Human Services, or HSS.

But still, the public is worried that the type of involvement that the IRS has, namely its access to massive amounts of private tax payer information, could be dangerous, drawing much attention to the agency. She sought to ease Republican lawmakers concerns about privacy protections, telling them that in the case the information is compromised, the IRS can “turn off the switch in minutes” to halt the flow of data.

The partial shutdown of the federal government, which was precipitated by the conflict between the Republicans and Democrats over the funding for the Affordable Care Act has done little to derail the agency’s ability to get its systems operational. “What we’ve paid attention to is the need to have our computer systems be operational on Oct. 1,” she said. “There is a small number of people who have been in shop to support that portion.”