Is a Steep Wall of Worry Coming for Markets?

The Dow Jones Industrial Average (NYSEARCA:DIA) dropped 181 points, 1.16 percent, on Friday but still squeaked out a 0.5 percent gain for the week. The S&P 500 (NYSEARCA:SPY) fell 0.7 percent on Friday and gained 1.3 percent for the week. The Nasdaq Composite (NYSEARCA:QQQ) lost 0.4 percent on Friday but finished the week with a 1.4 percent gain. However, all of the big news came on Wednesday when major U.S. stock indexes blasted higher on the back of the Federal Reserve announcement that the quantitative easing taper had been postponed.

The Dow closed at 15,529 on Tuesday, September 17, and then the roller coaster started after the Fed announcement on Wednesday as the index rocketed between a low of 15,470 and high of 15,709 to close at 15,676, a high to low swing of 239 points. However, as the week wore on, the Fed induced pop wore off and the Dow Jones Industrial Average settled on Friday at 15,451, below Monday’s close and 0.5 percent above last Friday’s closing price. 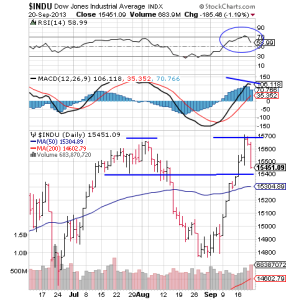 In the chart of the Dow above, we can see how the index rocketed to new levels and now has fallen back to create a double top resistance formation just below the 15,700 level. Overbought conditions have declined with RSI dropping back into the 50s on the late week action, and upward momentum is also slowing. Last week was much like many recent weeks in which market action was “all about the Fed, all the time,” and Dr. Bernanke’s Wednesday surprise announcement regarding “taper off” was a blockbuster.

There are several ways to look at this change in Fed direction:

Further confusion came later in the week when Fed Presidents James Bullard and Esther George offset Wednesday’s decision with comments that the taper could come as soon as October (Bullard) and that it was a mistake and a credibility hit not to taper (George).

The Dow also underwent some major changes this week as Hewlett Packard (NYSE:HPQ), Bank of America (NYSE:BAC), and Alcoa (NYSE:AA) departed the index and were replaced by Visa (NYSE:V), Nike (NYSE:NKE), and Goldman Sachs (NYSE:GS). Among other newsmakers was Blackberry (NASDAQ:BBRY), which got pummeled after a poor earnings report and news that it was laying off more than 1/3 of its workers. Caterpillar (NYSE:CAT) dropped 3.4 percent on Friday on a poor global sales report.

Economic news was mixed with single family starts rising, along with August existing home sales. The Philadelphia Fed report took a huge jump to 22 from last month’s 9 and widely beat expectations. The Empire Index fell while leading indicators advanced and retail sales in Britain declined. Jobless claims rose but much of that was reportedly due to a computer glitch which caused last week’s numbers to be understated.

Now that the long awaited “taper or no taper” announcement has been made, financial markets are looking ahead to see what the reaction will be to the surprising news. Is it good or bad news? Will the “Bernanke Rally” continue? Has the Fed lost control of the bond and stock markets?

All of this will become clear in the days and weeks ahead, and the next major hotspot is the rapidly approaching deadline for funding the Federal government (October 1) and the deadline for raising the debt ceiling which is forecast to be breached sometime in mid-October.

This is shaping up to be the usual partisan battle as the House passed a bill tied to defunding Obamacare which Senator John McCain called a “political suicide note.” The Democratic Senate says “no way” and President Obama says “no” to budget negotiations and so the two sides are digging in for some significant brinkmanship over the next month or so.

While no one really expects a government shutdown or default, the last time Congress and the White House went down this road, we got sequestration and a decline in the Dow from approximately 12,600 in June, 2011, to 10,700 in October, 2011, a drop of some 15 percent.

Other news makers this week will be a full calendar of economic reports:

Bottom line: Global financial markets face massive uncertainty between now and December. The debate over funding the government and raising the debt ceiling will reach fever pitch over the next thirty days and investors will be looking to the October and December Federal Reserve meetings for more hints regarding quantitative easing. Also, a successor to Dr. Bernanke, presumably now Janet Yellen, will be announced sometime in the next two months. The health of the global economy and the outcome of the conflict in Syria remain in doubt and so markets have an exceedingly steep “wall of worry” to climb between now and the end of the year. While uncertainty abounds, perhaps the only certainty is that more volatility can be expected.

John Nyaradi is the author of The ETF Investing Premium Newsletter