Is Bank of America a Safe Investment?

With shares of Bank of America (NYSE:BAC) trading around $15, is BAC an OUTPERFORM, WAIT AND SEE, or STAY AWAY? Let’s analyze the stock with the relevant sections of our CHEAT SHEET investing framework:

Bank of America is a financial institution serving individual consumers, small- and middle-market businesses, corporations, and governments with a range of banking, investing, asset management, and other financial and risk management products and services. With its banking and various non-banking subsidiaries throughout the United States and international markets, the company provides a range of banking and non-banking financial services and products through several business segments: consumer and business banking, consumer real estate services, global banking, global markets, global wealth, investment management, and other.

Bank of America and the Justice Department have reached an impasse in negotiations over a multibillion-dollar settlement deal, raising the stakes in an investigation into the bank’s role at the center of the mortgage crisis. The talks stalled on Monday after the bank’s latest offer — more than $12 billion to resolve state and federal investigations into its sale of mortgage investments that later imploded — fell far short of prosecutors’ demands, according to people briefed on the matter. The Justice Department, which had imposed a Monday evening deadline for the bank to deliver its near-final offer, has sought a settlement worth roughly $17 billion, which would be the largest payout by any bank to date.

On Tuesday, as Bank of America sought to continue negotiations, the Justice Department moved to put the finishing touches on a civil complaint against the bank, said the people briefed on the matter, who spoke on the condition of anonymity. The lawsuit, one of the people said, would accuse the bank of selling mortgage investments that led to billions of dollars in losses. A suit, however, is not imminent. Bank of America, which is torn between a desire to put the mortgage crisis behind it and a resistance to paying penalties it considers overly punitive, could still raise its offer to avert a suit. The bank’s resistance to a deal stems partly from a dispute over mortgage securities sold by Merrill Lynch, the investment house Bank of America bought during the depths of the financial crisis.

Bank of America has said it felt pressured by the Federal Reserve and Treasury Department to go through with the acquisition in late 2008, though the bank was the one to pursue the purchase. For the Justice Department — Tony West, the department’s No. 3 official, is leading the negotiations — the sticking point is both the size of the settlement and the method of doling out the money. Bank of America wants to earmark a large chunk of the money for various forms of assistance to consumers rather than paying it in the form of a cash penalty, the people said. The Justice Department has also pushed for consumer relief, but also wants the bank to pay more in cash. The Bank of America investigation represents an opportunity for the Justice Department to flex its muscle over the financial crisis, which has become a sore subject for prosecutors.

Bank of America stock has struggled to make significant progress in recent times. The stock is currently pulling back and may need time to stabilize. Analyzing the price trend and its strength can be done using key simple moving averages. What are the key moving averages? The 50-day (pink), 100-day (blue), and 200-day (yellow) simple moving averages. As seen in the daily price chart below, Bank of America is trading between its rising key averages which signal neutral price action in the near-term. 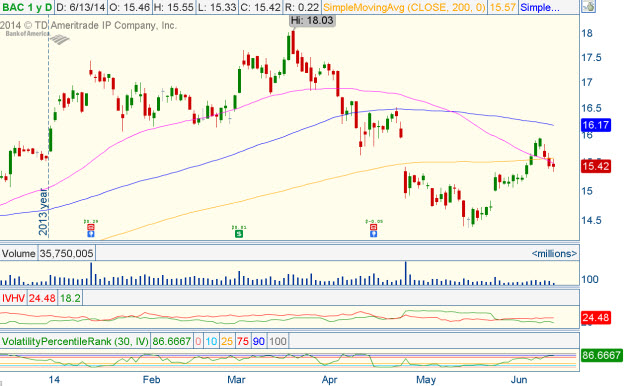 Rising stock prices are often strongly correlated with rising earnings and revenue growth rates. Also, the last four quarterly earnings announcement reactions help gauge investor sentiment on Bank of America’s stock. What do the last four quarterly earnings and revenue growth (Y-O-Y) figures for Bank of America look like and more importantly, how did the markets like these numbers?

Bank of America has seen increasing earnings and mixed revenue figures over the last four quarters. From these numbers, the markets have been pleased with Bank of America’s recent earnings announcements.

Bank of America has been a relative performance leader, year-to-date.

Bank of America is a bank and financial services giant that operates in a recovering financial industry, the backbone of the United States economy. The company and the Justice Department have reached an impasse in negotiations over a multibillion-dollar settlement deal. The stock has struggled to make significant progress in recent times and is currently pulling back. Over the last four quarters, earnings have been increasing while revenues have been mixed, which has left investors pleased. Relative to its peers and sector, Bank of America has been a year-to-date performance leader. WAIT AND SEE what Bank of America does this quarter.