Is Boeing Enticing After Recent Headlines?

With shares of Boeing (NYSE:BA) trading around $135, is BA an OUTPERFORM, WAIT AND SEE, or STAY AWAY? Let’s analyze the stock with the relevant sections of our CHEAT SHEET investing framework:

To say Boeing had a rough start with its 787 Dreamliner is like saying General Motors (NYSE:GM) has seen better years — it’s a heck of an understatement. After years of production delays, Boeing’s revolutionary jet was soon plagued by issues, not the least of which was battery problems that grounded the fleet of Dreamliners for several weeks, costing airlines millions. Once that was patched up, other issues sprouted — it seemed like there was a 787 making emergency landings somewhere in the world every week, from Norway to Japan. After a couple of rather peaceful and incident-free months, though, it appears that the Federal Aviation Administration is finally willing to lift some of the restrictions that were imposed on the aircraft in the wake of the issues. This included a measure forbidding operators to fly the 787 to airports that were more than three hours away, in the event that something occurred in flight. Now, the FAA’s new clearance will allow airlines to operate their 787s on trips as long as five and a half hours long, and make more direct routes, which will help cut fuel consumption.

“Our customers are eager to expand their 787 operations,” Larry Loftis, Boeing’s general manager for the Dreamliner program, said in a statement, quoted by Bloomberg. “We’re delighted that this capability, which was designed into the airplane from the very beginning, has been certified.” The 787 represents many firsts in commercial aerospace (its lithium in batteries come to mind), and it’s therefore unsurprising that the bugs have taken a while to be worked out. That doesn’t make it any less of a burden for already cash strapped airlines, who see the 787 as a key to lowering future flying costs thanks to its lightweight composites and fuel-efficient engines.

Boeing stock has been trending higher over the past couple of months. The stock is currently surging higher and looks poised to continue. Analyzing the price trend and its strength can be done using key simple moving averages. What are the key moving averages? The 50-day (pink), 100-day (blue), and 200-day (yellow) simple moving averages. As seen in the daily price chart below, Boeing is trading above its rising key averages which signal neutral to bullish price action in the near-term. 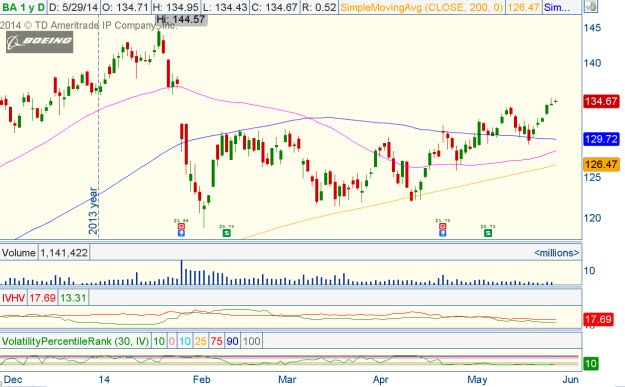 Boeing has seen increasing earnings and revenue figures over the last four quarters. From these numbers, the markets have been pleased with Boeing’s recent earnings announcements.

Boeing has been an average performer, year-to-date.

Boeing is an aerospace company and provider of aircrafts and related products and services to corporations and governments worldwide.  The Federal Aviation Administration is finally willing to lift some of the restrictions that were imposed on the aircraft. The stock has been trending higher over the past couple of months and looks poised to continue. Over the last four quarters, earnings and revenue figures have increased, which has left investors pleased. Relative to its peers and sector, Boeing has been an average year-to-date performer. Look for Boeing to OUTPERFORM.