Is CBS a Buy Now?

With shares of CBS (NYSE:CBS) trading around $62, is CBS an OUTPERFORM, WAIT AND SEE or STAY AWAY? Let’s analyze the stock with the relevant sections of our CHEAT SHEET investing framework:

CBS took the final step to carve off its billboard advertising business, CBS Outdoor. The question now is what CBS will do with the money it has raised. The media company on Wednesday unveiled details of its long-expected tax-free “split-off,” under which it will divest its 81 percent stake in its outdoor unit. CBS announced an exchange offer: Its shareholders will be offered the chance to swap some or all of their shares for stock in the billboard company. The exchange offer follows CBS’s sale of a minority stake in CBS Outdoor in an initial public offering earlier in the spring.

CBS stock has been flying higher over the last several years. The stock is currently trading near all-time highs and looks set to continue. Analyzing the price trend and its strength can be done using key simple moving averages. What are the key moving averages? The 50-day (pink), 100-day (blue), and 200-day (yellow) simple moving averages. As seen in the daily price chart below, CBS is trading above its rising key averages, which signals neutral to bullish price action in the near-term. 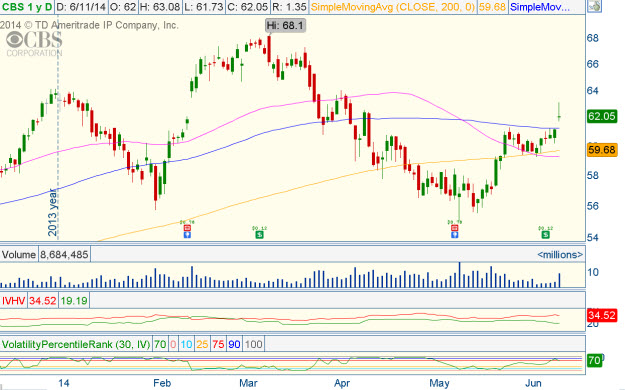 CBS has seen increasing earnings and revenue figures over the last four quarters. From these numbers, the markets have been pleased with CBS’s recent earnings announcements.

How has CBS stock done relative to its peers – Comcast (NASDAQ:CMCSA), 21st Century Fox (NASDAQ:FOXA), and Disney (NYSE:DIS) — and sector?

CBS has been an average performer, year-to-date.

CBS is one of the largest nationwide providers of entertainment and mass media services. The company took the final step to carve off its billboard advertising business, CBS Outdoor. The stock has been flying higher over the last several years and is now trading near all-time highs. Over the last four quarters, earnings and revenues have been increasing which has left investors pleased. Relative to its peers and sector, CBS has been an average year-to-date performer. Look for CBS to OUTPERFORM.