Is Coca-Cola a Healthy Investment?

With shares of Coca-Cola (NYSE:KO) trading around $40, is KO an OUTPERFORM, WAIT AND SEE, or STAY AWAY? Let’s analyze the stock with the relevant sections of our CHEAT SHEET investing framework:

David Winters of Wintergreen Advisers said recently that Warren Buffett is planning to take The Coca-Cola Company private in a leveraged buyout, but Buffett denies it. Buffett told CNBC, that there’s “absolutely no chance of that.” Winters has apparently sent letters to The Coca-Cola Company shareholders, as well as the company’s board and Buffett himself. He criticized the soda maker’s equity plan for this year, which he believes will “significantly erode” the company’s stock price. Winters also said he thinks Buffett will do something similar to what he did with H.J. Heinz Company to Coca-Cola. In that case, he conducted a leveraged buyout and took Heinz private. Buffett’s firm Berkshire Hathaway (NYSE:BRK.A) (NYSE:BRK.B) owned approximately 9 percent of The Coca-Cola Company as of the end of last month. That amounts to 400 million shares.

CNBC’s Becky Quick said as soon as she heard David Winters’s comments about The Coca-Cola Company and Buffett, she immediately called up the Oracle of Omaha to ask him about it. She said her initial reaction was that it was crazy and that Buffett actually asked her to repeat herself, possibly suggesting that he thought it was crazy too. CNBC anchors pointed out that Coca-Cola shares are quite expensive and that it would take a lot of capital to do a leveraged buyout of the soft drink maker. Winters has been locked in battle with The Coca-Cola Company’s management, expressing his disgust regarding the stock payout the soft drink maker is planning for certain employees. The plan was included in Coca-Cola’s recent proxy, and Winters launched a proxy battle, although he didn’t win. Warren Buffett has said that he was also opposed to the stock payout plan, but he separated himself from Winters, saying that he likes The Coca-Cola Company’s management. With Winters’ recent comments, it seems like he hasn’t given up his battle.

Coca-Cola stock has seen its fair share of volatility over the last couple of years. However, the stock is currently surging higher and looks poised to continue. Analyzing the price trend and its strength can be done using key simple moving averages. What are the key moving averages? The 50-day (pink), 100-day (blue), and 200-day (yellow) simple moving averages. As seen in the daily price chart below, Coca-Cola is trading above its rising key averages which signal neutral to bullish price action in the near-term. 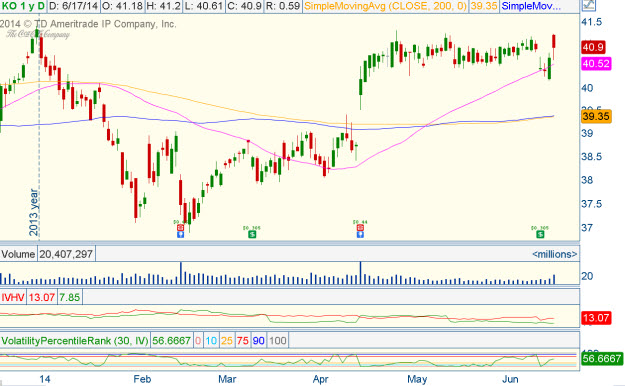 Coca-Cola has seen decreasing earnings and revenue figures over the last four quarters. From these numbers, the markets have had conflicting feelings about Coca-Cola’s recent earnings announcements.

Coca-Cola has been a poor relative performer, year-to-date.

Coca-Cola is an iconic company that provides beverage products through its recognized brands to consumers and companies in just about every country worldwide. David Winters of Wintergreen Advisers said recently that Warren Buffett is planning to take The Coca-Cola Company private in a leveraged buyout, but Buffett denies it. The stock has seen its fair share of volatility over the last couple of years, but is currently surging higher. Over the last four quarters, earnings and revenues have been decreasing, which has produced conflicting feelings among investors. Relative to its peers and sector, Coca-Cola has been a weak year-to-date performer. WAIT AND SEE what Coca-Cola does this quarter.