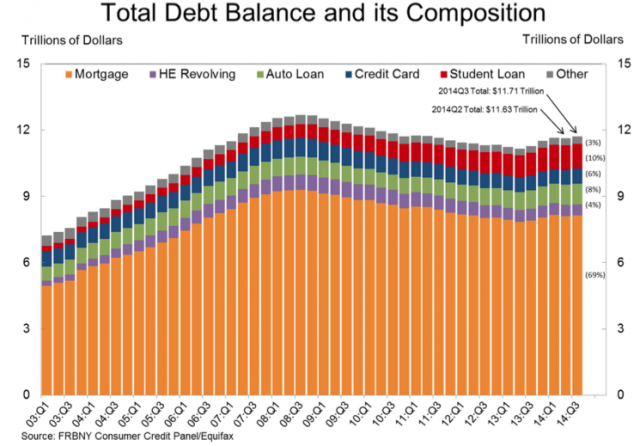 Considering how much time Americans spend accumulating and carrying debt, we may want to reconsider what we call the national pastime. After five years of deleveraging imposed by the financial crisis, debt levels across the economy are on the rise.

The deleveraging of yesteryear is gradually becoming a distant memory. In the third quarter of 2014, outstanding household debt increased $78 billion from the previous quarter, according to a new report from the Federal Reserve. Total household debt, which includes mortgages, student loans, credit cards, and auto loans, reached $11.71 trillion at the end of September, up from $11.28 trillion a year earlier and the highest level since 2011.

Household debt has now increased in four of the past five quarters. “Outstanding household debt, led by increases in auto loans, student loans, and credit card balances, has steadily trended upward in recent quarters,” said Wilbert van der Klaauw, senior vice president and economist at the New York Fed, in a press release. “In light of these data, it appears that the deleveraging period has come to an end and households are borrowing more.”

Almost every component of household debt is on the rise. Mortgages jumped $35 billion in the third quarter to $8.13 trillion, securing their usual spot as the largest component of household debt. Student debt increased $8 billion during the same period and stands at $1.13 trillion. Auto debt gained $29 billion to $934 billion, while credit card debt charged $11 billion higher to hit $680 billion. Home equity lines of credit were the only component to show weakness, down $9 billion to $512 billion.

While a rebound in lending and consumer debt is typically seen as a positive sign of economic confidence, too much debt can be disastrous and lead to longer-term problems. Total household debt remains 7.6% below its peak of $12.68 trillion made in the third quarter of 2008, but student debt continues to make new record highs each quarter. In fact, student debt has increased about $100 billion in only one year. Overall, about 40 million Americans are walking around with some form of student debt. 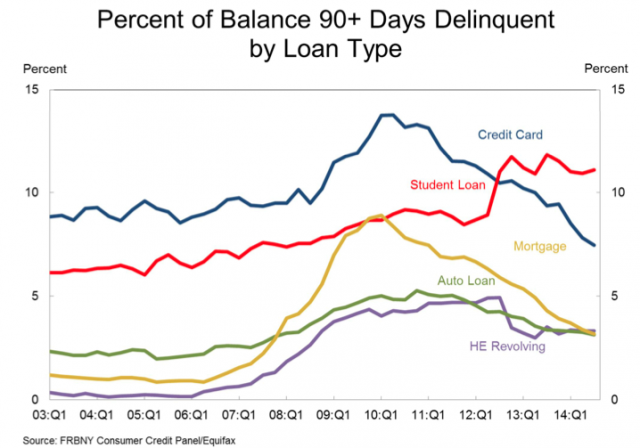