Is General Mills a Healthy Stock For Your Portfolio?

With shares of General Mills (NYSE:GIS) trading around $52, is GIS an OUTPERFORM, WAIT AND SEE or STAY AWAY? Let’s analyze the stock with the relevant sections of our CHEAT SHEET investing framework:

General Mills announced via email on Saturday night that the company had removed a newly introduced arbitration clause from its site that would have reduced consumers’ ability to sue the food producer. In an unexpected turnaround, General Mills stated that due to consumer concerns, it would immediately discard the revised terms posted the previous week. As reported in The New York Times, General Mills spokesperson Mike Siemienas wrote that due to objections to the company’s clause requiring that consumers agree to arbitration or other similar negotiations instead of forming a class action suit, it had removed the condition. The clause would have affected any consumer who purchased a General Mills product, interacted with the company via social media, entered one of their sweepstakes, or downloaded a coupon. General Mills, having paid $8.5 million last year to settle accusations of misleading health claims associated with its Yoplait brand, inserted the arbitration policy after a California judge ruled against their motion to dismiss a case alleging deceptive marketing associated with its Nature Valley brand.

The email was followed up with a blog post by Kirstie Foster, Director of External Communications for General Mills, who confirmed the removal after objections raised by a “misreading” of the change in Minnesota-based company’s terms and conditions. While the maker of brands such as Cheerios, Betty Crocker, and Green Giant still support arbitration as a method of streamlining customer complaints, Ms. Foster apologized on behalf of the company and assured the public that no arbitration clause had been enforced. Credit card and mobile phone companies have increasingly introduced arbitration requirements into customer contracts since the Supreme Court’s 2011 ATT v. Concepcion decision, limiting consumers’ ability to file class action lawsuits. Advocacy groups argue that arbitration eliminates certain consumer protections provided in class action suits. General Mills would have been the first major food manufacturer to include an arbitration clause in its terms and conditions.

General Mills stock has been surging higher over the past couple of years. The stock is currently trading near all time highs and looks poised to continue. Analyzing the price trend and its strength can be done using key simple moving averages. What are the key moving averages? The 50-day (pink), 100-day (blue), and 200-day (yellow) simple moving averages. As seen in the daily price chart below, General Mills is trading above its rising key averages which signal neutral to bullish price action in the near-term. 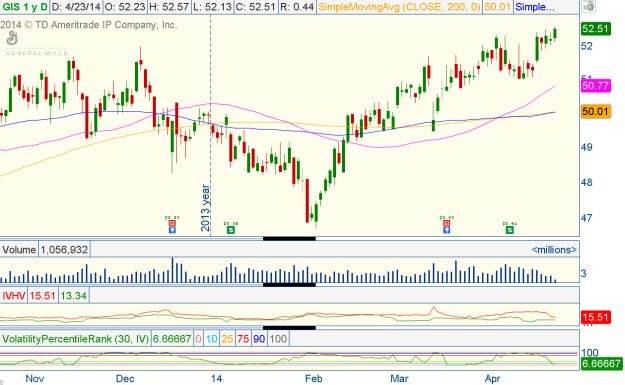 General Mills has seen increasing earnings and mixed revenue figures over the last four quarters. From these numbers, the markets have had conflicting feelings about General Mills’s recent earnings announcements.

General Mills has been an average performer, year-to-date.

General Mills produces and markets branded consumer foods in the United States and internationally. The company announced via email on Saturday night that the company had removed a newly introduced arbitration clause from its site that would have reduced consumers’ ability to sue the food producer. The stock has been surging higher over the past couple of years and is currently trading near all-time highs. Over the past four quarters, earnings have been increasing while revenue figures have been mixed, which has produced conflicting feelings among investors. Relative to its peers and sector, General Mills has been an average performer year-to-date. WAIT AND SEE what General Mills does this quarter.