Is General Motors a Healthy Investment?

With shares of General Motors (NYSE:GM) trading around $37, is GM an OUTPERFORM, WAIT AND SEE, or STAY AWAY? Let’s analyze the stock with the relevant sections of our CHEAT SHEET investing framework:

General Motors is in troubled waters after workers in its South Korea plant announced a strike related to salary and production volume issues. The company is already facing declining earnings in South Korea due to a stronger won. General Motors workers are paid in accordance to a wage scheme designed in 1953. However, workers are demanding a $110 rise in their monthly salary along with the plea for a one-time bonus. The bonus is decided according to the Supreme Court rule of fixed bonus issued last year. However, workers insist on a new contract with several statutory benefits including overtime allowances and severance pay, in proportion to base wages. South Korea is one of the largest manufacturing bases of General Motors in Asia.

The automaker produces nearly all Chevrolet vehicles in the country and exports them to Europe. General Motors Korea operates through four manufacturing plants in the country and an assembly plant in Vietnam. However, General Motors plans to stop selling the Chevrolet brand in Europe by the end of 2015. As a result, the Korean workers are also demanding for increased production in apprehension of retrenchment going forward. General Motors’ South Korea CEO Sergio Rocha had warned the employees of dire consequences if they go on strike. He feared reduced production as well as job security of the workers.

However, 69 percent of workers, totaling about 14,016, voted for the strike for the fourth consecutive year. Strikes in Korea are a common phenomenon and happen almost every year. However, the strike may continue longer than usual this year. General Motors, along with automakers like Hyundai Motor, is facing problems with the current wage system. Notably, a revision in the wage structure will lead to higher labor costs for the automakers.

General Motors stock has been moving higher in recent times. However, the stock is currently pulling back and may need time to stabilize. Analyzing the price trend and its strength can be done using key simple moving averages. What are the key moving averages? The 50-day (pink), 100-day (blue), and 200-day (yellow) simple moving averages. As seen in the daily price chart below, General Motors is trading above its rising key averages which signal neutral to bullish price action in the near-term. 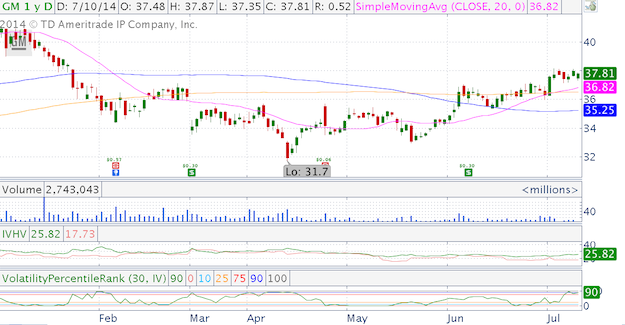 General Motors has seen decreasing earnings and increasing revenue figures over the last four quarters. From these numbers, the markets have had mixed feelings about General Motors recent earnings announcements.

General Motors continues to change its business as it looks to entice companies and consumers with its new and improved vehicles. Workers in its South Korea plant announced a strike related to salary and production volume issues. The stock has been moving higher in recent times, but is currently pulling back. Over the last four quarters, earnings have been decreasing while revenues have been increasing, which has produced mixed feelings among investors. Relative to its peers and sector, General Motors has been a poor year-to-date performer. WAIT AND SEE what General Motors does this quarter.