With shares of General Motors (NYSE:GM) trading around $33, is GM an OUTPERFORM, WAIT AND SEE, or STAY AWAY? Let’s analyze the stock with the relevant sections of our CHEAT SHEET investing framework:

In what is now becoming a weekly or even bi-weekly tradition, General Motors has issued forth more recalls covering a couple of million vehicles, bringing it’s year-to-date total to over 13 million units — three times the number that Toyota (NYSE:TM) recalled all of last year, which led the industry in volume. The issues covered everything from front safety lap belt cables to an insufficiently heated plastic weld and affect 2.42 million vehicles over four campaigns. This means that General Motors has recalled more units this year than its sold in the U.S. over the past five years — combined. The first of this recent quartet of recalls involves 1,339,355 Buick Enclave, Chevrolet Traverse, and GMC Acadia full-size crossovers from the 2009-2014 model years, and the Saturn Outlook from the 2009-2010 model years. This is the one due to the front safety lap belt cables, which can “fatigue” and separate over time. “In a crash, a separated cable could increase the risk of injury to front seat passengers,” the company explained.

Following up the SUVs comes the recall for 1,075,102 of the previous generation 4-speed automatic transmission Chevrolet Malibus and from the 2004-2008 model years, and the Pontiac G6 from the 2005-2008 model years, because of a shift cable that could wear out over time, the company said. This could result in “mismatches of the gear position” indicated by the shift lever, and although there have been no fatalities from any of the four efforts, GM is aware of eighteen crashes and one injury due to this specific campaign. Although Cadillac has been largely exempt from the more severe recalls this year, it was able to dodge this round unscathed: 1,402 Cadillac Escalades and Escalade ESVs from the 2015 model year are being brought in because of an insufficiently heated plastic weld that connects the passenger side air bag to the instrument panel unit, and could result in “a partial deployment” of the air bag in the event of a crash.

General Motors stock has struggled to make positive progress in the past several years. The stock is currently trading near lows for the year as it continues to pull back. Analyzing the price trend and its strength can be done using key simple moving averages. What are the key moving averages? The 50-day (pink), 100-day (blue), and 200-day (yellow) simple moving averages. As seen in the daily price chart below, General Motors is trading below its rising key averages which signal neutral to bearish price action in the near-term. 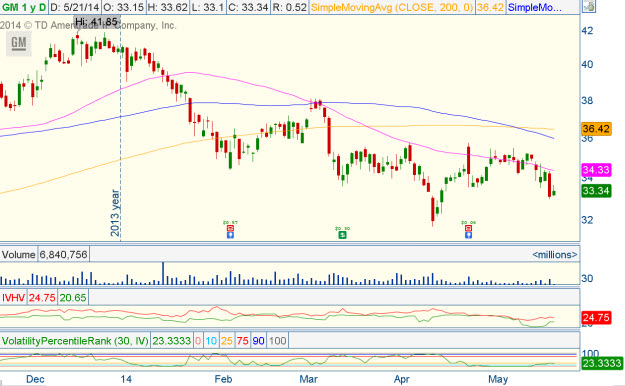 General Motors has seen decreasing earnings and increasing revenue figures over the last four quarters. From these numbers, the markets have had conflicting feelings about General Motors recent earnings announcements.

General Motors continues to change its business as it looks to entice companies and consumers with its new and improved vehicles. The company has issued more recalls covering a couple of million vehicles, bringing its year-to-date total to over 13 million units. The stock has struggled to make positive progress in the past several years and is currently trading near lows for the year. Over the last four quarters, earnings have been decreasing while revenues have been increasing, which has produced conflicted feelings among investors. Relative to its peers and sector, General Motors has been a poor year-to-date performer. WAIT AND SEE what General Motors does this quarter.