Is Goldman Sachs a Buy?

With shares of Goldman Sachs (NYSE:GS) trading around $169, is GS an OUTPERFORM, WAIT AND SEE, or STAY AWAY? Let’s analyze the stock with the relevant sections of our CHEAT SHEET investing framework:

Goldman Sachs is engaged in investment banking, securities, and investment management. It provides a range of financial services to a substantial and diversified client base that includes corporations, financial institutions, governments, and high net worth individuals. The company operates in four segments: investment banking, institutional client services, investing and lending, and investment management. Through its segments, Goldman Sachs provides valuable investment services to consumers and companies worldwide.

Deeb Salem, a former Goldman Sachs Group trader who said he helped the bank earn more than $7 billion, wants to be paid the almost $5 million difference between his 2010 bonus and what he told his mother to expect. Salem said in an arbitration hearing that he was led to believe that his 2010 bonus would be $13 million, down from a $15 million award for 2009 when he was paid more than Chief Executive Officer Lloyd C. Blankfein. Instead, Salem said his bonus was unfairly docked because of a written warning he received about his 2007 self-evaluation. Salem, 35, said the $8.25 million bonus for 2010 didn’t reflect his contributions, while Goldman Sachs argued he was aware that the firm could pay him whatever it wished and that the company considered his conduct in determining compensation. Salem said promises from executives kept him around for another year before a $3 million bonus led him to jump to a hedge fund.

“Let’s be very clear: I was one of the most sought-after investment professionals in the mortgage industry,” Salem said during the February 25 hearing. “I had the opportunity throughout the course of my career and throughout — from that day, from almost every month that I was at Goldman, to leave for other opportunities.” A transcript of Salem’s arbitration hearing before the Financial Industry Regulatory Authority was included as an exhibit to his petition filed last week in New York State Supreme Court. The document was no longer available on the court’s website yesterday after Goldman Sachs filed a motion to seal the petition and parts of related exhibits. A copy of the transcript was provided by Salem’s lawyer and couldn’t be immediately verified in court filings. Oral arguments on Goldman Sachs’s motion to seal the documents have been scheduled for September, court filings show. “These claims are utterly ridiculous, which is why they were rejected by a Finra panel, and unworthy of any further response,” said Tiffany Galvin, a spokesperson for New York-based Goldman Sachs. Salem asked the court to throw out the arbitrators’ ruling against him in part because he said they showed bias, with one member of the panel calling his case “bulls–” during the hearing.

Goldman Sachs stock has not made significant progress over the last couple of quarters. However, the stock is trending higher and looks poised to continue. Analyzing the price trend and its strength can be done using key simple moving averages. What are the key moving averages? The 50-day (pink), 100-day (blue), and 200-day (yellow) simple moving averages. As seen in the daily price chart below, Goldman Sachs is trading above its rising key averages which signal neutral to bullish price action in the near-term. 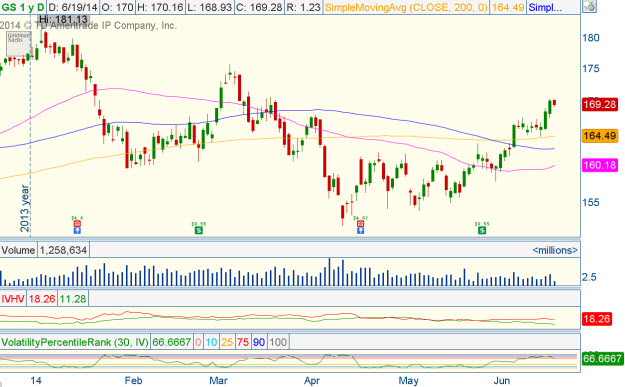 Goldman Sachs has seen mixed earnings and increasing revenue figures over the last four quarters. From these numbers, the markets have been pleased with Goldman Sachs’s recent earnings announcements.

Goldman Sachs has been an average performer, year-to-date.

Goldman Sachs is a bellwether in the financial sector that strives to provide valuable financial products and services to consumers and businesses around the world. Deeb Salem, a former Goldman Sachs Group trader, wants to be paid the almost $5 million difference between his 2010 bonus and what he told his mother to expect. The stock has not made significant progress over the last couple of quarters, but is currently moving higher. Over the last four quarters, earnings have been mixed while revenues have been decreasing, which has left investors pleased. Relative to its peers and sector, Goldman Sachs has been an average year-to-date performer. WAIT AND SEE what Goldman Sachs does next.