Is it Time for Markets to Eye the Political Squabble?

The standoff on Capitol Hill continued into the weekend as the White House and House Republicans were unable to agree on a deal and a proposal by Senate Democrats was shut down, as well. On Sunday, the two Senate leaders, Democrat Harry Reid and Republican Mitch McConnell were huddling in hopes of striking a deal that could bring the standoff to an end. These two were key players in the last settlement that led to the sequestration agreement and so hopes are for yet another 11th hour settlement before Thursday’s deadline. 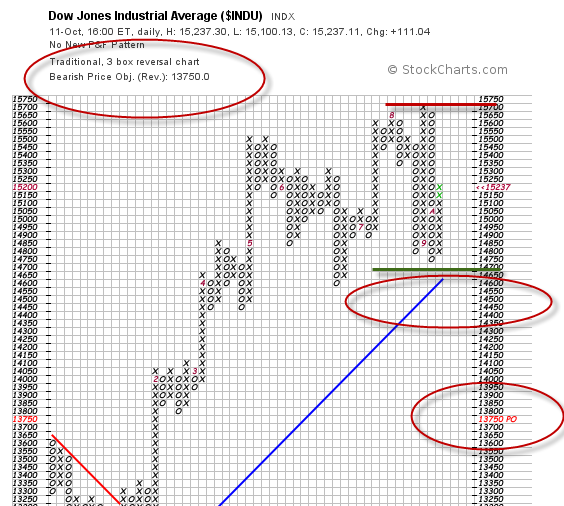 In this point and figure chart of the Dow Jones Industrial Average (NYSEARCA:DIA) we can see how the index is on a “sell” signal with a price objective of 13750, nearly 10 percent below current levels. Major support, however, exists at the 14,600 level and last week the index tested its 200 day moving average at 14748, one day before Thursday’s monster rally.

Earnings will be the big news as many economic reports have been delayed by the government shutdown. Last week’s thin data flow included weekly jobless claims rising to 374,000 from the previous week’s 308,000 and the FOMC minutes which showed mixed views regarding the future of quantitative easing. This week’s data flow will also be thin as most reports will again be delayed. Reports that investors will be watching include October Empire State Index on Tuesday, Fed Beige Book Wednesday, and Philadelphia Federal Reserve on Thursday.

University of Michigan Consumer confidence came in at 75 on Friday, down from last month’s 77.5 and so earnings from retailers and financial stocks will be carefully sliced and diced to determine the health of the American consumer. Overall, earnings growth is forecast to decline and Factset.com reports a record number of S&P 500 (NYSEARCA:SPY) issuing negative guidance on earnings for Q3.

In overseas news, China reported that September exports fell, which was unexpected, and the Chinese news agency, Xinhau, wrote about the U.S. political crisis and advocated for the creation of a “de-Americanized world” and a new international reserve currency to replace the U.S. dollar. The IMF downgraded its estimates for global growth and Christine Lagaarde warned of the global fallout from a U.S. default.

Bottom line: The big news this week will revolve around the political squabble and how global and domestic financial markets react to these developments. Earnings will come into play and technical indicators point to the probability of downside pressure ahead.

Don’t Miss: Do Polls Foreshadow Republican Destruction in the Senate?