Is J.C. Penney Topping Out? 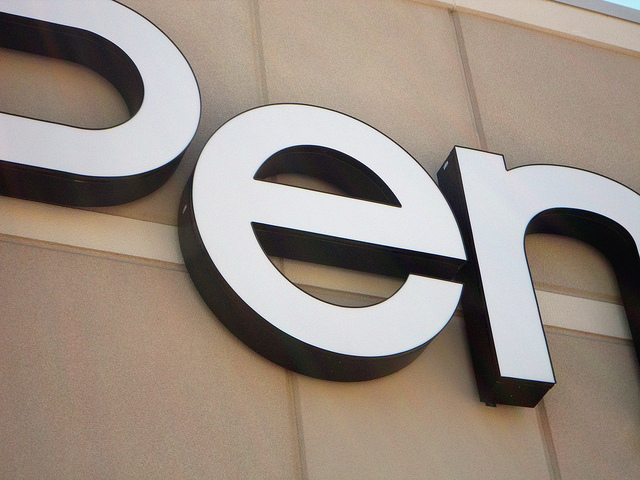 J.C. Penny (NYSE:JCP) has been the poster child for how to not run a retail business. The company and its shareholders haven endured continuing weakness in sales and margins, and as a result, the company has been losing money quarter after quarter.

The stock started out the year in a free fall. Shares fell from about $9 each to just under $5 in early February. After consolidating for a couple of weeks, the company released its earnings for the quarter ended February 1, and it actually reported a small profit. This sent short sellers into a frenzy: The stock rose back to the $9-per-share level, as earlier reports of the company’s demise were seemingly negated by this earnings report.

But since then, the stock has been consolidating in the $8-$9 range, and it seems that whenever the stock gets to $9 per share — roughly the level at which it started the year — sellers enter the market and the stock falls again. As the broader stock market looks weak and as J.C. Penney has been a serial under-performer, I think it is a good time for investors to get out of J.C. Penney shares. Here’s why.

First, one quarter of profitability doesn’t necessarily mean that J.C. Penney is out of the woods. The company achieved this profitability in the quarter that includes the holiday season — this is historically the best quarter for department stores, as they are major beneficiaries of holiday shopping. We can see this impact more clearly if we look at the financials of one of J.C. Penney’s more stable competitors: Macy’s (NYSE:M). Macy’s earned $3.90 per share in the 12 months ended February 1. Of this, $2.16 per share was earned in the most recent quarter, which includes holiday sales.

With this in mind, we can put J.C. Penney’s profitability into perspective. With a company such as J.C. Penney operating at razor-thin margins, there is a fairly good chance that in the slower quarters, sales will not climb high enough to send J.C. Penney into profitability. Even if the company’s recovery continues, we can see losses in the next several quarters.

Second, we have seen weakness more generally in retailers. Companies that investors depended on for stable profit growth, such as Costco (NASDAQ:COST) and Home Depot (NYSE:HD), are showing signs of weakening.  While both companies are reporting optimistic guidance, I remain skeptical. This skepticism is bolstered by a continuation of weak exports out of China, which is America’s largest trading partner. We are also seeing weakness in retail stocks.

The SPDR Retail ETF (NYSEARCA:XRT) is down nearly 7 percent for the year versus the S&P 500, which is essentially flat. Technically, on the last upswing in XRT shares we failed to see a new high, which potentially means that we are seeing lower highs, and we could end up seeing lower lows. This would confirm my fundamental suspicions that the retail market is weakening and that we will see a more sustained downtrend in retail stocks.

With J.C. Penney as a vulnerable retailer, I think investors who are counting on a recovery should consider the broader trend in retail and the potential headwinds that negative fundamentals can bring.

Finally, management has failed to come up with a strategy that defines the company’s market niche. The hope is that J.C. Penney can attract some of the customers that it lost when it stopped offering discounts during the Ron Johnson era. But looking backwards is not a sound approach to running a business, especially one as competitive as the retail space.

While management has done some things right, such as shutting down stores, it did so very late in the game. Note that we learned Thursday that Family Dollar Stores (NYSE:FDO) — a struggling discount retailer — is preemptively shutting down stores, even though it remains profitable. This will hurt that company short term but in the longer run, it will benefit from this proactive strategy.

J.C. Penney waited for several quarters of losses before doing this; it even issued a large amount of stock last year without aggressively shutting down stores. There will be costs entailed in closing stores, and this is going to hit the company’s bottom line. While it increases the company’s chance of survival, without another secondary offering, it does mean that earnings figures will be weak, and this could send shares lower.

If you were lucky enough to get into J.C. Penney when failure seemed like a certainty, then you have made over 60 percent on your money in just a few weeks. But now the stock is at $8.50 per share, not $5 per share. It is the same company that it was a few weeks ago, except that sentiment has improved. There are still a lot of headwinds for the company, and the pain is almost certainly not over.

Given these points, now is a good time to sell J. C. Penney shares.

Disclosure:  Ben Kramer-Miller has no position in J.C. Penney or in any other stock mentioned in this article.