Is Job Creation a Hollow Argument for Lower Taxes and Deregulation? 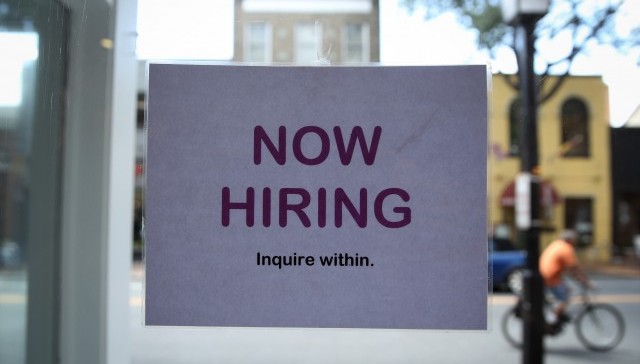 For all the economic triumphs the Obama administration has under its belt, the economy overall still has its proverbial wheels spinning in the mud.

Yes, the unemployment rate is finally below 6%, the stock market has hit record levels, and corporate profits are through the roof, but a great deal of people are still struggling, and many are doubting whether America will ever be able to reclaim the same level of prosperity experienced prior to the financial crisis. The gains that have been achieved have gone to the wealthiest Americans in a largely-lopsided manner, which has helped widen the inequality gap even further.

As a result, many Americans have called for a shift in policy, a higher minimum wage, and for the government to address one of the major issues that is eroding away the ranks of the middle class: wage stagnation. The biggest disparity that has government officials and media sources telling us that the economy is back on track, and the fact that a great deal of American are living in an alternate reality, has its roots in the fact that the tremendous gains the economy has witnessed over the past few years have not been shared. For prosperity to be genuine, it needs to be shared, otherwise the rich get richer, and everyone else is forced to work harder for little or no tangible benefit.

How can we ensure that prosperity is shared, through trickle-down economics or any other mechanism? While it’s probably not possible to absolutely guarantee it, what most people believe is that as long as America has a strong, healthy middle class, the country will find its resolve once again. So how do you cultivate a strong middle class? By offering the promise of economic mobility, the tools — like education and hard work — to climb that ladder, and making sure there are plenty of jobs that pay enough so that people can support their families.

The most important part of that cultivation is, naturally, the jobs. Ever since the recession ripped through the world’s economies, decimating employment numbers and profits around the globe, legislators have been trying to solve the jobs problem. It was mentioned earlier that the unemployment rate is now under 6%, the best it has been in quite a long time. However, that is a bit misleading in that it doesn’t take certain things into consideration, and isn’t an accurate representation of what many people actually think it is: the labor participation rate. Thus, though it appears that we have gained a lot of ground since the Obama administration took office in early 2009, the numbers can be a bit misleading.

So how do we get people back to work, and create new jobs?

Traditionally, the top argument from the business sector is to lower taxes and get rid of regulations. The logic behind that is that if companies have more money to spend — since it didn’t go to paying a higher tax bill — and if regulations are lowered, making it easier to turn a profit, then businesses will grow faster, and need more workers. It’s a sound argument, but is that really how things have worked out over the past few years?

The argument itself is not a new one. Business leaders and legislators, usually conservative, have often argued that businesses are burdened heavily by taxes and regulation, and that the economy suffers as a result. That may very well be true, and surely is the case in some circumstances. A recent example of exactly this argument was recently made by Exxon CEO Rex Tillerson, who says that lifting regulations in the form of a crude oil export ban would help create thousands of jobs at one project alone, and that may in fact be the truth.

But these sort of pleas from business leaders have become standard. The promise of jobs in exchange for lowering tax rates and loosening regulations has become the carrot-and-stick ploy to get legislators –and the general public– on board with these ideas.

An example of how this argument, while persuasive enough to sometimes work, can be rather hollow is in the case of aerospace giant Boeing. After fighting with the State of Washington over taxation policies, Boeing threatened to move operations — and thousands of jobs — out of state if the company’s demands were not met. State legislators eventually gave in, handing Boeing the biggest tax break in history, in exchange for keeping those jobs in-state.

Instead of making good on its promise, Boeing has gone on to lay off thousands from its Washington-based operations, much to the dismay and anger of the state’s residents.

Politicians have also gotten in on the action. Kansas Gov. Sam Brownback has effectively run his state into the ground after promising that awarding businesses tax breaks and more lax regulations would lead to economic prosperity. According to Salon, the state has suffered tremendously as a result of those tax breaks, and in return only had 7,400 new jobs created for all of 2014. Not only that, but since the state government fell so far short in its budget, slashes to education and other state services were made, resulting in mass layoffs and even more unemployed people.

Once more, a case of the promise for economic growth being used to push an agenda that benefits the wealthiest Americans at the expense of everyone else.

Simply put, if the American people opt to keep playing this game, we’ll never be able to reach that carrot — or promise of economic prosperity — that is being dangled in front of our collective faces.

Undoubtedly, there are certain industries that would likely see a spike in growth if certain regulations were lifted. Of course, those regulations are likely in place for a reason, whether it be to protect workers or the environment. Some rather extreme arguments have even called for a dismissal of the minimum wage, saying that if there was no wage floor, companies would be able to hire more people. That’s likely true, but how does a job that pays three dollars per hour help anyone?

Once again, a policy like that — destroying the minimum wage — wouldn’t do anything for the middle or lower classes, and would simply save business owners and the wealthiest Americans on labor costs. The numbers would show that profits are up, and shareholders would be happy, but it would come at the expense of the majority of Americans who are simply trying to make ends meet.

There is the option for Americans to start their own businesses, but the barrier to entry has been raised to a level that is out of reach. Saving enough to invest in a venture of their own has become more difficult, given that the cost of living is up and wages are stagnant. While some people are making it through, the declining rates of business dynamism show that it’s harder than ever to start a successful business.

While the promise for shared prosperity is not always walked-back, it has become an issue that Americans need to read deeper into. After the recession, most people would be perfectly happy just going back to work, and earning a decent living. But that hasn’t happened, and the gains we have made are being hoarded by the rich. The wealthy can keep promising jobs and growth if they are given what they want, but as we’ve seen over the past few years, it absolutely hasn’t happened. Not yet anyway.

So why should the public continue to believe it will? If big business and its political allies want to continue to make promises, they’re going to have to start delivering on them at some point.