Is Microsoft Well-Positioned for the Future?

With shares of Microsoft (NASDAQ:MSFT) trading around $40, is MSFT an OUTPERFORM, WAIT AND SEE, or STAY AWAY? Let’s analyze the stock with the relevant sections of our CHEAT SHEET investing framework:

Microsoft was very focused on the games during its E3 press conference. It had plenty to show, some of which might have surprised viewers, while other items simply fulfilled expectations. Microsoft is coming from something of a weaker position next to Nintendo’s (NTDOY.PK) Wii U and Sony’s (NYSE:SNE) PlayStation 4, but with that it has lined up, it could build up more momentum going forward. There were a few games on the blockbuster side of things. Call of Duty: Advanced Warfare looked as high-octane as ever, though its availability on the Xbox 360 as well as Sony’s PS3 and PS4 may keep the Xbox One from benefitting as heavily as it might have with an exclusive title. The Fable franchise on Microsoft’s consoles has been growing in popularity through the years, and the new, exclusive installment could be a hit for the Xbox One, but it doesn’t seem likely to compare to the success of Sony exclusives like Uncharted: A Theif’s End or PlayStation-heavy titles like Metal Gear Solid V: The Phantom Pain, especially with Sony’s console advantage.

One big mention that could drive sales for the Xbox One was the Halo Master Chief Collection, which is a combination the content from the four main Halo games, remastered in high-quality. It will allow players to relive those older games in new light, while also mixing things up with multiplayer on any of the old stages, going from a Halo 1 map one round to a Halo 4 map the next. Campaigns and co-op will also be available. The weight of the Halo franchise is definitely important for Microsoft’s console war success, but this may not be the ticket, considering it is still old games in a shiny wrapper. The release of Halo 5 will be a more sure-fire hit and pull for the Xbox One. There are still some exclusive releases that may drive a lot of combined excitement. Super Ultra Dead Rising 3: Arcade Remix Hyper Edition EX Plus Alpha Prime is sure to turn a few eyes, as the exclusive DLC will feature a tremendous cohort of favored Capcom characters on top of its already tremendous name. The new Crackdown game could excite fans of the earlier games with the return to intense neon straight out of Tron. The trailer for Platinum Game’s Scalebound looked impressive, albeit not in-game footage, but new IP can be a big draw for the young consoles. A new Gears of War game was also hinted at in a montage of game logos as Microsoft was finishing up — this would surely be of benefit to the Xbox One.

As Microsoft is bringing up the rear in the current gen console war, it has its work cut out for it to catch up. Sony is in the lead and appears set on keeping that lead with its quantity of consoles sold helping it get higher sales on the big cross-platform games like Watch Dogs. Plus it has some big exclusive titles lined up, and may win over gamer intrigue with Project Morpheus, its virtual reality endeavor. Nintendo has shown itself weakening and could be losing grip on its lead over the Xbox One, but Mario Kart 8 recently showed that it still had the potential for both explosive game sales and consoles sales on par with either the PS4 or Xbox One, and it still the Super Smash Bros and a new Zelda game for Wii U to help it in the future.

Microsoft stock has been moving sideways in recent times. The stock is currently pulling back and may need time to stabilize. Analyzing the price trend and its strength can be done using key simple moving averages. What are the key moving averages? The 50-day (pink), 100-day (blue), and 200-day (yellow) simple moving averages. As seen in the daily price chart below, Microsoft is trading above its rising key averages which signal neutral to bullish price action in the near-term. 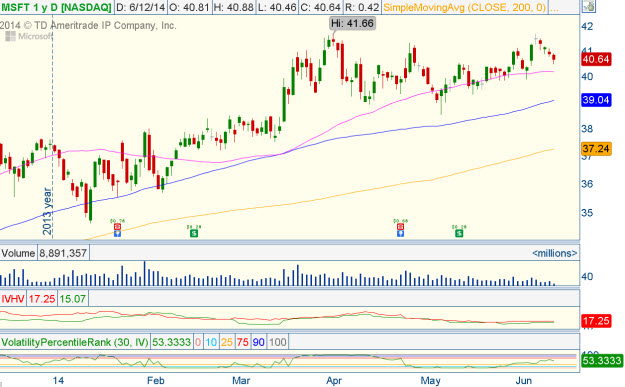 Microsoft has seen mixed earnings and increasing revenue figures over the last four quarters. From these numbers, the markets have had conflicting feelings about Microsoft’s recent earnings announcements.

Microsoft is a technology company that provides valuable software products and services to consumers and companies worldwide. The company was very focused on the games during its E3 press conference. The stock has been moving sideways in recent times and is currently pulling back. Over the last four quarters, earnings have been mixed while revenues have been increasing, which has produced conflicting feelings among investors. Relative to its peers and sector, Microsoft has been a relative year-to-date performance leader. WAIT AND SEE what Microsoft does this quarter.