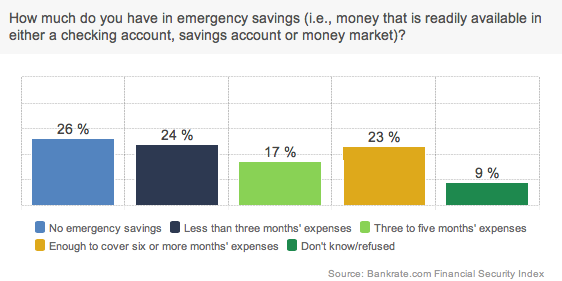 Saving money continues to be a losing battle for many Americans. Even though the Great Recession technically ended five years ago, just over one in four Americans have no emergency savings in their financial arsenal. Adding insult to injury, people in their prime earning years are in the worst condition.

A barrage of stagnant wages, higher living expenses, and an overall weak labor market are taking their toll on piggy banks across the nation. Twenty-six percent of Americans do not have any money placed aside for emergencies, according to a new survey from Bankrate. In fact, 76 percent have saved less than six months’ worth of expenses, and 50 percent have saved less than three months’ expenses. Over the past year, the number of Americans with at least three months’ expenses in savings declined from 45 percent to 40 percent.

The lack of savings is not contained to lower-income households. “Americans continue to show a stunning lack of progress in accumulating sufficient emergency savings,” explains Greg McBride, CFA, Bankrate’s Chief Financial Analyst, in a press release. “Even among the highest income households — those with annual income of $75,000 or above — fewer than half (46 percent) currently have a six-month savings cushion.”

Bankrate finds that people between ages 30 and 49 are more likely than any other age group to have no emergency savings, while those between 18 and 30 are the most likely to have up to five months expenses saved up. McBride adds, “Many of those under age 30 have the benefit of lower expenses due to roommates, living with their parents, or being students. Ages 30 through 49 are high-spending years when expenses often rise faster than emergency savings can keep up.”

If you don’t currently have an emergency savings fund, you should find a way to start one as soon as possible. Saving money on a regular basis will gradually increase your financial security and help you become less dependent on debt when unexpected expenses arise. If you have trouble committing to a savings plan, consider automatic withdrawals that go into a separate account designated for savings.

Aside from improving your financial health, saving money is good for your emotional state. A recent survey from Ally Bank found that saving money is one of the best habits people can take to increase happiness. Among those polled with savings accounts, 38 percent of people said they felt extremely or very happy. In comparison, only 29 percent of those without savings accounts felt the same way. Overall, 84 percent of people said saving money makes them feel good — ahead of eating healthy at 74 percent and enjoying work at 68 percent.