“Recent indicators of weaker industrial data at the beginning of 2013 signal slower growth than in prior years,” the U.S. Energy Information Administration said Tuesday in its forecast of world oil demand for this year and the next. Because the economic recovery worldwide is only expected to be moderate, the lower growth will keep gains in oil demand lower than projected a month earlier. As part of this larger assessment, the EIA noted that U.S. oil consumption is expected to increase fractionally to 18.62 million barrels a day this year from a 16-year low of 18.55 million barrels a day in 2012.

As the EIA announced Wednesday, U.S. crude oil production is expected to “grow rapidly” through 2016. However, over the short term, the agency’s weekly Petroleum Status Report showed evidence of slumping demand in the increasing size of the crude oil stockpile; the rise in U.S. crude oil refinery inputs rose above the previous week’s average, offsetting the fractional drop in crude oil imports.

With analyst expectations predicting an increase in inventories in line with those results, the price of Brent crude futures — Europe’s benchmark index — slid 80 cents to $105.43 a barrel ahead of the report, while West Texas Intermediate oil futures fell 46 cents to $93.74. “The actual physical demand, as evident from the wet barrels market, remains subdued,” VTB Capital oil and commodities strategist Andrey Kryuchenkov told Reuters. 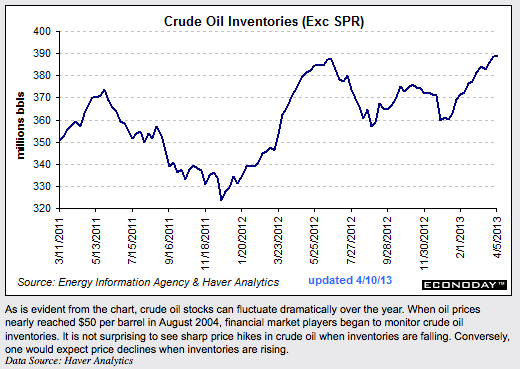