Is the Great Recession Over for Small Businesses? 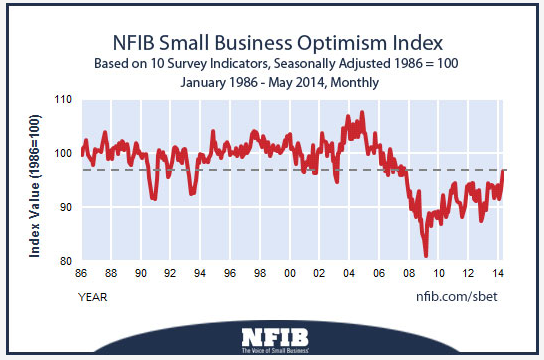 Despite the weak economic conditions still facing much of the country, small businesses felt more optimistic last month than they have in more than six years. However, there are several caveats to the “bifurcated” economy.

The National Federation of Independent Business, a nonprofit small business association representing small and independent businesses, reported that its Small Business Optimism Index increased 1.4 points from April to 96.6 in May, representing the third consecutive monthly gain and the highest reading for the index since September 2007. At the beginning of 2013, the index posted a reading of 88.9. The latest reading is still below the pre-recession average of 100.

“The four components most closely related to GDP and employment growth (job openings, job creation plans, inventory, and capital spending plans) collectively fell 1 point in May. So the entire gain in optimism was driven by soft components such as expectations about sales and business conditions,” said NFIB chief economist Bill Dunkelberg. “With prices being raised more frequently in response to rising labor and higher energy costs it is clear that small businesses are unwilling to invest in an uncertain future. As long as this is the case the economy will continue to be ‘bifurcated,’ with the small business sector not pulling its historical weight in the GDP numbers.”

Overall, five of the index components improved in May, four declined, and one was unchanged. NFIB owners increased employment by an average of 0.11 workers per firm in May (seasonally adjusted), the eighth positive month in a row and the best string of gains since 2006. However, just 55 percent of small business owners reported capital outlays, down 2 points from the previous month. The percent of owners planning capital outlays in the next three to six months also declined 1 point, to 24 percent.

Small businesses are still most concerned with taxes and government regulation, with both remaining mostly unchanged from a year earlier. In fact, 25 percent of businesses say taxes are their top problem, while 20 percent say government red tape. Only 12 percent are most concerned about sales. Meanwhile, the state of consumers is still worrisome.

“Although the Federal Reserve has declared that we are wealthier than at any time in history, it doesn’t feel that way,” said Dunkelberg. “All that wealth isn’t producing much consumer spending. Consumption is estimated to rise 2 cents for every dollar increase in stock market wealth and 10 cents for every dollar in housing wealth, thought to be more permanent, at least until the housing bubble burst.  And it is hard to believe that after the housing bubble and the worst recession since the Depression, that we could be so wealthy so quickly. Perhaps the values we are attaching to the assets we all own are not realistic.”