Is the Mortgage Market Finding Some Takers? 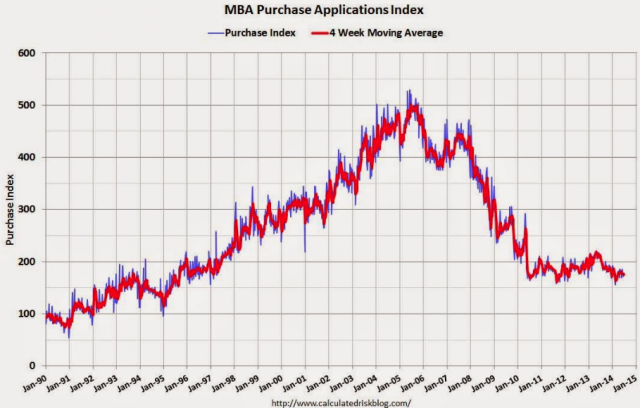 The mortgage market found some support last week amid a slight rise in interest rates, but activity is still below year-ago levels. According to the Mortgage Bankers Association’s latest update, for the week ended July 4, applications for home loans increased 1.9 percent on a seasonally adjusted basis from one week earlier. On an unadjusted basis, the index plunged 19 percent.

The Refinance Index, which declined about 14 percent over the prior three weeks, managed to edge 0.4 percent higher. The seasonally adjusted Purchase Index gained 4 percent. The unadjusted Purchase Index dropped 14 percent and was 10 percent below the same week a year earlier. As the chart above shows, applications have struggled to gain momentum for a sustained period since the housing bubble collapsed. Many home purchases are also being completed with cash.

Although the mortgage market has struggled to find a steady pattern, home prices continue to rise like clockwork. According to the latest reading from CoreLogic, prices increased 8.8 percent in May, marking the 27th consecutive month of year-over-year gains. In fact, 94 of the top 100 metro areas showed year-over-year increases, and every state in the nation has posted price gains over the past 12 months.

“Home prices are continuing to climb across most of the country, which has both positive and negative implications for the housing market,” said Anand Nallathambi, president and chief executive officer of CoreLogic. “While the rapid rise in prices over the past two years has lifted many homeowners out of negative equity, it has also become a negative factor in buying decisions for prospective purchasers weighing affordability concerns.”