Is the Recession Still Hurting Americans’ Standard of Living? 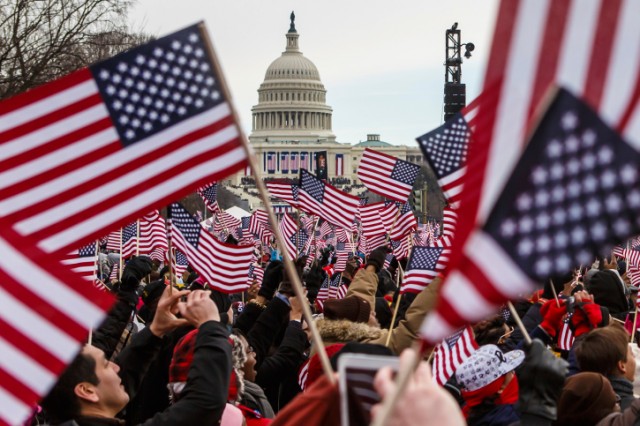 Standard of living can be a nebulous concept, often reduced to some number on a scale. It’s determined by factoring together measures of wealth, employment, education, health, and the availability of material goods and necessities. On a scale of zero through 10, the Organisation for Economic Co-operation and Development — an international economic group of 34 countries, including Turkey, Norway, Australia, Mexico, and South Korea — gave the United States a score of 7.2. The OECD average is 6.6.

Ranking at the equivalent of a C score, it may seem that the U.S. standard of living is still being weighted down by vestiges of the financial crisis. But that is not exactly an accurate assumption. Gallup’s Standard of Living Index, which has a theoretical maximum of 100 and theoretical minimum of minus 100, provides some context. After reaching a low of 14 during the depths of the recession, it has climbed and remained above 50 for all of this year. “Though Americans’ faith in the U.S. economy has retreated into negative territory as 2015 has progressed, their feelings about their personal standard of living have held steady and even improved,” notes the report.

The Standard of Living Index does not delve into the underlying reasons for this year’s high scores, but it does tell us two things. First, approximately 8 in 10 Americans are satisfied with their current standard of living, a level slightly up from the 69% recorded in the depths of the recession. And second, more Americans say their standard of living is improving rather than getting worse. However, here less progress is evident. Less than two-thirds of respondents see their socioeconomic situation improving. 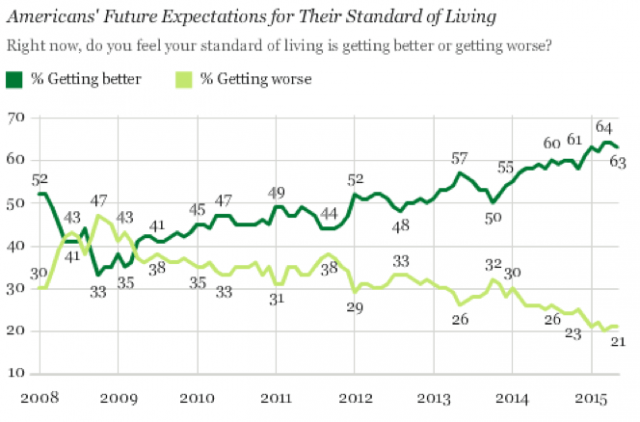 Gallup’s index serves as a slightly anecdotal companion to the OECD’s straight score. But we also need to dive deeper into why the United States ranked where it did, which can shine a light on why Americans are generally optimistic about the future. Here’s where the U.S. stands out, and where if falls behind.

The United States performs very well in many measures of well-being relative to most other countries in the Better Life Index. The United States rank at the top in housing, and income and wealth. They rank above the average in health status, jobs and earnings, personal security, subjective well-being, environmental quality, and civic engagement, but below average in work-life balance.

As the Better Life Index notes, “While money may not buy happiness, it is an important means to achieving higher living standards and thus greater well-being.” Greater wealth most often means better access to quality health care, housing, and education. Overall, the United States ranks high in this category — although, even this report pointed out, inequality is growing.

How much money do households have to live on?

The average household net-adjusted disposable income per capita, or the money available to a household for spending on goods or services, is about $25,908. However, that is not the only important metric to consider. How much financial wealth a household has is hugely important, as that additional cash surplus protects from economic hardship. Across the OECD, the average household net financial wealth per person is around $67,139. Of all 34 nations tracked, Denmark, Ireland and Poland have experienced the best gains in recent years. But average household net-adjusted disposable income per person in the United States is $41,355 a year — the highest of any country in the OECD.

Across the OECD, the top 20% of the population takes home an estimated $54,313 a year in adjusted disposable income, whereas the bottom 20% live on an estimated $8,496 a year. But Chile, Mexico,  Turkey, the United States, and Israel have a much more unequal income distribution than other OECD nations, especially the Nordic and Eastern European countries.

It goes without saying that the availability of good jobs is an economic essential. Creating more and quality jobs is a tough task for governments. Across the OECD, leaders are faced with aging populations and growing social expenditures, meaning facilitating employment for those who can work is becoming a priority.

The United States ranks above average, with 67% of its working-age population employed.

As of early 2015, the OECD-wide unemployment rate was 7%, equivalent to roughly 43.1  million people out of work. That means that about 8.7 million more people are out of work now than in the middle of 2008.

But again, employment rates only tell a small part of the story. Also important are the wages and other monetary benefits that come with employment and job security. On average in OECD countries, workers face a 5.4% chance of losing their job.

Of course, the prerequisites for securing a stable and well-paying job depend on good education and skills. And here, the United States stands out; 89% of adults aged 25-64 have completed upper secondary education, which is well above the OECD average of 75%.

But quality of education does not paint the United States in a good light. The average American student scored 492 in “reading literacy, maths and science in the OECD’s Programme for International Student Assessment,” lower than the OECD average of 497. More specifically, in its most recent 2012 PISA report, the OECD ranked the United States 27th in mathematics, 17th in reading, and 20th in science. These poor results come despite the fact the U.S. spends more per student than most other countries in the group, although socio-economic background is highly predictive of an American student’s performance. By comparison, students in Estonia, Iceland and Norway tend to perform well regardless of their background.

The United States healthcare system is the most expensive in the world. But the OECD report essentially ignored that. Instead, the focus was on life-expectancy rate — one of the most widely used measures of health. There have been remarkable gains in life expectancy over the past 50 years in OECD countries. In the United States, the average lifespan is almost 79 years, just one year lower than the average of 80 years. Analysis “suggests that health care spending growth has contributed to the improvement in life expectancy,” although “other determinants such as rising living standards, environmental improvements, lifestyle changes and education also play an essential role.”

But it must be noted here that a 2014 Commonwealth report found that even though the U.S. spends the most on healthcare, its outcomes are worse than 11 other similar industrialized nations:  Australia, Canada, France, Germany, the Netherlands, New Zealand, Norway, Sweden, Switzerland, and the United Kingdom. The U.S. came last, or near last in measures of health access, efficiency, and equity. 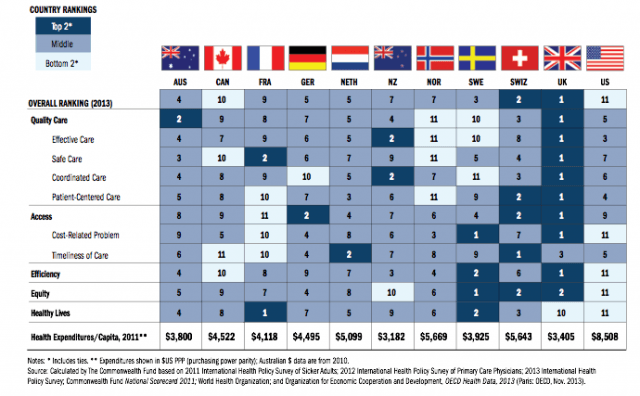 Satisfactory housing conditions is one of the most important measures of living standards. The OECD looks at whether people feel safe, and whether they have privacy and personal space. It tracks overcrowding as well because too-dense living conditions impact physical and mental health and are often a sign of inadequate water and sewage supply. Across the OECD, the average home contains 1.8 rooms per person, and 97.6% of the population lives in dwellings with private access to an indoor flushing toilet.

Housing expenditures are also important to track because they take up such a large share of the household budget. However, housing costs vary dramatically across the OECD. On average, households spend around 18% of their gross adjusted disposable income on shelter. Households in the Czech Republic spend as much as 26% on housing costs, while Russians spend just 11%. In the United States, housing costs amount to 18% of disposable income, giving it a score of 8.1.