Is the Stock Market Ripe for a Crash? 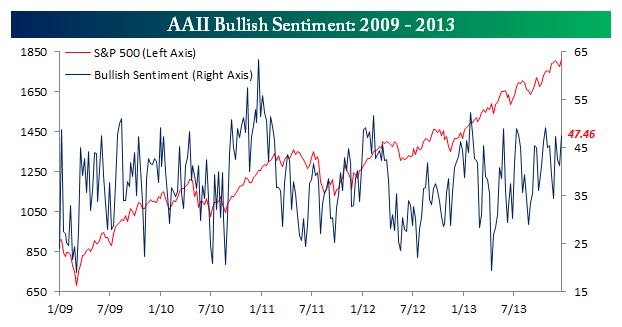 With the stock market hitting all-time highs on a daily basis, optimism does not appear to be slowing down. All three major indices reached new milestones this year and crushed any bear that stood in the way. However, the large crowd of bulls may give some investors reason for concern.

Bears appear to be in full hibernation mode. According to the latest AAII Investor Sentiment Survey, for the week ended December 18, only 25.1 percent of individual investors are bearish on the stock market for the next six months. In fact, the amount of bearish sentiment has been below its long-term average of 30.5 percent for ten consecutive weeks — the longest streak since early 2012.

Other reports also indicate that bears are on Wall Street’s endangered species list. Charles Schwab’s December reading on sentiment reveals that just 10 percent of have a bearish outlook for the next three to six months — the lowest level since the survey’s inception in February 2008, and down from 15 percent in September. In comparison, 90 percent of traders have a bullish or neutral near-term market outlook.

Despite the high level of optimism, many investors are waiting patiently on the sidelines. “While general outlook is more positive than we’ve seen in the past, we haven’t seen bullish sentiment translate into changes in trading behavior yet,” said Kelli Keough, a senior vice president at Charles Schwab. “The survey results reflect what we’re hearing from our Trading Services clients — some say they feel the markets are overvalued, so they’re sitting on cash awaiting a pullback.”

Although the stock market appears ripe for a pullback next year with so many investors expecting the good times to roll, it seems premature to say with conviction they should crash. The Federal Reserve is not going to pull the monetary-easing rug out from investors, and the current rally is not as unusual as some may think.

Considering the psychological milestones reached by the Dow Jones Industrial Average (16,000) and the S&P 500 (1,800), it might feel like this rally is one of the greatest on the record books, but that is far from being the case. As the charts below show, the Dow rally that started March 2009 is below average in both duration and magnitude. The S&P 500’s rally is also neither stronger or longer than the long-term average.

Despite what it may feel like, the returns experienced this year are not that rare. Looking at 116 years of stock returns of the Dow and S&P 500, 20 years posted gains of 20 to 30 percent, while another 14 years witnessed increases of more than 30 percent, according to 361 Capital. That means about 1 in 3 years the stock market has been up at least 20 percent. Since 2009 was the most recent year to fall into this category, Mr. Market is simply receiving his dues.

Interestingly, the strong gains in 2013 does not necessarily spell trouble for next year. The S&P 500 has averaged a return of 12 percent following a year in which it was up 25 to 30 percent, according to LPL Financial Research. In fact, most of the years were followed by several years of strong gains, as seen in 1943, 2003, and 2009.