Is This the Ideal Retail Business Portfolio?

As an investor, I don’t like retailers. The reason for this is simple: Retail is an extremely competitive industry. If you live in an urban or suburban region, it seems that you can hardly go anywhere without seeing a retailer. The same thing goes for the Internet — nearly every website you go to is trying to sell you something, and if a website isn’t trying to sell you something, then it almost certainly has a link to another website that is.

Why take the time to separate the winners from the losers in retail when you can simply focus your research efforts on other investments? The truth is you don’t need to. Nevertheless, there are a couple of things about retailers that suggest to me that you should devote at least a small amount of your portfolio to retail. First, retail is a necessary industry. People need to consume, even if it is only the basics, such as food and clothing. Second, there is little doubt that there are a few retailers out there that have unique competitive advantages over others.

In light of this, I have decided to compile a three-stock portfolio of retailers that I think are worthwhile investments. Before I continue, though, I want to emphasize what I said above: You don’t need to have retailers in your portfolio. But if you choose to for the sake of diversification, I think the following three stocks are the way to go.

Simply put, e-commerce is the future of retail, and Amazon is the top e-commerce retailer. You can purchase practically anything you want to through Amazon, from books to household appliances to food. Amazon has excellent prices, an unbeatable infrastructure, and instant brand recognition.

While these all make Amazon extremely compelling, investors need to keep in mind that Amazon is using virtually all of its operating profits to invest in expanding its distribution centers and other aspects of its infrastructure. The hope is that this is going to pay off in the long run and that the company will be able to further secure its dominant role in e-commerce.

The bad news is that the company has virtually no net earnings, and this makes the stock extremely difficult to value. Nonetheless, I think the stock is somewhat overvalued at $343 per share. When I last wrote about the company, I argued that investors should assume that about 15 percent of the company’s gross profits will make it to net profits once it stops using all of its gross profits to expand its infrastructure.

I also assumed that given the company’s growth rate of roughly 30 percent — assuming some deceleration in the future — that the company’s stock should trade at 30 times this number. That would mean the stock should be bought at about $260 per share. More aggressive investors can pay a little more, considering the competitive advantage that Amazon has. 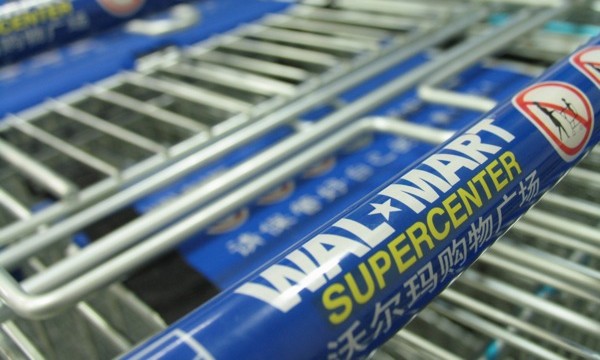 Wal-Mart is the world’s largest retailer, and it therefore has an excellent distribution infrastructure, and it also has extremely competitive pricing. It sells an incredible array of goods that enables it to compete with a large number of other retailers. Furthermore, unlike Amazon, Wal-Mart is easier to value — it has earnings and it pays a dividend.

Wal-Mart is a slow growth story, but it is still growing. While profits have been weak recently due to margin compression, I suspect that this will only be temporary. Going forward, we should see mid-single-digit profit growth, and this will be augmented by the company’s stock repurchase program.

Wal-Mart stock is fairly valued at just under 16 times earnings and with a 2.5 percent dividend yield. The stock has recently broken out of a major consolidation period that lasted for more than a decade. From 2000 to 2012, the stock traded from about $40 per share to $70 per share. It has comfortably traded above this range for nearly two years now, and this means that investors have been willing to accumulate shares at these new highs. I think this bodes well for the company’s future despite its recent profit declines.

This is a stock worth buying in the low- to mid-$70 range, and I think it can be held for the long term. It won’t make you rich, but it will perform very well.

Dollar stores have been rising in popularity. Consumers have less money and they are generally more cautious when it comes to spending money. Even more affluent consumers would rather spend less money when they can. Dollar stores make this easy.

While there are a few that are publicly traded, I chose Dollar General for this piece considering its size and considering that it has double-digit growth while trading at just a hair under 18 times earnings. The company has been opening new stores, and it has been seeing its same-store sales rise. This bodes well for the company’s future.

One concern that I have is that dollar stores such as Dollar General have razor-thin profit margins, and this means that any slight misstep could lead to a loss or a sharp decline in profits. However, this has not been an issue for Dollar General, and this gives me confidence in the company’s management to continue to execute going forward.

The shares are currently trending downwards, so I would wait for a better entry point. There seems to be support around the $54 per share level, or about 5 percent less than the current price. I think investors who buy the stock at this price point will be very happy they did in a few years.

Disclosure: Ben Kramer-Miller has no positions in the stocks mentioned in this article.