With shares of Time Warner (NYSE:TWX) trading around $69, is TWX an OUTPERFORM, WAIT AND SEE, or STAY AWAY? Let’s analyze the stock with the relevant sections of our CHEAT SHEET investing framework:

Time Warner is reported to be in talks to purchase a large stake that’s worth as much as $1 billion in the media empire Vice Media. Once a publication that was aimed at just hipsters, Vice has grown into a huge media conglomerate. It now includes a record label, ad agency, and a show on HBO. The magazine by itself now accounts for fewer than 5 percentof the revenue of the company, which for the most part is dependent upon content that is sponsored on its three channels online. Vice has received attention for a provocative mix of stunt journalism and content such as sending Dennis Rodman, the former star basketball player, to North Korea. The brand has become hugely popular with kids today and with companies that are hungry for the younger consumer, as Time Warner is. The possible stake by Time Warner is expected to put a value on Vice of more than $2.2 billion, which is 50 percent more than its value last year, when a piece was purchased by Rupert Murdoch.

Time Warner stock has been moving higher over the past couple of years. The stock is currently trading near all-time highs and looks poised to continue. Analyzing the price trend and its strength can be done using key simple moving averages. What are the key moving averages? The 50-day (pink), 100-day (blue), and 200-day (yellow) simple moving averages. As seen in the daily price chart below, Time Warner is trading above its rising key averages, which signals neutral to bullish price action in the near-term. 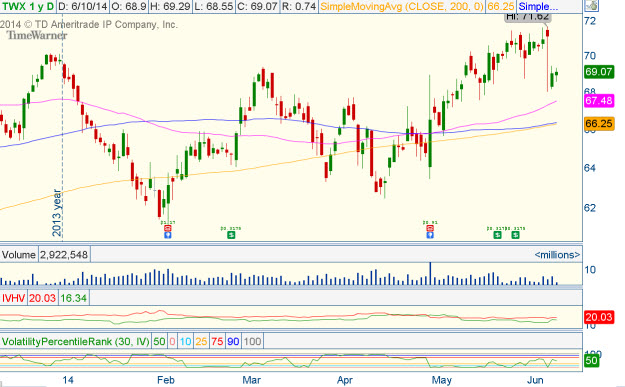 Time Warner has seen increasing earnings and revenue figures over the last four quarters. From these numbers, the markets have been happy with Time Warner’s recent earnings announcements.

Time Warner has been a relative performance leader, year-to-date.

Time Warner provides media and entertainment through a variety of mediums to consumers and businesses all around the world. The company is reported to be in talks to purchase a large stake that’s worth as much as $1 billion in the media empire Vice Media. The stock has been moving higher and is currently trading near all-time highs. Earnings and revenue figures have been increasing over the last four quarters, which has left investors happy. Relative to its strong peers and sector, Time Warner has been an average year-to-date performer. Look for Time Warner to OUTPERFORM.