Is Wal-Mart Poised to Head Higher?

With shares of Wal-Mart (NYSE:WMT) trading around $77, is WMT an OUTPERFORM, WAIT AND SEE, or STAY AWAY? Let’s analyze the stock with the relevant sections of our CHEAT SHEET investing framework:

Last month, Wal-Mart Stores forecast annual profit that fell short of analyst estimates, evidencing the hit the company has taken from the struggling U.S. economy and government benefit cuts. Now, new CEO Doug McMillon is taking the company’s future into his own hands; he and 7,000 other associates met at Wal-Mart’s Year Beginning Meeting in March to discuss the retailer’s new plans. Bloomberg reported on the meeting last weekend and illuminated Wal-Mart’s new game plan to ensure that all stores are better stocked and employ a number of staff members who can sufficiently support in-store operations.

According to Bloomberg, “in-stocks,” or the measure of how much merchandise is available for shoppers to buy, is one area that Wal-Mart needs to focus on in 2014. Over the past year, its attention to keeping store shelves full has declined, and not only have executives noticed, shoppers have, too. The lack of merchandise has caused some loyal Wal-Mart customers to turn to the chain’s competitors, like Target (NYSE:TGT) and Amazon (NASDAQ:AMZN), at a time when Wal-Mart’s earnings are lower than they have been in many quarters.

Wal-Mart stock has struggled to make significant progress over the last couple of years. The stock is currently trading sideways and may need time to stabilize. Analyzing the price trend and its strength can be done using key simple moving averages. What are the key moving averages? The 50-day (pink), 100-day (blue), and 200-day (yellow) simple moving averages. As seen in the daily price chart below, Wal-Mart is trading between its rising key averages, which signals neutral price action in the near-term. 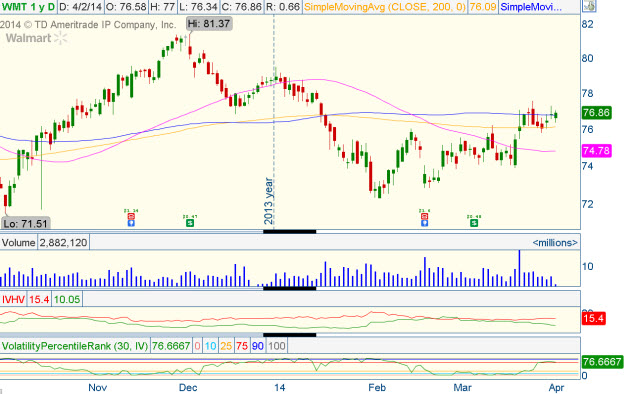 Wal-Mart has seen increasing earnings and revenue figures over the last four quarters. From these numbers, the markets have been pleased with Wal-Mart’s recent earnings announcements.

How has Wal-Mart stock done relative to its peers – Target (NYSE:TGT), Costco (NASDAQ:COST), and Kohl’s (NYSE:KSS) — and sector?

Wal-Mart is a retail company that provides a variety of products and services to consumers and companies worldwide. Bloomberg reported that Wal-Mart’s new game plan to ensure that all stores are better stocked and employ a number of staff members who can sufficiently support in-store operations. The stock has struggled to make significant progress over the last couple of years and is currently trading sideways. Over the last four quarters, earnings and revenues have been increasing, which has left investors optimistic about recent earnings announcements. Relative to its peers and sector, Wal-Mart has been a relative year-to-date performance leader. Look for Wal-Mart to OUTPERFORM.