Is Zynga Undervalued at These Prices?

With shares of Zynga (NASDAQ:ZNGA) trading around $3, is ZNGA an OUTPERFORM, WAIT AND SEE, or STAY AWAY? Let’s analyze the stock with the relevant sections of our CHEAT SHEET investing framework:

Zynga is a provider of social gaming services, with 240 million average monthly active users in over 175 countries. The company develops, markets, and operates online social games as live services played over the Internet, and on social networking sites and mobile platforms. Zynga’s games are accessible on Facebook (NASDAQ:FB), as well as other social networks and mobile platforms, to players globally — wherever and whenever they want. It operates its games as live services, and they are all free to play. However, it does generate revenue through the in-game sale of virtual goods and advertising.

A few weeks ago, Zynga shares rose after the company confirmed that Microsoft (NASDAQ:MSFT) Xbox chief Don Mattrick would be replacing founder Mark Pincus as Chief Executive Officer of the gaming company. Zynga has been facing some major struggles lately, but investors hope that the person who gave Microsoft the Xbox will be able to create similarly innovative technology to save it from failure. Recently, Zynga beat earnings and revenue estimates, but the company announced that it would not be pursuing real money gambling, news that has not sat well with investors.

Zynga stock has been struggling over the last several years. The stock is now breaking lower after a negative earnings report. Analyzing the price trend and its strength can be done using key simple moving averages.

What are the key moving averages? They are the 50-day (pink), 100-day (blue), and 200-day (yellow) simple moving averages. As seen in the daily price chart below, Zynga is trading between its key averages, which signal neutral price action in the near-term. 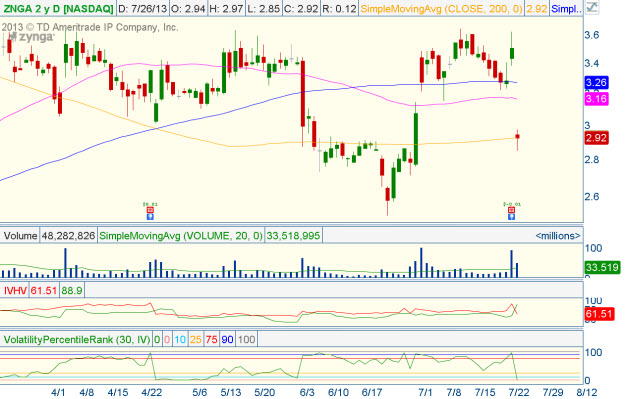 What does this mean? This means that investors or traders are buying a very small amount of call and put options contracts, compared to the last 30 and 90 trading days.

On the next page, let’s take a look at the earnings and revenue growth rates, and what that means for Zynga’s stock.

Zynga has seen improving earnings and decreasing revenue figures over the last four quarters. From these numbers, it seems the markets have not been pleased with Zynga’s recent earnings announcements.

* As of this writing

Zynga has been a weak relative performer, year-to-date.

Zynga provides an interactive gaming experience to consumers worldwide. In a recent earnings report, the company announced that it will not be pursuing real money gambling, which has sent the stock much lower. Over the last four quarters, investors in the company have not been too happy, as earnings have been improving, while revenue figures have been decreasing. Relative to its peers and sector, Zynga has been a weak year-to-date performer. WAIT AND SEE what Zynga does this coming quarter.