For those hoping to start the new year on an optimistic note, there’s at least some good news relating to the state of the American economy. According to the most recent data from the Labor Department, U.S. job openings and small business optimism are at the highest levels seen in years, and as a result, the government is expecting the economy to continue growing.

In other words, it’s a great time to be in the job market. Or at least, much better than it’s been in years.

At the end of November, American employers were looking to fill 5 million open positions, up nearly 3% from October and the highest total in nearly 15 years. That data, released as a part of the Bureau of Labor Statistics’ Jobs and Labor Turnover Survey, helps provide some significant insight into the state of the U.S. economy, particularly the labor market. Not only does it appear that there are more opportunities for job seekers, but also that the public is regaining confidence. 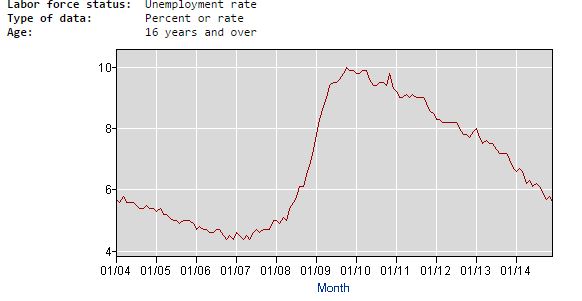 In addition to the spike in job openings, another significant metric, the quits rate, is improving. In November, there were 2.6 million people who quit their job, which was more or less unchanged from October. That is significant because it speaks to workers’ confidence that they’ll be able to find a new job. As the Labor Department said, “quits are generally voluntary separations initiated by the employee. Therefore, the quits rate can serve as a measure of workers’ willingness or ability to leave jobs.” This is a sign of a strong economy, as workers typically wouldn’t walk away from their jobs if they didn’t feel they could find another in a reasonable timeframe.

So far, 2015 has provided plenty of reasons to think that America has finally found solid economic footing. The Labor Department’s report comes not far after the most recent update to the unemployment rate, which is now at 5.6% nationally.

Economists are also feeling optimistic in the wake of the recent reports. Stephen Levy, director of the Center for Continuing Study of the California Economy in Palo Alto, told the L.A. Times that as older Americans feel more comfortable with retiring, it should only help open up more jobs for younger, hungry Americans. “It’s a sign of a strengthening and more confident economy that there are openings — as opposed to extended hours and overtime for existing employees,” he said. “And more baby boomers retiring are going to push openings across the board.”

It’s also a positive sign for those waiting for a wage boom, which has been speculated to be right around the proverbial corner. As we edge closer to so-called “full employment,” workers can become more selective about where they choose to sell their labor, and thus force companies to compete for applicants. “For a long time, growth was slow, so businesses thought, ‘I can get by if I just push my people harder,’ ” Joel Naroff, president of Naroff Economic Advisors, told the L.A. Times. “Growth is not that slow anymore — there’s only so much blood you can draw from a stone.” 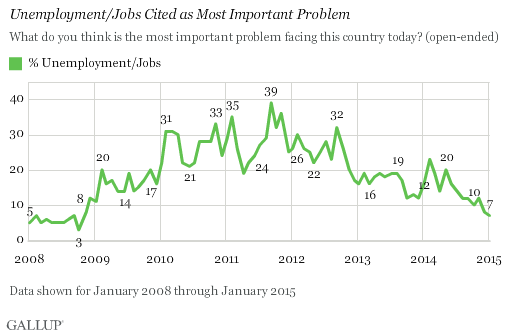 Finally, the public at large is also evidently shifting its focus from jobs to other economic concerns, as well. According to a recent Gallup poll (right), only 7% of Americans feel that unemployment is the most important problem facing the country. That level reached a peak in 2011, when 39% of Americans agreed with that notion, so it appears that for now, fears surrounding the job market have dissipated.

“This is clearly a response to the improved U.S. job market,” Gallup writes.

It’s clear that the public is feeling more confident in the economy, as are many workers. With the job market having improved to the point that there are millions of open positions left to fill, there’s no reason to think that things shouldn’t keep improving and eventually have those effects cascade into other areas, like wage growth. There are many other economic issues to tackle — wages being one of them — but for the millions who have had a hard time finding or securing a job over the past several years, things are looking better now than they have in a very long time.