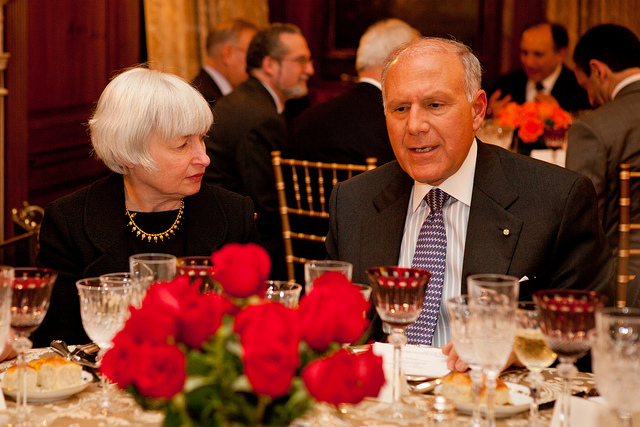 Janet Yellen, who will become the first woman Chair of the Federal Reserve, expressed economic optimism in an interview with Time. Yellen is replacing the current Chair, Ben Bernanke, when his term expires on January 31. She was confirmed by the Senate in a 56-26 vote on January 6.

“I think we’ll see stronger growth this year. Most of my colleagues on the Fed’s policymaking committee and I are hopeful that the first digit [of GDP growth] could be 3 rather than 2,” Yellen said. “The recovery has been frustratingly slow, but were making progress in getting people back to work, and I anticipate that inflation will move back toward our longer-run goal of 2 percent.” Yellen also defended the Fed’s monthly asset-purchases. In December, the Fed decided to scale back the program. Instead of buying at a monthly rate of $85 billion per month, $10 billion was taken out of the equation, bringing the monthly totals to $75 billion. Further reductions throughout 2014 are expected.

Yellen resisted the claim that the program only aided the wealthy. “Our policy is aimed at holding down long-term interest rates, which supports the recovery by encouraging spending. And part of the [economic stimulus] comes through higher house and stock prices, which causes people with homes and stocks to spend more, which causes jobs to be created throughout the economy and income to go up throughout the economy.”

This is in contrast to how Dallas Federal Reserve Bank President Richard Fisher believes the program has operated so far. He explained his views in an interview with a private, educational foundation, the Library of Economics and Liberty. The rich and investors had benefited most from the asset-buying, Fisher stated. “It hasn’t done what we wanted it to do, which is lead to greater job creation for the two middle income quartiles. And that’s who we should be working for as a central bank. We work for the American people, not for the rich.” Fisher rotates into a voting position on the Federal Open Market Committee (or, FOMC) in January.

Yellen also stated she expects the housing market will “pick back up,” and that a full recovery will be made. Analysts have already expressed the opinion that how Yellen acts will determine the future of the housing market. If Yellen tapers too quickly, investors might panic and cause mortgage rates to skyrocket, Diane Swonk, an adviser to the Federal Reserve Board and chief economist at Mesirow Financial Inc., told Bloomberg. Alternatively, if Yellen has a stagnant taper policy, low rates coupled with an improving economy, might lead to an overzealous housing market.

Yellen thinks there is room for improvement in terms of banking reform. ”I think Dodd-Frank is good roadmap and lays out most of the steps that are necessary. But we may also need to take some further steps that have not been taken yet.”