Jobless Claims: Despite Increase, Labor Market Is ‘Having Lift-Off’ 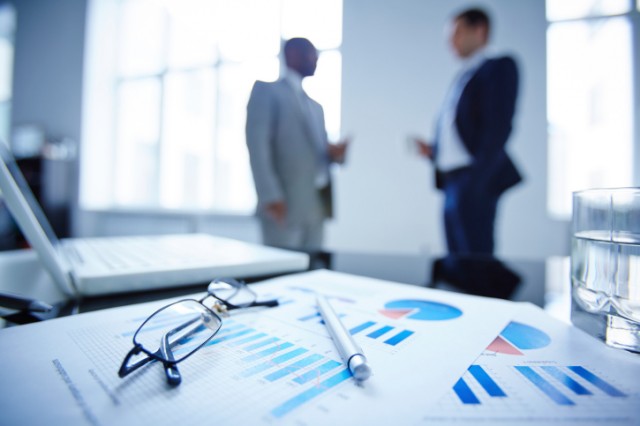 Why Is Last Week’s Increase in Jobless Claims Not Concerning?

The Department of Labor’s Thursday jobless claims report broke the downward trend in emerging unemployment, which over recent months has dropped near pre-recession lows. In the week ended August 9, 311,000 Americans filed initial applications for unemployment benefits — a 21,000-claim increase from the previous week’s upwardly revised 290,000 claims. That jump was the largest recorded since late June and surpassed economists’ expectations. Now applications remain only slightly below the 329,000 new claims filed a year ago. 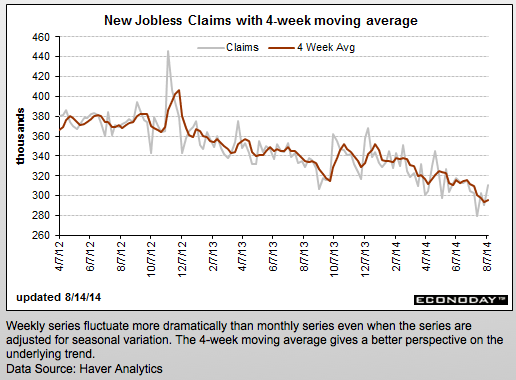 Still, the modest uptick in jobless claims is not surprising. Generally, during the month of July, automobile factories shut down to retool for new makes and models. However, this year, automobile production went into overdrive, meaning fewer than usual automobile factory workers were temporarily without employment. That pushed seasonally adjusted unemployment figures lower last month. At the time, Moody’s Analytics economist Ryan Sweet cautioned in an interview with Bloomberg that the “last couple weeks’ data has been too good to be true.” Now that seasonal patterns have normalized, claims have ticked up on a weekly basis. As Millan Mulraine of TD Securities accurately predicted to the publication ahead of the Labor Department’s report, “We’ll probably see a bit of a give back from the sharp drop we’ve seen in the weeks before.” Still, Mulraine, and a number of other economists, believe “the underlying story on claims remains the same — it’s one that’s fairly constructive and one that’s pointing to a labor market that’s finally, I would think, having lift-off.”

Jobless claims — which serves as a proxy for layoffs — fit within the strong recovery narrative crafted by job creation in the past several months. Although job creation was lower than in the previous several months, July saw solid growth. Employers added 209,000 jobs, meaning July was the sixth consecutive month in which job creation surpassed the key benchmark level of 200,000. As recent jobless claims numbers prove, emerging unemployment, as compared to long-term unemployment, is returning to acceptable levels. Or, in other words, fewer Americans are being laid off, even if long-term unemployment remains elevated and the labor force participation rate stands near record lows. Those are the dual concerns of Federal Reserve Chair Janet Yellen.

What Does the Federal Reserve Think of Labor Market Progress?

On July 30, highlighting the continued stabilization of the labor market, Federal Reserve policymakers announced their decision to further taper the central bank’s monthly asset purchases, even though “a range of labor-market indicators suggest that there remains significant underutilization of labor resources,” as the Federal Open Market Committee noted in a statement, meaning there is still much slack in the market. Yellen told Congress earlier last month that despite the positive turn the economy has taken, she remains concerned about that “slack,” which manifests itself in low labor force participation and sluggish wage growth. Making a case for keeping the central bank’s benchmark interest rate at a near-zero level, the Fed Chair noted that the “strengthening” jobs picture still shows long-term unemployment at “exceptionally high levels.”

The Fed continues to have no plans to raise interest rates, even though the central bank acknowledged economic growth has “rebounded” following the Department of Commerce’s announcement that gross domestic product expanded at a 4 percent rate in the second-quarter. The connection between job growth and economic output seems relatively simply. When more people are employed, consumers have more cash at their disposal, meaning more money is being spent and businesses hire more employees to keep up with the greater demand.

However, when and how gross domestic product and job growth are measured complicates their relationship. Indeed, relatively solid job growth towards the end of the first-quarter contributed to the upward revision of growth from a 2.9 percent contraction to a 2.1 percent contraction. But it is important to remember that the headline GDP number is not a leading indicator, rather it reflects growth through a rear-view mirror. This means a high growth rate can be the result of one-time factors, while low growth could hide underlying strength. With GDP growth remaining choppy and inconsistent throughout much of the past five years of recovery, the link between the United States’ employment situation and its economic output has been lost. But economy is correcting that disconnect.

“This is one of the early steps in the process of a really good run for the labor market,” Jefferies economist Thomas Simons told Bloomberg last week. “If we have fewer layoffs, it’s a necessary precondition for an acceleration in hiring, and as hiring increases and the slack in the labor force is taken up, that should put some upward pressure on wages as well.” But the jobless claims measure calculated by the Labor Department’s Bureau of Labor Statistics is what is known as a low impact indicator compared with its monthly Employment Situation Report.

Are Other Employment Trends Moving in the Same Direction as Jobless Claims?

Alongside the increase in weekly jobless claims, the four-week moving average also rose. Jobless claims provide the first look at the employment situation for any given month, but since the weekly figures can be volatile, economists use the four-week moving average to understand wider trends in employment, which are far more telling of labor market health than weekly readings. Last week, that key measure rose 2,000 to 295,750. Before being upwardly revised, that measure stood at the lowest level recorded since February 2006. Meanwhile, the number of workers continuing to draw unemployment benefits — a measure reported with a one-week lag — increased by 25,000 to 2.54 million in the week ended August 2. Over the past 12 months, continuing claims have decreased by 419,000.

More encouraging for future job creation numbers, the Labor Department’s Job Openings and Labor Turnover report showed that employers advertised more jobs in June than anytime in the past 13 years; the number of unfilled positions rose from May’s 4.58 million to 4.67 million. Data also showed that there are approximately 2 job seekers vying for each opening, a vast improvement for the metric, which stood at a ratio of 1.8  job seekers to every available position before the recession. Improvements in job availability has also led to growth in hiring, with the report showing that the number of people finding employment rose to 4.83 million in June, the most since April 2008. Strength in hiring generally means workers have more confidence in quitting jobs to search for better opportunities.

In June, 2.53 million people quit their jobs, the most since June 2008, while the so-called quits rate — a gauge of worker optimism — remained unchanged at 1.8 percent. By comparison, a reading of 2.1 percent was recorded before the recession began in late 2007. “When workers are scared they won’t be able to get other jobs, they show a reduced willingness to quit their jobs,” Yellen said at a March 19 press conference following the policy-setting Federal Open Market Committee meeting. “Quit rates now are below normal pre-recession levels, but on the other hand, they have come up over time, and so we’ve seen improvement.” 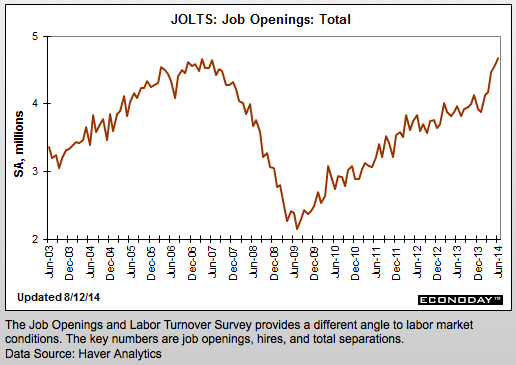 The JOLTS report is a favorite of the Federal Reserve Chair because it describes “the underlying dynamics of the labor market” and provides context for monthly payroll data by tracking resignations, help wanted advertisements, and hiring. To Yellen, the data serves as a measure of the tightness of the labor market and of worker confidence. Labor market tightens refers to the gap between the amount of labor need by employers and the amount of labor on the market narrows.