JPMorgan Kicks the Door Down on Earnings Expectations

JPMorgan Chase (NYSE:JPM) has emerged from the financial crisis as arguably the strongest megabank in the United States. CEO Jamie Dimon navigated the firm through the crash and recovery with few blunders. JPMorgan stock is up more than 23 percent this year to date and nearly 62 percent year over year, handily outperforming the S&P 500 although lagging the gains experienced by some of its peers like Citigroup (NYSE:C), Barclays (NYSE:BCS), and Bank of America (NYSE:BAC).

But with a new earnings season comes another opportunity to set itself apart. The financial industry is changing more quickly now than ever and — par for the course in banking — only the best will survive the onslaught of regulatory reform, economic headwinds, and rapidly shifting consumer and business demand.

With this in mind, JPMorgan kicked the door down when it got out of bed Friday morning, reporting earnings before the bell that beat analyst expectations.

JPMorgan reported net revenue of $26 billion for the second quarter, up 13 percent ($3.1 billion) on the year. The gain was led by non-interest revenue, which climbed $3.5 billion to $15.1 billion overall, and was offset by a $472-million decline in net interest income to $10.9 billion. JPMorgan noted that the decline in net interest income was primarily due to low interest rates.

Net income increased 31 percent on the year, or $1.5 billion, to $6.5 billion. The firm said the increase was “driven by higher net revenue and lower provision for credit losses, partially offset by higher noninterest expense.” Provisions for credit losses were down $167 million on the year. Consumer net charge-offs declined from $2.3 billion in the year-ago period to $1.5 billion this year, or from 2.51 percent to 1.66 percent.

Non-interest expenses increased $900 million, or 6 percent, to $15.9 billion. Part of this was due to higher compensation and litigation expenses. JPMorgan reported a return on tangible common equity of 17 percent, up from 15 percent in the year-ago period.

In addition to the strong performance, JPMorgan is complying with provisions of the Basel Accords. From the earnings:

If the earnings weren’t enough, the bank also announced Friday a second-quarter stock dividend of 38 cents per share, up from 30 cents per share in the first quarter and in line with previous highs for the payout. To round it all out, JPMorgan topped the league table in global investment banking fees. 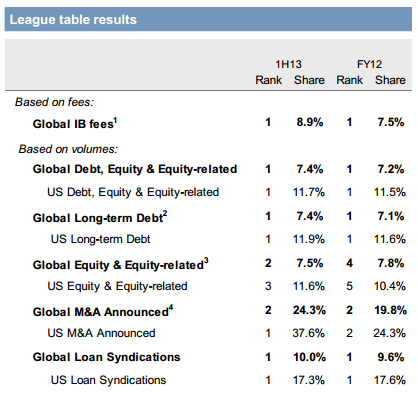 “We maintained our No. 1 ranking in global investment banking fees,” Dimon said. “Consumer deposits were up 10 percent compared with the prior year and credit card sales volumes were a record $105.2 billion, up 10 percent. And, notably, asset management had $25 billion of net long-term client flows, the 17th consecutive quarter of positive net long-term client flows.”

JPMorgan’s second-quarter earnings makes four consecutive periods of growth. A strong equities market, including a rebirth of IPOs this year, has helped boost profits at the bank’s investment division, which makes up about 30 percent of revenues.