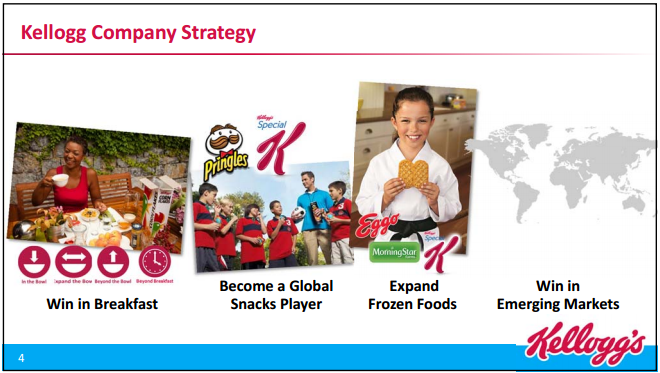 Kellogg Co. (NYSE:K) opened trading on Monday at $62.29 per share and climbed as much as 3.8 percent higher in early trading after reporting favorable third-quarter results. The food-products company reported that net sales remained effectively flat at $3.71 billion, in line with analyst expectations. Earnings increased by 1 cent to 90 cents per diluted share, beating the mean analyst estimate of 89 cents.

Most of the interesting action with Kellogg’s this quarter was at the bottom line, but it’s worth taking stock of what’s going on at the top line briefly. Kellogg’s net sales for the quarter were effectively flat on the year, edging down fractionally, but are up about 6.2 percent this year to date.

The obvious question is this: Where is the growth coming from? An important part of the answer is not from the U.S. Morning Foods segment, which is now the company’s second largest reporting revenue segment. Sales in the segment decreased fractionally on the year to $2.66 billion, down from $2.69 billion. U.S. Morning Foods sales now account for about 23.5 percent of total sales, down from about 25.3 percent a year ago. Meanwhile, U.S. Snacks sales have increased from $2.54 billion to $2.7 billion and now account for about 23.9 percent of total sales. 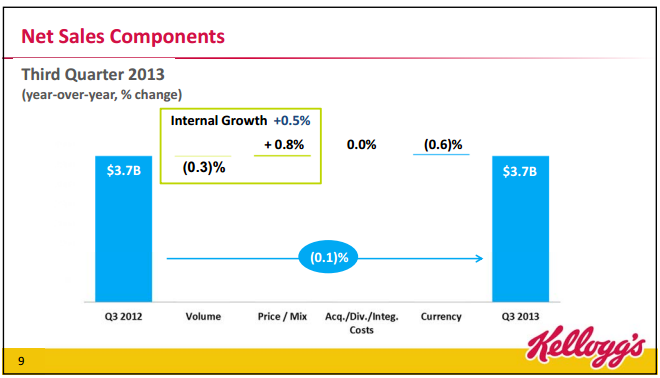 Sales also grew rapidly in Europe relative to other segments, increasing about 16.7 percent from $1.8 billion to $2.1 billion. The moral of the story? There’s a lot to read into about Kellogg’s company strategy, and it is important to remember that its flagship U.S. Morning Foods segment, while solid, is not really a growth driver. Look for top-line growth in emerging markets including Europe, based off the year-to-date numbers, and snacks.

With this in mind, third-quarter earnings included a charge of about 2 cents per share related to the integration of Pringles, which Kellogg bought from Procter & Gamble (NYSE:PG) for about $2.7 billion. The acquisition is the flagship piece of the second item in Kellogg’s company strategy outlined above: Become a global snacks player. With Pringles in hand, Kellogg is competing in the savory snacks big leagues with players like PepsiCo (NYSE:PEP). With its flagship cereal business strong but relatively low growth, look for growth in the snacks segment down the line.

Looking ahead, Kellogg provided pretty favorable guidance for 2013. Full-year net sales are expected to increase between 4-5 percent, indicating a slight slowdown from the current growth rate. Comparable earnings (including forex but excluding costs related to Pringles integration and Project K) are expected at the low end of a range between $3.75 and $3.84 per share, which is in line with current analyst estimates and represents growth of about 4.4 percent. Cash flow, unchanged from previous guidance, is expected in a range between $1.1 billion and $1.2 billion. 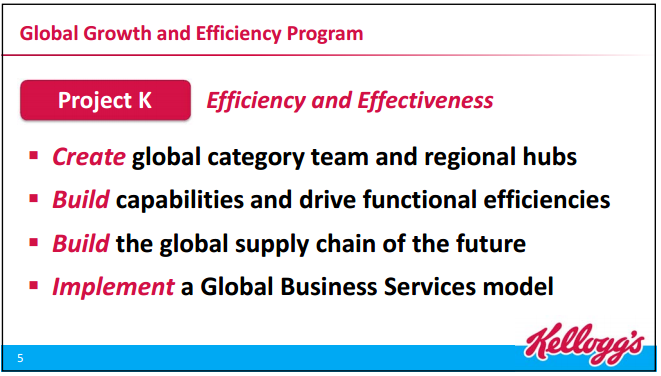 This-quarter earnings also took a 3 cent charge associated with the costs of implementing Project K, a “global four-year efficiency and effectiveness program” that Kellogg announced alongside the earnings report.

Here’s the business speak: ”This project will generate a significant amount of savings, a majority of which will be invested in key strategic areas of focus for the business. The company expects that this investment will drive future growth in revenues, gross margin, operating profit, and cash flow. The focus of the program will be to strengthen existing businesses in core markets, increase growth in developing and emerging markets, and drive an increased level of value-added innovation.”

Specifically, the program will be looking at supply chain infrastructure, reorganization and consolidation of global business services, and a new focus on a category-based model. The program is expected to cost between $1.2 billion and $1.4 billion and will result in a 7 percent reduction of Kellogg’s workforce.

Kellogg has had a fairly turbulent few months on the stock chart. Shares are up about 9.5 percent this year to date but are down 4.4 percent over the past three months. Meanwhile, shares of General Mills (NYSE:GIS), a competitor, have climbed 21.8 percent this year to date, although shares are also down over the past three-month period. At a glance, General Mills is also cheaper than Kellogg at a trailing price-to-earnings of 18.97 compared to 24.73. However, the discrepancy can largely be justified because of Kellogg’s more favorable growth outlook relative to General Mills.