Kellogg Shares Are Cheap, But Should Investors Dig In? 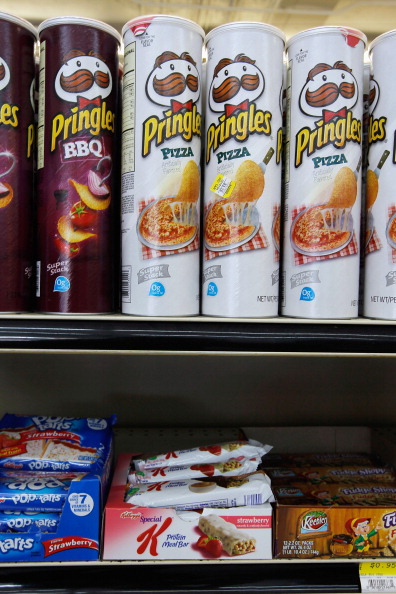 Packaged food companies and consumer products companies have been trading with relatively high valuations. Investors value the stability with which these companies generate cash-flow and return capital to shareholders. In a sense, the companies akin to bonds, but with the potential to generate much greater returns.

However, one well-known company in the sector has been trading at a substantially lower multiple – Kellogg (NYSE:K). Kellogg produces several products that are very familiar from cereals to snack products. While its peers are trading with price-to-earnings multiples that typically exceed 20, Kellogg’s is just 13 — and excluding unusual items, it is 17. So far this year, betting on Kellogg has paid off. The stock is up over 13 percent, and it is trading within shouting distance of an all time high.

On the one hand, it seems as if Kellogg is a great way to buy a consumer products company that has a lot of well-recognized brands, but which is trading at a valuation that is substantially lower than its peers. If you accept this premise, the stock can probably rise another 15 percent – 20 percent before it is trading in-line with its peers. While you wait for this gain, you will collect a 2.7 percent dividend, which isn’t great, but it’s about 50 percent higher than that of the S&P 500. Furthermore, the fact that the stock trades at a discount to its peers means that it will likely offer downside protection if the stock market begins to decline, and if it does decline the company has a stock repurchase program in place, which makes sense given the stock’s relative undervaluation.

However, one has to wonder why investors haven’t bid up shares of Kellogg more. Is there something wrong with the company that makes it worth less than, for instance, PepsiCo (NYSE:PEP)? On the surface it appears not. The company has been growing its sales, and while it saw margin compression a couple of years ago management seems to be fixing this problem. In fact, last quarter sales were down slightly, but profits were up.

One possibility might be related to comments made by Charlie Munger — Warren Buffett’s business partner — regarding cereal producers. Munger believes that cereal production is a lousy business because of the incredible amount of competition, and this leads to margin compression. However, one could make this case for several different areas of food production. Even one of Buffett’s favorite companies – Coca-Cola (NYSE:KO) — competes in many arenas where it doesn’t have the incredible brand recognition that Coke has. For instance, it competes in the coconut water business, which, like cereal production, is very competitive.

Ultimately, it is difficult to see why Kellogg is cheap relative to its peers, and rather than rationalizing this disparity, I think it is one that can be exploited. It is almost never a good idea to make an investment in a stock that is trading at its all time high, and with this in mind, I think investors need to wait for a pullback in the stock before purchasing it. The stock seems to have a lot of support around the $65/share – $66/share level and I think this would be an excellent entry point.

Having established that Kellogg is a solid bet, I think there are two strategies that investors can take. The first is to simply hold the stock long-term. The company has a long history of generating cash-flow and returning capital to shareholders, and while there have been signs of economic weakness, Kellogg is the sort of stock that should outperform in such a scenario.

The second is more tactical. It is based on the assumption that Kellogg, which trades at 17 times earnings, should be trading more in-line with its peers, which trade at over 20-times earnings. The strategy here would be to hold Kellogg shares until it is trading in-line with the broader sector. One might consider taking a short position against Kellogg in one of the higher priced food companies. For instance, Coca-Cola trades at 22 times earnings and yet it has had no growth in the past few years. A long Kellogg/short Coke pair trade seems to make sense at current market prices.

Disclosure: Ben Kramer-Miller has no position in Kellogg or in any of the stocks mentioned in this article.