Krispy Kreme: Doughnuts Are Hot, Stock Is Not 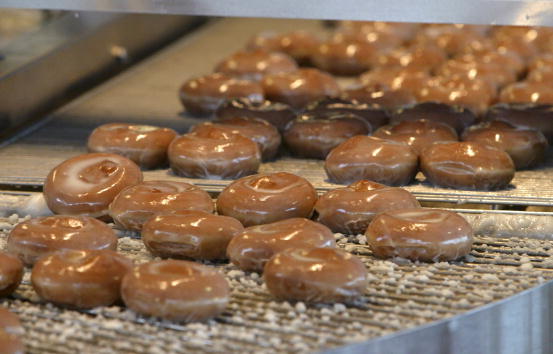 Krispy Kreme Doughnuts (NYSE:KKD) definitely makes delicious doughnuts, breakfast goods, and coffee — but its stock has generally been unreliable at best. It soared and collapsed numerous times, and now the stock could be heading for another tumble after reporting a so-so quarter and giving weak guidance.

In its first-quarter, Krispy Kreme reported earnings per share in line with estimates but fanned on revenues. Revenues increased 0.8 percent to $121.6 million from $120.6 million. Excluding the effects of refranchising three stores in Kansas and Missouri and three stores in Dallas in February and July of 2013, respectively, revenues rose 2.1 percent. Direct operating expenses were $95.2 million, representing 78.3 percent of revenues compared to 80.0 percent of revenues last year. General and administrative expenses rose to $7.0 million from $6.1 million in the year-ago period, and as a percentage of revenues increased to 5.8 percent from 5.0 percent. The increase in general and administrative expenses in the first-quarter of fiscal 2015 reflects, among other things, approximately $400,000 of incremental expenses related to the implementation of a new enterprise resource planning system. Operating income rose 6.6 percent to $16.2 million from $15.2 million.

One piece of good news is that with the exception of the first-quarter last year, company Stores profitability in the quarter was the strongest of any quarter in years. Revenues decreased 1.8 percent to $80.4 million from $81.9 million. Exclusive of the effects of refranchising six stores in fiscal 2014, revenues increased 1.3 percent. Same-store sales at company shops declined 1.5 percent against an extremely robust gain of 12.2 percent in the first-quarter last year. The company Stores segment posted operating income of $4.4 million compared to $5.3 million last year.

Today we reported our highest quarterly pretax earnings for a single quarter in over ten years, a remarkable achievement that reflects the collective efforts of our team members and franchise partners. We note, however, that severe winter weather adversely affected both on-premises and wholesale sales throughout our company store base in the Southeast, and contributed to a 1.5 percent decline in same store sales at company shops against a very tough 12.2 percent same store sales gain in the first quarter last year. Our domestic franchisees, however, who were less affected by weather, posted a gain in same store sales of 4.5 percent on top of an 11.8 percent rise in the first quarter last year. Notwithstanding the increase in first-quarter earnings, we are revising our full-year outlook but still projecting a double-digit increase in adjusted earnings per share. The change reflects, among other things, our first-quarter performance, higher than anticipated investment in a new enterprise resource planning system, and higher costs than we had planned associated with executive management succession.

Taking all these factors into account, we felt it was prudent to revise our expectations for the balance of the year. Finally, the appointment of Tony Thompson as President and Chief Executive Officer of Krispy Kreme provides us with the right leader for the next phase of our development and success. I am personally delighted to have someone of Tony’s caliber and record of achievement to succeed me as CEO, and am confident that Krispy Kremes future will be rewarding for all of our constituencies in the years ahead.

Looking ahead, this stock is a sell. I think it gets to $15 pretty soon. This is because based on the so-so first-quarter results and other current information, management is revising its forecast of adjusted net income for fiscal 2015 to between $48 million and $51 million ($0.69 and $0.74 per share) from $51 to $55 million ($0.73 to $0.79 per share.) This reflects, among other things, an increase in estimated costs related to implementation of new technology systems, higher compensation costs related to management succession, an unfavorable variance to expected results in the first-quarter, partially offset by lower forecasted current income tax expense. Despite these reasons, the company isn’t showing me any reason to hold on to this stock. It shows once more that the stock is unreliable. Around $12-$13 per share the stock will become intriguing as a trade. Until that time, I see no reason to buy.

Disclosure: Christopher F. Davis holds no position in Krispy Kreme Doughnuts and no plans to initiate a position in the next 72 hours. He has a sell rating on the stock and a $15 price target.