What Can Vegas Teach You About Investing? 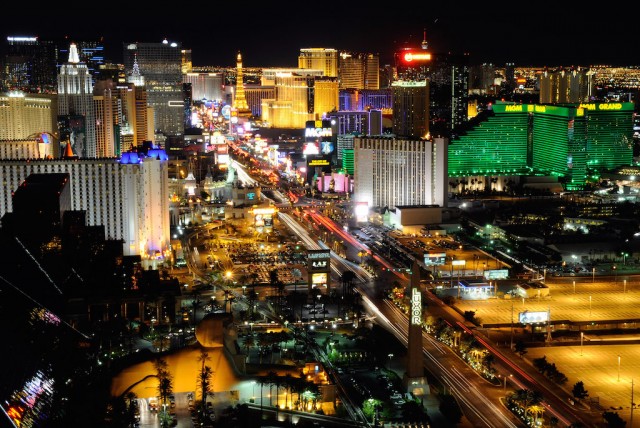 Las Vegas is Sin City. The land of all-night bachelor parties and neon-light escapades is the perfect setting to live out all of your fantasies, for the right price, of course. However, even if you don’t set foot in America’s champagne room, you could still feel a brutal financial hangover. Just ask investors who placed their bets on the city’s hotel and casino industry.

You never want to overplay your hand. This is true whether you find yourself in Vegas or on Wall Street. With the economy slowly pulling itself back together, you’d think discretionary dollars would start flowing back to the craps tables and trickle down to shareholders. The headline unemployment rate has been cut in half, job openings are reaching record highs, and the hotel industry logged its best year ever in 2015, with the average weekly occupancy rate climbing to 65.9%. Yet, while the broad stock market has recaptured new highs and then some, casino stocks have been taken out to the Mojave Desert.

Investors betting on casino stocks to return to their glory days in the wake of an economic recovery have been sorely disappointed in recent years. In fact, the biggest names in Vegas are some of the biggest losers for investors. Shares of Las Vegas Sands and Caesars Entertainment have plunged 44% and 63%, respectively, over the past two years. After peaking at $249 in March 2014, shares of Wynn Resorts crashed 72% to finish 2015 at only $69. MGM Resorts International managed a modest 3.4% decline, and Boyd Gaming is the obvious outlier with a 76% gain.

You can blame the declines on the usual culprits like a Macau recession and perpetual Chinese growth fears, or the lingering effects of the Great Recession in the United States, but casting blame on factors you can’t control won’t replace your investment losses with gains. Mr. Market always has the ability to surprise you, especially in the short term. No matter how certain you are of an investment opportunity, you must always consider the alternative that you might be wrong. You should also consider that there’s probably more than one way to make money on your investment thesis.

The stock market isn’t the only game in town. Sure, it’s the game you hear billionaires Warren Buffett and Carl Icahn playing all the time, but there are other ways to put your hard-earned dollars to work. For example, the real estate market is once again occupying headlines. In 2015, home flipping increased in 75% of domestic markets, and the total number of investors who completed at least one flip was at the highest level since 2007, according to RealtyTrac. Homes flipped in 2015 yielded an average gross profit of $55,000 nationwide, the highest amount in 10 years. The number of investors who completed at least one flip in 2015 reached its highest level since 2007.

“More inexperienced home flippers with a smaller financial cushion could be a sign of an over-speculative market, but the data indicates that flippers in 2015 continued to operate within relatively conservative margins,” said Daren Blomquist, senior vice president at RealtyTrac, in a press release. “Homes flipped in 2015 were on average purchased at a 26 percent discount below estimated market value and re-sold by the flipper at a 5 percent premium above estimated market value.”

Despite the stock market saying it’s the worst of times for Vegas investors, the housing market is proclaiming it’s the best of the times. RealtyTrac also finds that Vegas is one of the best places in America for home flippers targeting homebuyers aged 20 to 34, based on average flipping returns along with demographic data from the U.S. Census. Vegas zip code 89119 achieved a 57.5% gross return on investment.

Who knows how long the Vegas hangover will last on Wall Street, or how much longer the home flipping trend will continue. Vegas stocks are already looking to rebound, as Wynn is one of the best performers in the market this year. One thing is certain: Doing your due diligence, diversifying your dollars, and avoiding an all-in mentality on investments can help you avoid going bust.