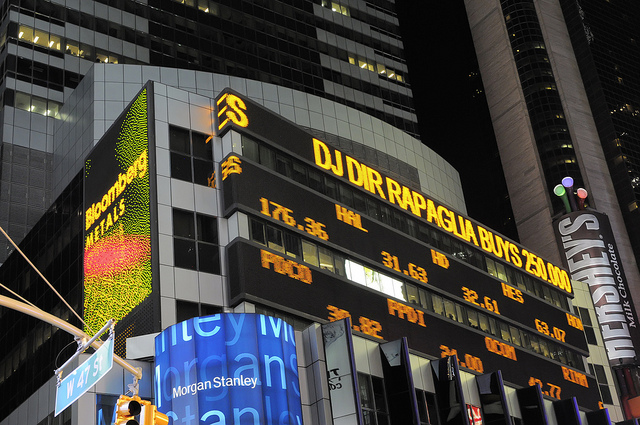 Shares of Morgan Stanely (NYSE:MS) are moving up in Friday trading in the wake of the bank’s latest quarterly report that saw earnings drop despite a strong performance from Morgan Stanley’s growing wealth management operations. A hefty $1.2 billion in legal fees was the primary driving force behind the profits slump, which fell to $192 million — or 7 cents a share — inclusive of special charges, down from the $661 million, or 33 cents per share, from the same period of 2012. The expenses also triggered a $1.1 billion pretax loss at its institutional securities business, which the New York Times notes has seen its share of struggles over the past 12 months.

Without the charges taken into account, Morgan Stanley’s profit would have rung in at 20 cents per share. Had the impact of litigation and legal expenditures been added and a tax benefit been subtracted, Morgan Stanley’s core earnings would be 50 cents a share, beyond Wall Street’s estimate of 45 cents a share, according to a survey of analysts conducted by Thomson Reuters.

“Our fourth-quarter results demonstrated the consistency embedded in our business model, as revenues increased year-over-year in all three of our business segments,” James P. Gorman, the bank’s chief executive, said in a statement. “Importantly, we are continuing to address many of the legal issues from the financial crisis.”

Revenue came in at $8.2 billion, up from the $7.5 billion recorded for the year-ago period once debt-related charges are left out. The bank will also issue a 5 cent per share dividend, and bookmarked $4 billion for compensation in the fourth-quarter, up from $3.6 billion from the year prior.

Morgan Stanley’s decision to shift from trading practices to the safer wealth management banking may have benefited the bank rather significantly. Both Citigroup (NYSE:C) and Goldman Sachs (NYSE:GS) saw substantial declines in their fixed-income trading operations, with ended up hurting their earnings.

Morgan Stanley’s wealth management division reported net revenue of $3.7 billion with a pretax margin of 19 percent, up from the $3.5 billion and 17 percent that the bank reported a year ago. Asset management also put on a 7 percent gain year-on-year.